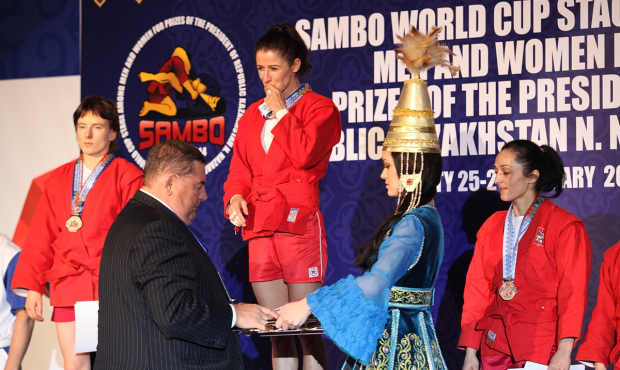 The first day of the World Cup Stage for the prizes of the President of the Republic of Kazakhstan Nursultan Nazarbayev stuck in memory for faerie show, active stands support and favorites overthrow. Read our report from the scene – about capacity crowd, the best presentation of the state and the victory right in front of a two year old child’s eyes.

A friend calls me and asks:

- What are your plans for the weekend?

- You have my sympathy. And we’re going to SAMBO...

One of the organisers of the World SAMBO Cup Stage for the prizes of the President of the Republic of Kazakhstan Nursultan Nazarbayev told us the story on the threshold of the tournament start. As yet as in the early morning we managed to ensure the fact that not only his friends, but a few thousand people more preferred to spend the weekend watching SAMBO competitions. Viewers filled the stands of the Palace of Sports and Culture named after Baluan Sholak densely almost with a starting whistle of the referee. The traditional Kazakh Tournament, which this year moved from Uralsk to Almaty, aroused a really great interest among the local fans.

This situation is connected with both traditional Kazakhs’ love of combat sports, and the organisers’ efforts, who advertised the competitions, having used advanced multimedia features as much as possible. Videos with the announcement of the Tournament were showed on all advertising plasma panels of the city, besides anyone who even occasionally switches on local and international TV channels, probably saw a commercial video of the competitions. SAMBO beckoned, and those who had succumbed to this temptation, really enjoyed the “tasty” spectacle.

SAMBO beckoned, and those who had succumbed to this temptation, really enjoyed the “tasty” spectacle.

The morning part of the competitions possessed an opportunity to see SAMBO masters from different countries in action. Around 350 athletes representing 17 countries participated in the Tournament, and each of them came to demonstrate his skills and compete for victory. As early as on the day of arrival many SAMBO athletes together with coaches pored over lists of participants attentively and concluded that this Tournament was rich in famous names. That’s why rivals tuned to each other accordingly. Viewers were able to see that real people instead of titles performed on mats, watching the many defeated by the world champions during the race. Contest is constantly increasing in SAMBO, and it is evident at every major international start.

In addition to the sports component, the Tournament entertainment was provided thanks to the wonderful show given by the organisers in the evening program. It all began with the Opening ceremony and didn’t stop until after the final duel meets. Bright national dances, unveiling judges presentation, spectacular parade of teams – seemingly traditional SAMBO tournaments things looked new and impressive in Almaty. As impressive as the Kazakh viewers’ stormy and loud reaction to their state team presentation.

"Kazakhstan is one of the strongest SAMBO countries in the world".

- Kazakhstan is one of the strongest SAMBO countries in the world, – began his speech Vasiliy Shestakov, the President of the International SAMBO Federation. – At the World Championship held in St. Petersburg the Kazakh team took the second place in the overall standings in Combat SAMBO and the third – in Sports SAMBO among men. Today, I am also pleased to congratulate all SAMBO fans that on January 16 in Manila SAMBO was included in the Olympic Council of Asia. In 2015 SAMBO is planned to participate in the European Olympics and many other major multi-sport competitions. I want to thank the organisers for the excellent organisation of the Tournament, as well as to say kind words addressed to the President of Kazakhstan Nursultan Nazarbayev for his personal contribution to SAMBO support in the country.

Saken Meirbekov, the President of the Kazakh SAMBO Federation, in his turn, recalled that the Tournament opens the calendar of international SAMBO competitions, and expressed the hope that it will be annually held in Almaty.

- As the President of our country said, “the world sports achievements – are the best presentation of the state”. I am sure that today all athletes will try to prove themselves in the most dignified manner, and present their state in such a way. And the Almaty viewer will get a lot of impressions thanks to this, – said Saken Meirbekov.

“The world sports achievements – are the best presentation of the state”.

After the World Cup Stage for the prizes of the President of Kazakhstan Nursultan Nazarbayev had been officially declared open, the awarding ceremony of honoured workers of SAMBO was held. Vasiliy Shestakov, the FIAS President, and Saken Meirbekov, the President of the Kazakh SAMBO Federation, presented the FIAS orders and memorable souvenirs.

And then – driving music, darkened room and tricks of light during SAMBO athletes’ coming for duel meets. The competitions entourage turned out to be in the best traditions of exciting combat sports, making a fan’s heart beat faster, and eyes – follow every movement of SAMBO athletes on the mat closely. It really worth looking at it!

Girls in the bantamweight of up to 48 kg set an attitude of mind. First the Russian final was setting in favor of titular Elena Bondareva, who led by a close shave. However, Gayane Arutyunyan, her opponent and a team mate managed to turn the tide of the match and win by a score of 2-1. The final judge’s whistle was the reason for Gayane to throw all her joyful emotions.

“We meet with Lena constantly at various competitions and, of course, know each other very well, – she said in an interview to the journalists. – Therefore, fights are always carried out in equal fight, and the winner is the one who is stronger. The score of victories is, unfortunately, not in my favor. But I will fight to the last. And today, I managed to turn the tide of fighting and hold the victorious throw, primarily due to the belief in myself”.

“We meet with Lena constantly at various competitions and, of course, know each other very well".

Last year Gayane Arutyunyan also won the first World Cup Stage held in Kazakhstan, in Uralsk. “Today my victory was gained much more difficult than a year ago, – added the winner of the gold award, which is also the winner of the overall World Cup following the results of 2013.

Of course, the finals with the participation of masterful opponents are of interest to all SAMBO fans, but when one of these athletes is your compatriot, interest increases significantly. Rivalry in the final duel meets between the Kazakh and Russian SAMBO athletes caused the most stormy reaction in the stands. Supporting their athletes vocally, fans created a powerful sound effect, designed not only to help the Kazakh participant, but also have an effect on his opponent morally. Assylbek Alkey appraised the effect of such support – the representative of Kazakhstan defeated the Russian citizen Yury Saifutdinov in the finals.

“Native walls helped greatly – the competitions were held in Almaty first, and all the viewers rooted for me. It’s really pleasant to win at home at such a strong tournament, I’m glad, – Assylbek said. – In addition, I had a special fan. In front of son’s eyes, I simply had to win the Tournament today. He is only 2.5 year old, but he was in the stands and supported me very well”.

"In front of son’s eyes, I simply had to win the Tournament today".

Everyone has its own motives for the victory. For example, the Russian Sergey Razin set a goal early in the season. And I decided to make it happen at any cost. This is probably what helped him to win at the Tournament final in Combat SAMBO against the representative of Kazakhstan Abylay Tolesh.

“I initially selected a difficult plan for this year, – said Sergey Razin. – The World Cup consists of four stages, following the results of which the winner of the overall standings will be awarded the title of the “International Master of Sports”. And I set myself such a task. And I tuned in a special way for this Tournament, as for the most difficult of all. Because it takes place in Asia, and here very good fighters are brought together, and the contest is incredibly high. I prepared very seriously and very happy that I won. But I did only the first step”.

The Romanian SAMBO athlete Daniela Hondyu also shared her plans for the season with the FIAS website. At the finals of the weight category up to 56 kg she lost to the Russian Diana Aliyeva. The SAMBO athlete answered to the question whether she was satisfied with the silver medal:

“I’m not satisfied at all. It happened so that I didn’t hear a coach’s hint, and didn’t do what I had to at the right time. The Tournament in Kazakhstan is a control one for our team on the eve of preparation for the European Championship in Romania. This year I established a goal to become the first in Europe and in the world. I am sure that I’m capable of and ready for it. Now we’ll come back home and work at mistakes – I think we’ll devote a lot of time to the mat”.

"Now we’ll come back home and work at mistakes – I think we’ll devote a lot of time to the mat”.

If Daniela Hondyu’s awards and titles are ahead, the American Nina Kutro-Kelly can already boast a solid set of achievements and awards, moreover in various types of combat sports: from wrestling and judo on out to SAMBO and Brazilian jiu-jitsu. A trip to Kazakhstan turned out to be very successful for Nina – she won in the weight category over 80 kg. Later on we’ll tell what emotions she experienced from this victory and what kind of sport is considered the best on the FIAS website – in an extensive interview with Nina.

And now it’s high time to keep your fingers crossed and actively worry about your favorites – the second day of the World SAMBO Cup in Kazakhstan is ahead.