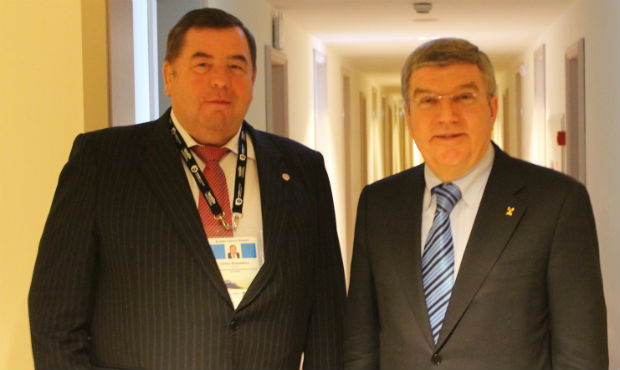 Thomas Bach did not need an introduction to sambo from Vasily Shestakov. It turned out that the IOC chief has first-hand knowledge of this combat sport: IOC director general Christophe Dubi, who previously held the post of Sports Director and cooperates closely with the FIAS in respect of sambo’s Olympic bid, had already immersed the IOC chief in the history and present-day life of this unique combat sport, which is rapidly developing all over the world and winning the love of more and more new fans and admirers.

After greetings had been exchanged it was time for the details and specifics. The meeting discussed the main points in the FIAS’s bid for IOC recognition, which is currently being processed by International Sambo Federation experts. Thomas Bach expressed his confidence that the work that the FIAS is currently doing in close cooperation with IOC director general Christophe Dubi and the new IOC sports director Kit McConnell as part of the work on the FIAS’s bid book will be successful. The head of the IOC noted the key issues which the International Sambo Federation will need to address in the very near future. These include nuances in the work of some FIAS commissions – the women’s, athletes’ and ethical commissions. Thomas Bach noted the FIAS’s successful work in this area and expressed his confidence that the federation will have addressed all the necessary issues in good time in the very near future.

Shestakov in turn made the following comment on the success of this important meeting: “Thomas Bach made a very positive impression on me. I would like to note that I was surprised to find how well he knows sambo, both its history and its essence. I would like to note that the atmosphere of the meeting was very warm and friendly. This was my first meeting within the framework of the SportAccord Convention’s work. It was a good, powerful start.”

The FIAS delegation still has a lot of interesting work to do as part of the work of the Convention, which is currently underway in Belek, Turkey. We shall bring you up-to-date reports on other developments in this work from the modern-day heart of the sports industry, which is what Belek has become for these few days. Take a look very soon at our television report on the most interesting news from the SportAccord Convention, and of course in relation to sambo.