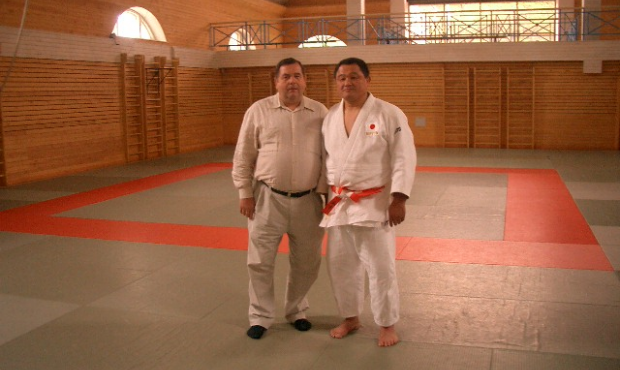 President of the International Sambo Federation Vasily Shestakov who is also a member of the State Duma of Russia, for many years has a direct relation with sport. When Shestakov was in the role of coach and mentor these relationships were largely educational in nature. Today, they have administrative nature because he is the head of an international organization that develops and promotes of SAMBO in the world. And of course, legislative nature as being a member of the profile committee of the State Duma of Russia Vasily Shestakov faced legislative questions in the field of physical culture and sports every day in his work. But there is one more facet of the relationships between Shestakov and sport. About it we will tell in today’s report.

This history has begun in the beginning of deputy activity of Shestakov. When choosing committee on inter-parliamentary cooperation, he stopped at the Japan (where the judo was born). It was a logical choice since Vasily Shestakov has titles of master of sports in Judo and Honored coach of Russia. In addition, Japan has always been a country which he was attracted to by its unique philosophy and culture. So Shestakov linked his life with work in the inter-parliamentary commission on relations with Japan.

During 10 years in the commission Vasiliy Shestakov and his colleagues conducted many successful projects. After the tragedy in Beslan, when terrorists captured Russian school and a lot of children have suffered as a result, many of them subsequently rehabilitated in Japan. Friends and colleagues from the land of the rising sun organized to Russian kids gorgeous cultural program full of excursions, travels around the country, and entertainment.

After the tragedy in Fukushima, Russia is also have not stood aside and took on Russian soil children - victims of technological disaster. Kids have got acquainted with Moscow, make friends with their peers from Russia, regained strength and health.

"This is a force majeure, tragic situation, but we are certainly working also in a normal mode. On permanent basis athletes of our countries hold joint training, the young Russian athletes often are trained in the country where judo was born.

We often organize workshops and seminars of famous Japanese judoka, which are very popular among a wide circle of admirers of the "soft path" - children, athletes - members of the Russian team, coaches, experts, judges "- commented work of the Inter-Parliamentary Group for Relations with Japan Vasily Shestakov.

Very interesting was the idea of Shestakov of trip to Japan of deputies of the State Duma from each party; among them were the greatest star athletes such as - Alexander Karelin, Anton Sikharulidze and Svetlana Khorkina. All of them made demonstration performance, gave numerous autographs and, of course, contributed to the convergence of our people, which the commission so anxious to achieve in its work. And of course, the parliamentarians did a great job in experience exchange in the field of law-making in the field of physical culture and sports. It is always useful and productive.

Also as part of the commission's work and with its help and support takes place promotion of SAMBO in Japan. The thing is Vasily Shestakov is a longtime friend of the legend of world judo - Yasuhiro Yamashita. They know each other for a long time, more than 10 years. Over the years their friendship has become only stronger and borne fruit not only in judo, but in SAMBO.

With the help of Yasuhiro Yamashita and his colleagues - President of Sambo Federation of Japan Masaaki Kondo and member of the Executive Committee of the FIAS Nobuyuki Asai SAMBO in Japan now on the rise. In February of this year land of the rising sun successfully held All-Japan SAMBO Championships for the prize of the President of Russia, and in July in Kazan Japan national team won in SAMBO five medals, including two gold medals. We can say that now of SAMBO in Japan is experiencing a "boom".

"For me, the work in the committee is not only those projects which are mentioned above, but also the many friends that I met during this time. Besides Yasuhiro Yamashita and Nobuyuki Asai - my co-workers in SAMBO, which we have already mentioned, I also met with the Director General of the Department for European Affairs, Ministry of Foreign Affairs of Japan Toehisa Kozuka. Now we are great friends and enjoy good relations for the past many years. During numerous visits to Japan I also managed to meet with many prominent Japanese politicians, representatives of big business in this country. Such meetings are important: it is the exchange of experiences and opportunities for professional growth. "

Here's a story we have today about the sport. A story about the sport and in the same time about friendship, mutual assistance and charity, without which, one could not achieve anything in sports