Japanese “King of the pick-up” awarded medals to SAMBO practitioners 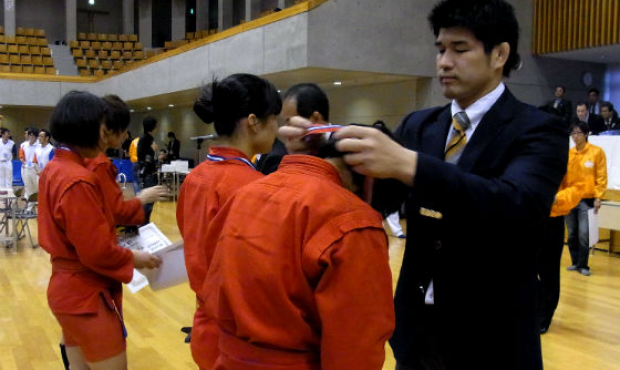 It took him only 18 seconds to win in the final of the Sydney Olympics and his performance of one foot pick-up is still considered to be the standard technique. Now he works in sports and continues to practice judo in England, the judo star is married to Aki Higashihara, the Japanese actress and TV presenter. The couple has two children – a boy and girl.

During the student’s tournament in Japan the legendary Kosei answered a few of questions for the FIAS site.

– Kosei, what do you think of SAMBO?

– At the Olympic Games in London we all watched the unprecedented success of Russian judoists. In many ways, I think this is due to wrestling school which they have in Russia. I am sure that in youth many wrestlers went through the top-rank SAMBO school which is incredibly diverse both in stance and on the mat (wrestling in a lying position).

I remember the duel meet of my compatriot – Rick Nakayama, the World Champion of 2011 – with the Russian in the final who won the London Olympics in the main fight for himself. Besides, in the duel meet the Russian had a real attempt to execute a painful arm lock. I do not know if Isayev was engaged in SAMBO but SAMBO in Russia for sure has had a positive impact on Russian judo technique and certainly enriched it.

– What is the reason that you, the judo star, appeared to be here at the competition in SAMBO?

– I’m here as the honoured guest, “due to the fault of” Nobuyuki Asai, a member of FIAS Executive Committee, it was he who invited me to SAMBO festival in Saitama.

And, you know, I like SAMBO. Today I saw a rapid-fire and very diverse wrestling, an interesting mat with plenty of painful holds, both foot and arm locks. I am pleased that now SAMBO is developing in my Motherland. I hope that this will bring us an additional push to the development of sports.