Meeting of the FIAS Executive Board 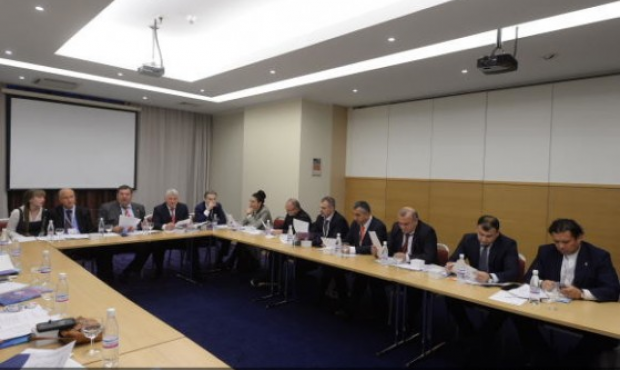 The agenda of the meeting of the International SAMBO Association’s Executive Board included many pressing matters, including the SAMBO events calendar for 2015–2017, the establishment of FIAS committees, the celebration of SAMBO’s 75th anniversary, the conferring of awards to the greatest contributors to the sport’s development, as well as the establishment of coach training programme, and the FIAS’ future anthem. The following is a detailed account of the resolutions.

The SAMBO events calendar for 2015–2017, approved today by the Executive Board, demonstrates the vast geography of our sport both in terms of organisation and staging the events. This year’s World Championships will be held in Morocco, Bulgaria and Russia, while Global Youth SAMBO Forums will be hosted by the United States, Romania and Austria. The Executive Board also approved the venue and dates of the World Championship Among Cadets, held biannually for students, and the World Cup. In 2016, the cadets’ competitions will be hosted by Limassol (Cyprus). The Executive Board approved the calendars of the World Cup stages (with a prize fund of $100,000) and other international tournaments of various categories.

The members of the Executive Board discussed the need to launch coach training programmes in the nearest future. The initiative involves creating a single database of coaches with clear ranking, followed by their training through the FIAS coach programme. The programme embraces all SAMBO levels, and the coaches will acquire valuable knowledge of teaching techniques as well as SAMBO skills, attested to by respective FIAS certificates. The training programme will be hosted by the Russian State University of Physical Education, Sport, Youth and Tourism. It will shortly be submitted for the Board’s review, and is to be launched subject to approval at the next meeting of the Board.

Today the Board also reviewed and approved a new list of FIAS committees and their heads. The formation of new committees was put up for discussion in connection with IOC requirements stipulating that heads of any committees be representatives of national federations. The new set of committees, covering all the activities of today’s sports organisation – from ethics to finance – will now be chaired by representative of SAMBO federations of many countries, including Austria, Morocco, Japan, Nicaragua, Panama, Belarus, Uzbekistan, Colombia, Latvia and Spain.

SAMBO’s 75th anniversary, widely celebrated worldwide, was also on the agenda today. The final events are scheduled to coincide with the World Championships. Tomorrow’s opening ceremony features a number of events commemorating the anniversary: cancelling the special edition “75 Years of SAMBO” stamp, handing out awards to SAMBO veterans and stars, and a ceremony celebrating the achievements of retiring SAMBO legends Irina Rodina and Rais Rakhmatullin. Among the SAMBO stars to be decorated with FIAS medals are Česlovas Jezerskas, Mikhail Tikhomirov, Murat Khasanov, Fyodor Emelianenko, and many others. We will not announce all the names, for in a matter of mere hours the greatest contributors to the development of our sport will be announced by the FIAS to the 7000-strong audience of the Yubileyny Arena.

Another important announcement to be made at Yubileyny is the project to develop a FIAS anthem, which was reviewed by members of the Executive Board today. The anthem was written by young Russian composer Sergei Petrov (who, incidentally, is the brother of world-famous Formula 1 driver Vitaly Petrov). The triumphant and moving anthem was acclaimed by the FIAS executives. It will be ‘given a try’ at the opening of the main SAMBO event of the year, after which it will be put to a members’ vote. If the global SAMBO community accepts it, the anthem will be put up for approval at the next meeting of the Executive Board.

The 2013 World Sports and Combat SAMBO Championships kick off tomorrow with preliminary rounds at 10am. The final part will start at 6pm. To see the best of SAMBO, come to Yubileyny or watch the event online at www.sambo-fias.org.