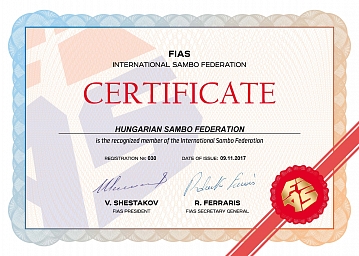 At 2009 & 2010 of September, Sergey Zhigarev from Ivanovo University Sambo team conduct technical education for two weeks. At November of 2011 the Hungarian Sambo athletes participated in the Austrian international tournament and achieved Medal success (Frank Blázer in combat sambo, Gabor Arva in sport sambo). The federation have good connecting with National Martial arts media, and televisions, and looking for the possibilities to popularize a Sambo in Hungary. At 2012 the students of the central club of federation hold a Sambo demonstration on National sport festival and National Fitparade too. In this year, the Hungarian athletes participated in Bratislava open tournament, and won five medals. The first sambist, who attended in World championship was Aron Eszes in Minsk (- 74kg, combat sambo category).

At 2013 two sambist participated in Kharlampiev tournament in Moscow (Aron Eszes, Otto Foltin), and then Aron Eszes have fight in European championship in Crema too. On the ESF Congress, which was organised at the same time, the Hungarian Sambo Federation was accredited and got the membership in the ESF. The Federation have contact with the NOC of Hungary aim of Federation wishing to become a full member of the NOC.

At 2013 one sambist participated in World championship, she is Fruzsina Forgó.