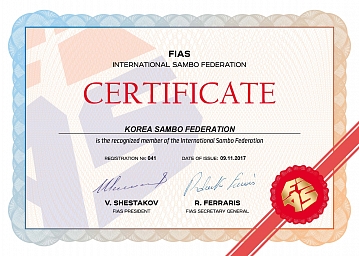 Korea Sambo Federation (KSF) was established in 2003, member of Korean Sport & Olympic Committee since 2009. KSF has 17 regional branches, 60 gyms as members. 730 men and 85 women are members of KSF, there are 2500 sambists in Korea including children. List of awards:

World Youth and Junior Championships was held in October 2014 in Seoul, World Championships – in November 2019 in Cheongju. FIAS President's Cup is held in Korea annually since 2015.