10 ideas of why SAMBO in Japan has a great future 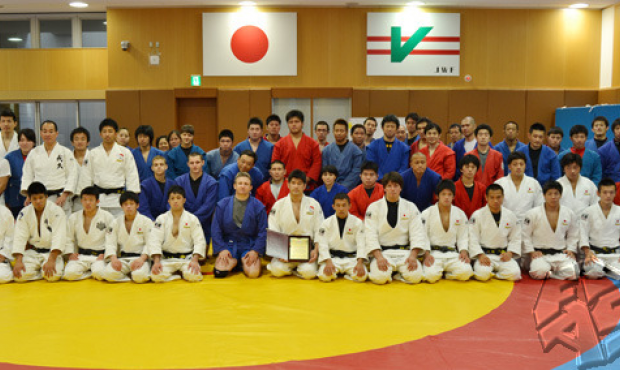 FIAS website has already told about a huge public reaction, which was caused in the Japanese media by the FIAS sports delegation’s stay in Tokyo. Throughout the week, the FIAS experts under the leadership of Sergey Tabakov, the International SAMBO Federation Executive Director were participating in the preparation of the Land of the Rising Sun team to the upcoming Universiade, as well as conducting seminars for coaches. But the FIAS mission in Japan has gone the extra mile. Now it’s high time to total all the pluses of the event which lead us to some definite positive ideas. The FIAS website offers at least 10 ideas of why SAMBO in Japan has a great future.

The initiators of the seminar for athletes and coaches were the International SAMBO Federation and the Japanese SAMBO Federation with the active support of the Japan Russia Youth Exchange Center. FIAS seeks to develop SAMBO all over the world and promotes this good purpose in all possible ways, one of which is, of course, on-site training. Japanese SAMBO athletes like to learn and are good at it, and therefore set a high value on the opportunity to learn the subtleties of SAMBO art from the masters. And if such an opportunity appears before the Universiade, it cannot in nature be missed. In its turn, the Japan Russia Youth Exchange Center sets one of its major objectives to develop relations between the two countries, including in the field of sports. There is an extremely favorable coincidence of wants of all parties.

Not every delegation representing the sports federation, find themselves at the Russian Embassy at a reception in its own honor on arrival in Japan. The FIAS delegation fall into this category. Yevgeny Afanasyev, the Russian Ambassador Extraordinary and Plenipotentiary in Japan held a reception in honor of the representatives of the International SAMBO Federation, which was attended by heads of various sports organizations in Japan. Among the guests were Fukuda Tomiaki, the Vice-President of the Japanese National Olympic Committee, Masaaki Kondo, the President of the Japanese SAMBO Federation, Nobuyuki Asai, a member of the FIAS Executive Committee and other distinguished guests.

Yevgeny Afanasyev warmly welcomed all those present and pointed out the role SAMBO plays for both countries in his speech: “At the meeting of the Russian President Vladimir Putin and Japanese Prime Minister Sindzo Abe they have reached an agreement to conduct the exchange of experts in the field of combat sports between the two countries in 2014”, – underlined the Russian Ambassador Extraordinary and Plenipotentiary in Japan.

They say those who do not know the past has no future. Perhaps, everybody knows the fact that the Japanese venerate traditions. During the FIAS delegation’ visiting the Kodokan Institute, they managed not only to touch the history of judo, but also to sign a kind of “project of intents”. Head of the Scientific and Research Department of Kodokan Naoki Murata, knowing that FIAS conducts research on the history of SAMBO, offered to cooperate in the study of Judo and SAMBO in the USSR and Russia. He said that he had written a big monograph on the judo development and spread in the world. Collaboration in research of Oshchepkov, Spiridonov, Kharlampiev and other prominent SAMBO enthusiasts’ activities surely can give interesting results.

One of the training sessions, which was conducted for Japanese athletes by the FIAS representatives, was attended by the Japanese national judo team. Chief coach of the team is the Olympic champion and three-time world champion Kozey Inoue. They not only took part in the general training session together with SAMBO athletes, but also asked them to show definite holds and tell about fighting methods. Judoists paid special attention to the work on the ground, learning some SAMBO best practices that can be applied in judo. In today’s SAMBO it is perhaps the first step from the Japanese judoists forwards and the recognition that they can and should learn from each other. In the future they plan to invite SAMBO athletes for a more detailed analysis of certain points. By the way, as the FIAS representatives noticed the current Japanese SAMBO team consists of the overwhelming number of former judoists. But 15 years ago they were more freestyle wrestlers. There was even the ban for judoists to compete at SAMBO competitions.

A lot of the Japanese with famous names in the world of combat sports spoke positively about SAMBO and the FIAS work during the trip. You can learn their point of view in the next issue of the FIAS video magazine on our website. Today, we would like to focus on the opinion of Katsuhiko Kasiwadzaki, who won the SAMBO tournament in Baku in 1975. Being one of the first judo world champions, who took part in the SAMBO competitions, he became famous for its excellent ground fighting technique. Mr. Kasiwadzaki highly appreciated the level that the FIAS specialists demonstrated during training sessions and gave a very flattering estimate of the ground fighting methods.

To prepare a good athlete, you need to create the most favorable conditions for training sessions. The National Training Center in Tokyo can serve as an ensample. Created for the Japanese athletes preparation for the Olympic Games in Beijing, this modern sports complex with specialized gyms in many sports includes an excellent rehabilitation center with swimming pools. Meals are provided on the “smorgasbord” system, and besides there is a comfortable hotel for guests, the rooms of which have everything for sports and leisure. All this splendor is located almost in the center of Tokyo. Preparations for the starts of the leading national teams in various sports are usually carried out in this training center. Here, in the wrestling gym, courtesy of the Japanese Wrestling Federation, the FIAS representatives conducted training sessions in SAMBO.

Largely because of this eminent judoist and active sports organization man SAMBO is developing at such a rapid pace in Japan today. He personally was one of the main initiators of the FIAS delegation visit of the Land of the Rising Sun. Mr. Yamasita reaffirmed his intention to promote SAMBO in the future. A meeting with the legendary athlete was held in an informal setting. “I was very pleased to talk with Yasuhiro Yamasita in such a relaxed situation, and for our young people it generally seemed to be something previously unattainable – like a dream”, – shares his impressions FIAS Executive Director Sergey Tabakov.

8. Introduction to the traditions

A rich program of the FIAS delegation’s stay in Japan except of intense training sessions assumed the opportunity to join in the traditions of the country. They arranged excursions in Hakone National Park, which contains historical reconstructions, for guests, organized a trip to the lake Asinoko by boat, visiting the valley of geysers Ovakudani, a trip to the Open Air Museum. “This is a gorgeous museum, we were all impressed! There is a collection of not only Japanese sculptures, but also works of art from around the world”, – says Sergey Tabakov. In addition, the FIAS representatives visited one of the largest aquariums, which is located on the sea shore, and also visited the city of Kamakura (Big Buddha and Shinto temple).

There were legends about the Japanese diligence long ago, but punctuality has been often considered the hallmark of the Germans. However, the FIAS representatives managed to make sure that both these virtues equally belong to the residents of the Land of the Rising Sun. First, the program of the FIAS delegation’s visit of Japan was sustained to the nearest minute. Second, during training sessions athletes and coaches don’t talk to each other but look at the master who teaches them very carefully and take heed to his every word. Third, Japan is very respectful to elders and guests. Taken together, these factors allow us to say that SAMBO has huge prospects in Japan.

10. The Japanese desire to lead

Totaling up all the pluses of the FIAS delegation’s stay in Japan, the International SAMBO Federation Executive Director Sergey Tabakov pointed out that this country could become one of the SAMBO leaders on the Asian continent. There are traditions, a team of like-minded people who can implement serious ambitions, as well as support from the state, NOC and sponsors there. In addition, “SAMBO Cup of the President of Russia Vladimir Putin” is annually held in Japan, and it’s also possible to hold the World Championship there in the future. And the current visit of the FIAS representatives had its major objective to prepare the Japanese team for the 2013 Universiade. How well the Japanese SAMBO athletes learned the lessons taught, we will know very soon – in Kazan in July.