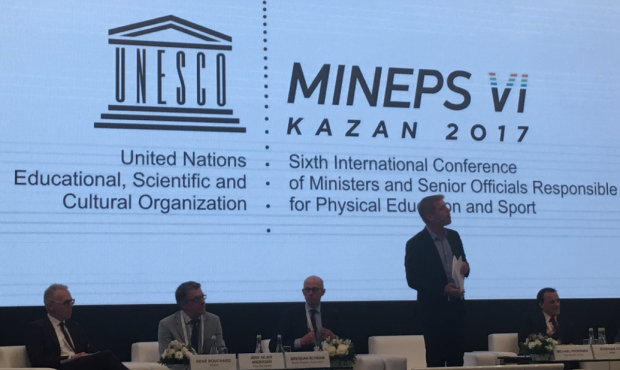 The Sixth International Conference of Ministers and Senior Officials Responsible for Physical Education and Sport, MINEPS VI, was held in Kazan, Russian Federation, from 13 to 15 July 2017.

Driven by the desire to strengthen sport’s integrity, inclusivity and its contribution to the UN goals of sustainable development, 116 member countries of the UNESCO endorsed the ‘Kazan Action Plan’ at the end of the sixth International Conference of Ministers and Senior Officials Responsible for Physical Education and Sport, MINEPS VI.

The action plan, which is named after the host city of the conference Kazan in Russia, encourages the countries to acknowledge 20 political goals grouped in three main policy areas:

1. Developing a Comprehensive Vision of Inclusive Access for All to Sport, Physical Education and Physical Activity

2. Maximizing the Contributions of Sport to Sustainable Development and Peace

3. Protecting the Integrity of Sport

Among the specific political goals are the enforcement of gender equality, the fostering of inclusive participation and the establishment of multi-stakeholder partnerships. Moreover, the action plan links sport and physical education to the UN Agenda 2030 on sustainable development goals by pointing at how sport can contribute to improve health and well-being, city environments, safe and inclusive societies, and other sustainable factors.

Finally, the Kazan Action Plan lists five political goals on the integrity of sport. It highlights the need to ensure and strengthen the combat against doping and match-fixing, and to foster good governance among sports organisation. Futhermore, it establishes the responsibility of governments to safeguard athletes, spectators and workers as well as to protect children, youth and other vulnerable groups.

How many countries will follow all the recommendations – and to what degree – is still an open question. As a representative of Benin said when he had called for a more committing process in the future, good ideas and recommendations tend would be forgotten as soon as the meeting is over – rather than being implemented. A non-binding paper does not guarantee change by itself.

However, in contrast to earlier international conferences, the Kazan Action Plan also commits UNESCO to taking five concrete steps in co-operation with a broad range of stakeholders in sport from governmental and inter-governmental institutions to sport organisations, universities and NGOs. The actions aim at collecting and disseminating arguments and evidence supporting the political objectives.

More concretely they ask UNESCO and it partners to:

It might be worthy to mention that FIAS and AIMS had thrilled privilege to present the report of the working group III - Protection the integrity of sport during the conference.