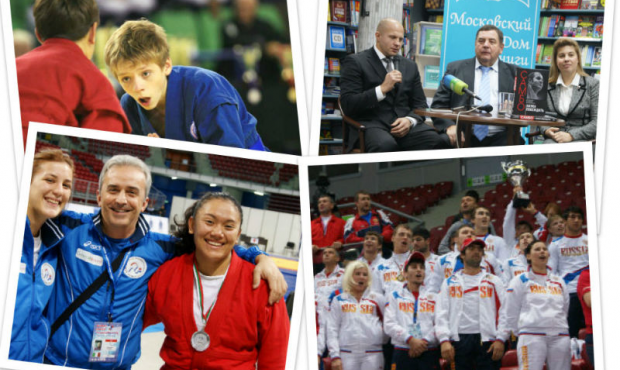 The expiring SAMBO year was full of exciting events, resounding victories, amazing breakthroughs and interesting projects. In our overview we will share with those 12 moments of the year which made us smile, admire or stand motionless in amazement.

It is 2012 when the icon of SAMBO Fedor Emelianenko announced his competitive career ending. His time has come. But Fedor is still with us raised to the rank of Vitaly Mutko, the Counselor of the Minister of Sports of Russia. Besides, now there are even bigger chances to have a talk with Fedor which is proved by the fact that during the World Championship in Minsk the famous fighter was literally given no peace. Today we can watch Fedor out of ring or mat, but in ordinary life, thus getting acquainted with a new him –sociable, open-hearted, reasoning. 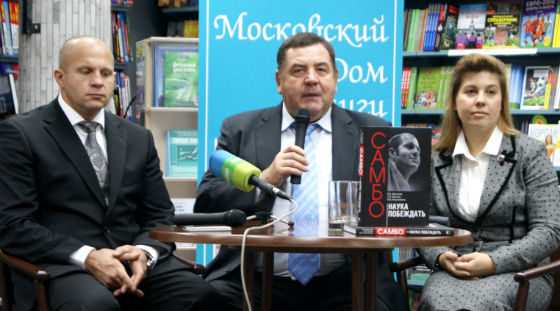 Books are soul food; moreover, and a book on SAMBO is also guidance for life and some kind of a booster for mastering SAMBO at any stage. We are referring here to the book ”SAMBO. The Science of Winning” written by Vasily Shestakov, the FIAS President in collaboration with Fedor Emelianenko and Svetlana Eregina. It is nice to know that the “Last Emperor” has right away taken on such kind of projects after his competitive career ending. However, while commenting on the publication, he told that it is not all that simple:

”I have always been fighting tooth and nails and refusing to have anything to do with writing books. But this time I was pleased to make an exception and accepted an invitation to take part in the creation of this book“, – Emelianenko says.

3. The Breakthrough of the Year

The expiring year can boast a decent number of contenders to that title. The SAMBO wrestlers from Romania and China were the most probable favourites in acquiring the Breakthrough of the Year title. The Romanians were excellent in the World Cup in Bulgaria and successfully performed in the World Cup among students, getting on the podium in both cases. For the Chinese team the Kazan-2012 competitions have become the first major tournament in SAMBO, in which the wrestlers gained success. Silver and Bronze medals on the starting competitions are quite impressive.

However, the garland in the Breakthrough of the Year nomination was gained by the national team of Italy, or rather its fair sex. In keeping with the best Hollywood traditions, the Italians made a name for themselves in the World Cup in Bulgaria, and gained an in-step victory on the near-by mats in the finals of their weight categories. In addition to their golden pair, the Italians got a Bulgarian “Silver”. 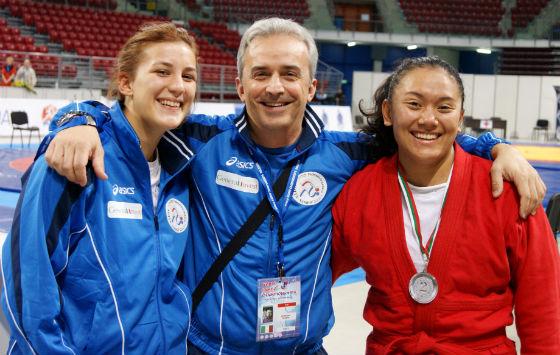 It is not by chance that the Roberto Ferrariz’s team were deemed front runners – they proved that at the highest possible level – the World Championship in Belarus, where Miranda Giambelli won the Silver medal. In Kazan the Italians took the Bronze medal, which was determining for awarding the team with the Breakthrough of the Year title as per totality of all the title podiums.

4. The Romantic Event of the Year

Pretty soon on the New Year’s Eve, the SAMBO world will enjoy the Mendelssohn’s Wedding March. The stars of modern SAMBO Marina Kormiltseva (two-time World Champion) and Mikhail Mokhnatkin (the bronze medalist of the World Championship 2012) will knit together by marriage. 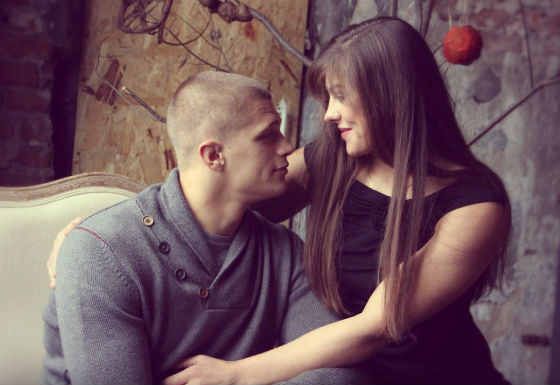 – Misha and I have got acquainted one year ago, in 2011. It may sound banal, but we were riding in one route taxi to the medical examination that we had to pass to go to the Europe Championship in Sofia. Our eyes met…and that’s it, – reminisces Marina. – Conversations in social networks, delight and knowing each other step by step…. We started these frequent voyages from Saint-Petersburg to Perm and back, and, finally, we realized that we are inseparable parts of one united body, created to be together.

It was plain, one morning after the World Championship 2012 (we were still in Minsk), Misha said to me prosily: “Marisha, will you marry me?” – these words turned to be the most important words in my life. As the result, on 26 of December we are going to marry in Saint-Petersburg – the ceremony is going to be very modest, without any flash: only two of us and the coach of Mikhail. And in the nearest future I will move to leave and train to the city on Neva River.

For the first time this year, on the updated FIAS website the SAMBO fans had the opportunity to watch the online broadcasts of the main competitions – World Championship and Cup including the World Championship among students. Valery Stennikov was awarded a special l prize for the best coach’s comment at the end of the fight that became the gold-winning one for his wrestler Marina Kormiltseva. We are happy to bring it to your attention.

6. Hyper-Responsibility of the Year

Belarus, Minsk, hosted the main tournament of the year – the World Championship 2012. The hosts were carefully getting prepared to the competitions both in terms of organizational and sporting aspects. Within the native walls the Belarusian SAMBO wrestlers were going to give a serious fight to their Russian frenemies. However, they did not manage to withstand the responsibility related to performing in front of the home stands. 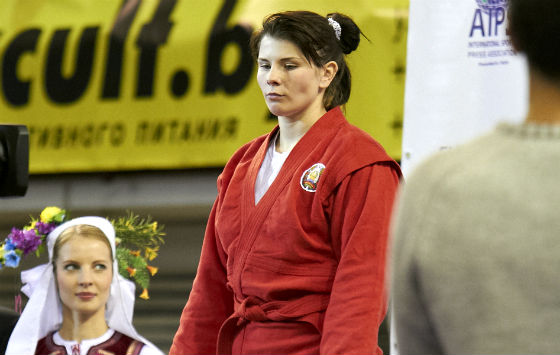 – On the one hand, we cannot bring ourselves to say that our team’s second place in the overall standings is a bad result. However, we wanted quite another fight and different results, – Viacheslav Kot, the main coach of the national team of Belarus told on the competitions’ results. – It is difficult to talk about that now, but deep in our heart we hoped for the first place at home. But something went wrong …

7. Volunteers of the Year

The Kazan World cup among students stuck in the memory of SAMBO wrestlers from 40 countries with sudden snow and frost, excellent arrangement of the tournament including the ubiquitous volunteers with the “Kazan 2013” inscription on their clothes. The trial competition of the Universiade was held on a truly high level; and the numerous volunteers whose responsibilities included making things smooth for the participants of the event, did an excellent job. So, everyone can feel safe and easy when going to the World Games next year.

8. Discovery of the SAMBO Calendar of the Year 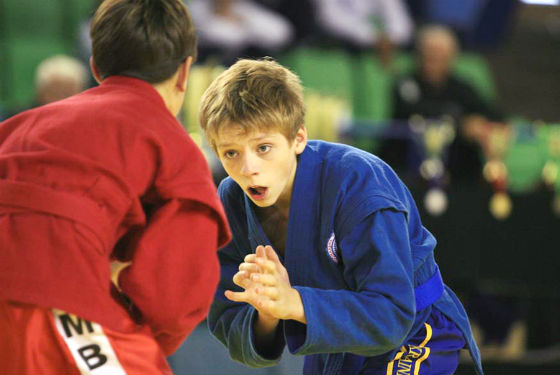 The cadet tournament, the European Cup among youth of 15-16 years of age, became a true discovery and decoration of the SAMBO calendar of the expiring year. For young starlets, their coaches and parents, it was a present, a first continental start in their career. For the audience, SAMBO performed by cadets became a real discovery thanks to that unforgettable passion, emotions and uncompromising attitude that flushed the Estonian Kalev Sports Complex.

9. Respect of the Year

The legendary SAMBO wrestlers, the champions of the first Open European Championship in SAMBO 1972, met in the Russia’s capital in 40 years. Four SAMBO legends visited the ceremony arranged by FIAS. The living champions of those years are truly outstanding people. Sergey Novikov and Vladimir Nevzorov are the Olympic Champions in Judo, Cheslovas Ezerskas is a three-time World Champion in SAMBO, Constantine Gerasimov is the winner of the first World Cup in SAMBO. 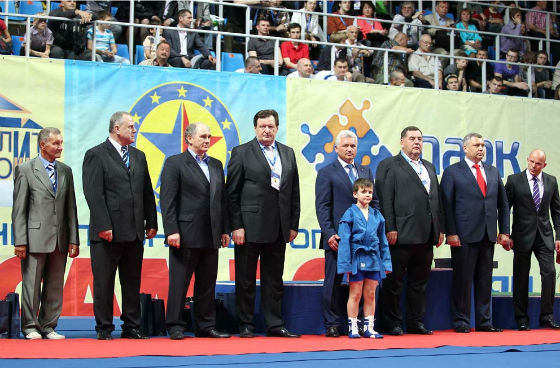 All the warm words and presents are not a maker on that deep feeling of respect, admiration and honor that all the SAMBO wrestlers feel for those people. And the eyes of the children who were adoringly looking at the extraordinary champions in the Moscow Druzhba Hall were the major value of the project.

The World Championship among masters was held in Casablanca, Morocco. Exotics for participants, first performance for the African continent – both were up to the notch. The SAMBO veterans were hot-tempered in fighting, and regardless of the age and health state were setting a good example to the youth. The Championship was a one-breath performance. Moreover, an international seminar with an opportunity to take a serious training was arranged for referees.

11. Creativity of the Year

The SAMBO wrestlers are ready not only to fight in the competitions, but to sometimes show their artistic streaks. At one moment, a Bulgarian sound engineer decided to speed up the process of awarding winners and medalists of the World Cup in Bulgaria, by not completely playing the Champions’ hymn, but the Russians did not agree with such an act. In a single flash the team sang their country’s hymn a cappella directly on the stands. For three times.

Not in such a grand way, but still with a flourish, the representative of the Ukraine performed in the World Cup among students in Kazan. Sergey Gonchuk who won Gold in a tough final fight, danced the victorious gopak right on the mat. The video engineer did his best to snatch a moment:

One can say much on the growth of the SAMBO popularity in the world, but reliable statistics will prove it better than any words. In 2012 there have been set 3 records related to the number of participating countries of the major tournaments. Representatives of 27 national teams came to the World Cup in Bulgaria, SAMBO wrestlers from 55 countries got together in the World Championship in Minsk, and the Kazan World Cup among students became the arena for fights between athletes from 40 countries. So, with the bar raised and the goals set the upcoming year will bring much interesting.