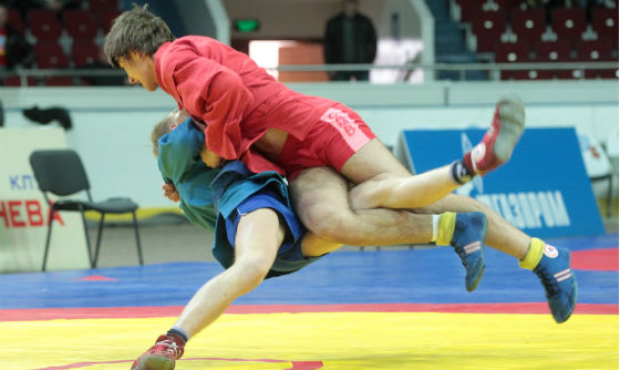 For two days, from 5 to 6 of May in the St. Petersburg Yubileyny Sports Complex (Russia) there was a good deal of bright fighting, flavoured with generous amount of emotions. More than 400 young SAMBO athletes took part in the traditional International SAMBO Tournament “Victory”. The tournament that was held for the 13th time is rightfully considered to be special. The FIAS website found out at least five reasons that allow the “Victory” stand out among other competitions.

A “victory” – is perhaps the most desired word for any athlete. For young SAMBO athletes of the former Soviet Union it attains even more paramount importance in May, when the Tournament with the same name takes place. These competitions are traditionally held on the eve of May 9 – the Victory Day – and are dedicated to the anniversary of the victory in the Great Patriotic War. As a part of this tournament young athletes traditionally met with veterans of the Great Patriotic War and visited memorials and memorial sites in St. Petersburg.

2. Recognition at a high level

For the first time the SAMBO tournament “Victory” was held in 2001 in the city-hero of Moscow. It was attended by Vladimir Putin, the President of the Russian Federation. Further on he always used to send greetings to participants and guests of the competitions at all subsequent competitions, which were held in Tula, Rzhev, Minsk, Volgograd as well as in St. Petersburg.

By the way, St. Petersburg hosts competitions among young fighters for the fourth time in the history of the tournament. This year, the competitions Opening Ceremony was attended by Georgy Poltavchenko, the Governor of St. Petersburg, permanent Chairman of the tournament Organizing Committee, Vasily Shestakov, the International SAMBO Federation President, Boris Rotenberg, Otechestvo Combat Sports Foundation Executive Director, Yury Avdeev, the Minister of Sports of St. Petersburg and Sergey Eliseev, the All-Russian and European SAMBO Federations President.

For his contribution to the organization of the Youth Tournament “Victory” and popularization of SAMBO for many years Vasily Shestakov, the FIAS President presented Georgy Poltavchenko with the special Cup.

7 hero-cities and 11 cities of military glory of 8 federal districts, as well as athletes from other countries – Belarus, the Ukraine, the USA, Latvia and Finland presented their teams in the tournament this year. In addition, for the first time the competitions were attended by students of the St. Petersburg Suvorov Military School, St. Petersburg Nakhimov Naval Academy and the St. Petersburg Suvorov Military School of the Ministry of Internal Affairs of Russia. A total of more than 400 SAMBO athletes came on the fighting mat of the Yubileyny Sports Complex.

Playful fighting, flavoured with generous amount of emotions – is an unmistakable sign of competitions among youth. The devoted support of each other and shoulder to shoulder fighting – is an indicator of team cohesion. Spectators were able to see the combination of all these factors at the tournament “Victory” this year.

– Youth fighting differs from the adult one. It’s always been the case – boys fight emotionally. Some fight for the team much more seriously than in the individual classification, while others – on the contrary – shared his observations Roman Bolotsky, the Russian Youth SAMBO team Coach with reporters.

Well, be that as it may, it is always extremely interesting to watch these competitions. Here one can never predict the outcome. The obvious favourites can go over the top with emotions and lose, one would think, the won duel meet.

However, with regard to this tournament, the Moscow team didn’t allow themselves to slacken and became the main trophy holder for the third time in succession having won the Kerch team (Ukraine) in the Grand Finals. However at the competitions among the Russian Federation federal districts teams the Urals Federal District team bore the bell, and managed to stop the hegemony of the Central Federal District SAMBO athletes. In the Finals the Urals were obviously more result-oriented and won, having showed very spectacular SAMBO.

The traditional May competitions allow young children not only to compete with each other and prepare for further major tournaments. They also become a place for meeting and communicating of young men with the veterans of the Great Patriotic War, who are always present in the stands as honoured guests. Grandfathers and great-grandfathers of young SAMBO athletes fought on the battlefields for a great victory, for today their grandchildren and great-grandchildren can gather at major sports events and compete for trophies of another – peaceful “Victory”.