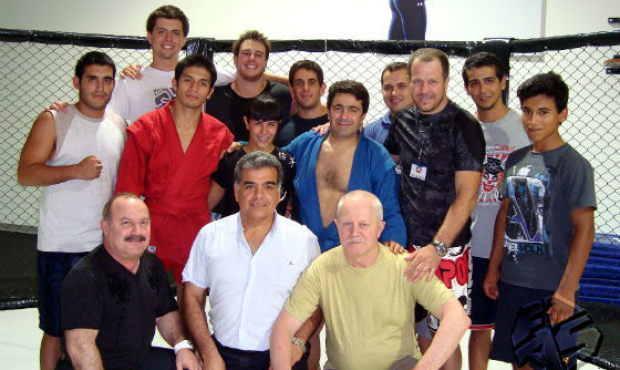 The third largest country of Southern America. Down to the middle of the XVI century its territory was the center of the Inca Empire. Then the country became a part of the Spanish colonial possessions. Today, the majority of the population speaks Spanish. The capital of the state is its largest city – Lima. We have enumerated some facts of common knowledge about Peru to you. Now it’s the time to learn the facts that are not so obvious, but therefore even more exciting. Read right now about why the Peruvians are actively run into SAMBO, who assists in the development of the combat sport at the highest level, and how many athletes will represent the country at the upcoming Pan-American SAMBO Championship.

In the middle of spring in the state’s capital, the city of Lima, SAMBO seminar under the auspices of FIAS was held. More than 40 athletes representing different kinds of combat sports, took part in the event, organised by the International SAMBO Federation jointly with the Peruvian SAMBO Federation. The FIAS Development Department Coach Tigran Karganyan, who guided the seminar, not only taught athletes different SAMBO nuances, but also told them about the history and philosophy of our favorite combat sports.

As a result, the bundle of knowledge and skills of the event’s participants enlarged greatly. They learned about the history of SAMBO development, trained the spotting and the first technical actions in the position and on the ground as well as learned safety standards for the organisation of the first fights. In addition, Tigran Karganyan shared techniques of organising training sessions and trainings, and dedicated them to judging in particular, with athletes and coaches who attended the seminar, having considered the nuances of the competitions rules. During the week the Peruvian SAMBO fans studied the theory and practice of the combat sport, to apply the knowledge and skills gained, at trainings and competitions in future.

In addition to the athletes and coaches training, the FIAS representative Tigran Karganyan conducted a series of meetings with official personalities of various social and sports organisations. The agreement on the SAMBO promotion and development in Peru was reached with the President of the National Olympic Committee Jose Kinones. And together with the President of the National SAMBO Federation Carlos Manzanares Marcos the FIAS representative Tigran Karganyan discussed joint efforts to promote the combat sport in Peru. The representatives of the Russian Embassy in Peru also declared their support for SAMBO development. As Director of the Russian Scientific and Cultural Center in Peru Mikhail Osipov pointed out, “We will do our best to support our sport in Peru”.

Fact 3. SAMBO receives much attention from the media in Peru

Despite the ubiquity of the Internet, television still plays an important role in everyone’s life. It is by means of television, many still get news, learn about new developments, receive different information. That’s why people on the other side of the blue screen select the characters and plots for their broadcasts very carefully. It is pleasant to mention that one of the leading television channels – the national TV channel RBC TELEVICION CANAL 11 prepared a program about SAMBO and organised a demonstration of spectacular holds of this combat sport.

Fact 4. They go in for SAMBO in sports clubs in Peru

After the FIAS Development Department Coach Tigran Karganyan carried out lively educational and training sessions in sports clubs in Peru, the number of athletes wishing to engage in SAMBO, increased significantly. It means that soon such sports clubs as the Academia Marcial Arts – Fight Center, Professional FIGHTERS, Club Union Arabe Palestino, VIDENA – Centro Nacional de Alto Rendimiento (the Olympic Training Center) and the BLACK DRAGONS may become the places that will go down in history as clubs, first began to cultivate SAMBO in Peru.

Fact 5. The Peruvian SAMBO athletes are preparing to perform at the Pan-American Championship

In a month in Panama the Pan-American SAMBO Championship starts. Athletes from different countries will come together to show their skills and test their own abilities in face-to-face duel meets with rivals from other states. Those Peruvian SAMBO athletes who passed the preliminary evaluations during the trainings, organised by FIAS jointly with the Peruvian SAMBO Federation, will represent their country at this continental tournament. The lucky ones who are actively practicing today and get ready for the Championship are: Carlos Zegarra, Johnny Chavez Aliaga and Valeria Mejia.

Fact 6. There is kindly soil for SAMBO in Peru

“Mixed styles bouts are very popular in Peru, moreover for different levels of training. I think that soon SAMBO will become popular due to this fact, – Tigran Karganyan shares his own opinion. – During the meetings with the National Judo Federation representatives it became apparent that due to new changes in the judo competitions rules (total ban of legs grips), many run into related disciplines. There is already a group of judoists who are ready to run into SAMBO”.

Taking into account the possibilities SAMBO offers and how it is popular among athletes who are familiar with mixed combat sports, the potential for the development of our favorite combat sport in Peru is just huge.

Fact 7. They evaluated SAMBO applied meaning on its merits in Peru

The Peruvian police and army units got a new kind of weapon – for some time here they have been learning self-defense without weapons. The trainings held with great success in local defense and law enforcement agencies, are conducted by Combat SAMBO Instructor from Russia Andrey Trushko. It is under his aware guidance officers and soldiers work out the skills of defense and detention. If you recall the SAMBO history, it was initially created for this applied purpose in particular. And only then it became the favorite sport of many. Therefore it is possible that the Peruvian security forces, having learned SAMBO holds in the police or army, will want to run into professional sports in future and try their hand in the international arena.