7 important reasons why we look forward to A. Kharlampiev Memorial World Cup 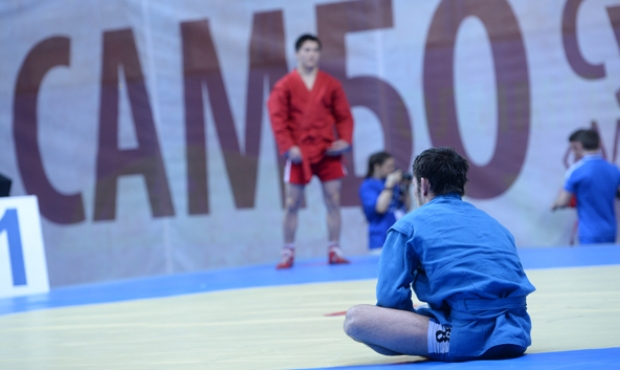 This tournament needs no special presentation. Every year it constantly attracts a lot of participants and even more fans. In sambo it is unofficially called “World Super Cup” and “The Second World Championship”. This year A. Kharlampiev Memorial World Cup will be held in the Druzhba Multipurpose Arena of the Luzhniki Olympic Complex in Moscow on March 27–29. The FIAS website shows at least 7 reasons why all sambo lovers eagerly wait for the beginning of this tournament.

The First Reason. Status of the Official and Unified World Cup

“A. Kharlampiev Memorial World Cup is one of the most important international sports events. It gains attention of the spectators from different countries. For the first time, the competitions will be held as official Unified World Cup this year,” said the President of the European and All-Russian Sambo Federation Sergey Eliseev. “Formerly, the World Cup consisted of four stages, but we studied the situation and found that the most sambo athletes had participated in the tournament in Moscow in the previous years”. 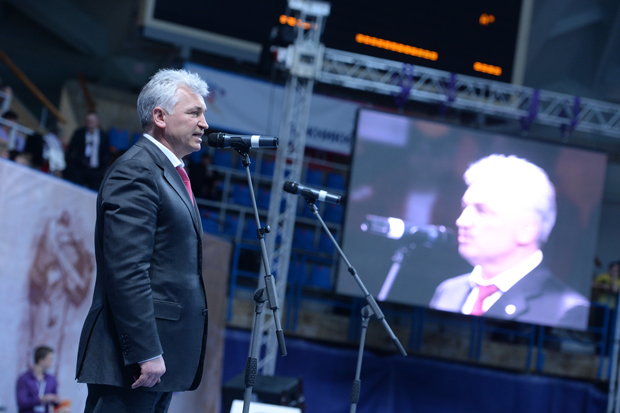 Thus, if one year ago it was only possible to become a winner or one of runners-up of the Sambo World Cup based on the amount of performances on four stages, now the selection of the Cup holders will be carried out within three days in Moscow at A. Kharlampiev Memorial.”

The Second Reason. Dedication to the 70th Anniversary of the Victory

In 2015, the 70th anniversary of Victory in the Great Patriotic War is celebrated. The oldest and the most prestigious sambo tournament will be dedicated to it. According to the press service of the AllRussian Sambo Federation, this particular important date will become the basic motive of the bright and memorable program of the tournament opening, which is prepared by the trainees of the legendary school “Sambo-70”. Veterans, representatives of the law enforcement agencies and students of Cadet Corps will be invited to the competitions.

The Third Reason. Online Broadcasting of the Tournament 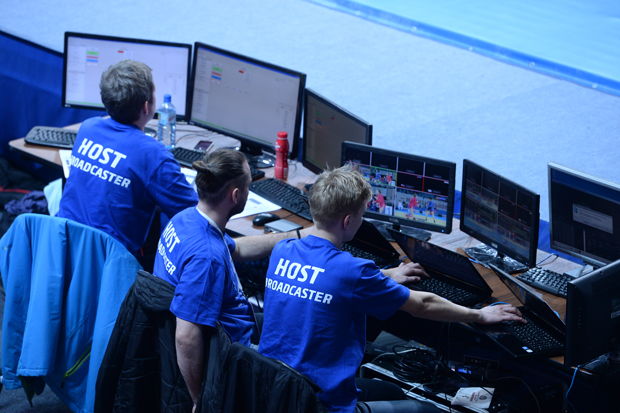 You can watch bright memorable duels of the tournament not only in the Druzhba Multipurpose Arena of the Luzhniki Olympic Complex, but from around the world if there is Internet access. The FIAS website organizes live and the most complete broadcasting of A. Kharlampiev Memorial World Cup. You can find the preliminary duels from all three mats, as well as the finals of all three days in all 27 weight classes: 9 — men, 9 — women and 9 — combat sambo.

The Forth Reason. World Cup is in the Shape of… Matryoshka Doll

In 2015, the winners and runners-up of the World Cup will be the holders of exclusive prizes. Unique cups will be made in the shape of… the Russian Matryoshka doll. So at A. Kharlampiev Memorial the best of the best will receive the following “souvenirs”: 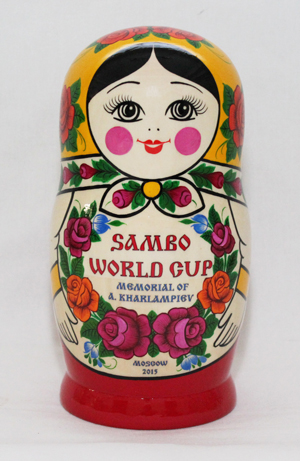 In 2015, all international sambo competitions are held according to the renewed rules, which were introduced by FIAS as experiment since January 2015. So someone easily adapted them, and someone has difficulties with this. In order to let referees prepare and properly work at A. Kharlampiev Memorial World Cup the international workshop for referees starts on March 24 in Moscow. More than 50 best referees from 18 countries will examine the details of the new sambo rules, and after that they can be attested. 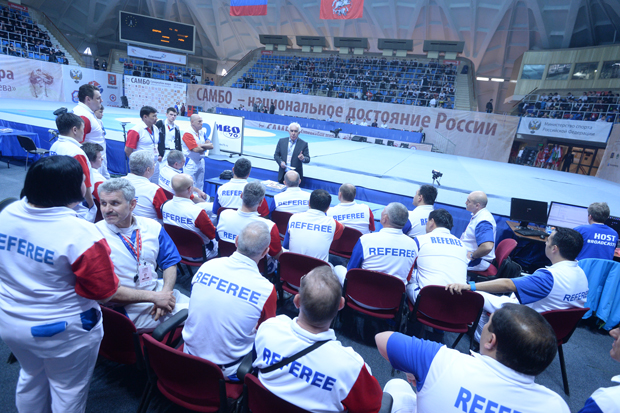 “The referees get a little confused about the new rules yet, because there has been no workshop yet, and the perception of many of them has not changed. We will eliminate these gaps, giving them current information,” said internationally certified referee Boris Sova, one of the responsible for the holding workshop, to the FIAS website prior to the workshop.

The representatives of at least eight Teams won’t hurry home after the tournament. The next day after the competitions the teams of Germany, Georgia, Kirgizia, USA, France, Belarus, Kazakhstan and, of course, Russia will go to the International training camp. It will be organized on the basis of the school “Sambo-70” and will allow sambo athletes from different countries to spar and share the best practices during joint training sessions. 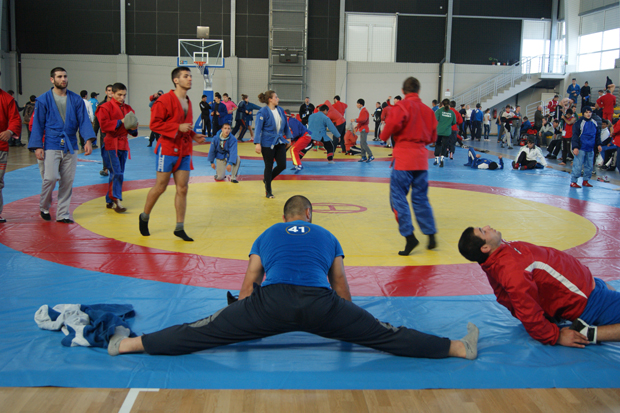 For the first time ever the international training camp was organized after the World Cup in Almaty this year. About 80 athletes from Belarus, Kirgizia and Kazakhstan trained there. According to the senior coach of Kazakhstan Team Kairat Turaruly, the good of this kind of joint training sessions is obvious.

“We conducted training sessions in the morning and in the evening, where Kazakh athletes tried to work out the mat wrestling — the element which is not well developed. Usually at sambo competitions there are not so many opportunities to wrestle with each other, so these training camps after tournaments are a great opportunity to adopt experience of each other,” said Kairat Turaruly.

The traditional laying of flowers in front of the monument of Anatoly Arkadyevich Kharlampiev will be made on the opening day of the World Cup. Tournament in his name is the tribute to the memory of one of the founders of sambo. 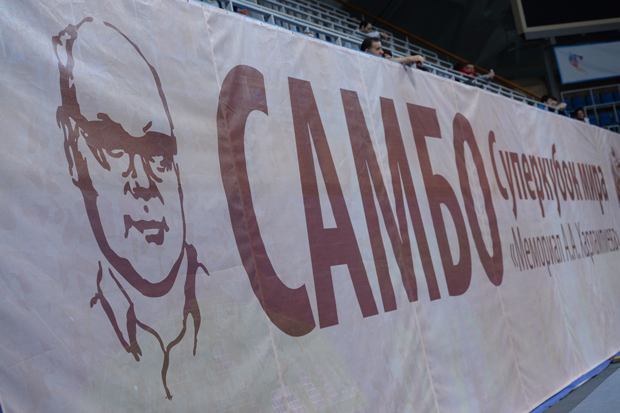 Anatoly Kharlampiev continuously studied diverse national wrestle systems of the peoples of the USSR. Based on the results of hard work, in 1938 he stated the scientific basis of the sport wrestling and self-defense system, and later, in 1946, it was given a name of sambo. Kharlampiev made considerable efforts in generation, development and improvement of sambo, which in 1966 resulted in the recognition of this wrestle as international sport. He founded the school of athletes’ upbringing in the sport societies, such as: Krylia Sovetov, Dynamo and Moscow Power Engineering Institute, cultivated more than one hundred masters of sport, candidates master of sport and thousands of athletes with sport categories.