9 months before the start of the 2014 World SAMBO Championship: as we speak a little bit about how it will be 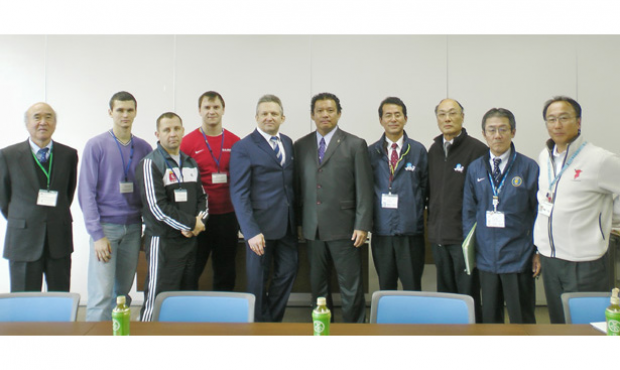 In this report you can learn about weather conditions, as well as other conditions with which Japan will meet SAMBO athletes in November, and about mascot of the host city of the 2014 World SAMBO Championship. Also we will tell you what the Mayor of Narita will wear for the official Opening Ceremony of the main start of SAMBO season and exactly what kind of a competition arena is waiting for SAMBO athletes this year.

So the FIAS delegation, which will work in Japan for a few days in the framework of the Sino-Russian exchanges, made a landing at the Narita airport today. The International SAMBO Federation team is Sergey Tabakov, FIAS Executive Director, Vasily Ugolnikov, Maxim Kornienko and Artem Drokov – three members of the judicial manpower who will conduct judicial seminars for their colleagues from Japan these days, and your humble narrator – Natalia Yukhareva, FIAS Press Attache.

Narita is a small city in the Japanese Chiba Prefecture with population of 127 thousand citizens. For tourists Narita is not only the airport, where the majority of travelers who want to visit the country of the Rising Sun land, but also an interesting city from cultural point of view, with lots of Buddhist temples and museums. However, the FIAS delegation is interested in their own culture – SAMBO, and therefore under the leadership of Nobuyuki Asai, Vice-President of the Japanese SAMBO Federation, the FIAS member, who met us at the airport, we go to Narita sports and entertainment park. That’s where the 2014 World SAMBO Championship is planned to take place.

A bright mascot of the city meets us, which is, as it turned out, everywhere here: in cute figures which children don’t leave, as well as on T-shirts and souvenirs. We think this mascot will definitely be in design elements of the World Championship in November. Therefore, meet: a sweet creature of white and blue, a kind of an aircraft and eel hybrid. “Eel”- because it’s the city where eel is produced very successfully, and aircraft - of course, because Narita is one of the main air transportation hubs in the country, so it is also called as the “gates” of Japan. 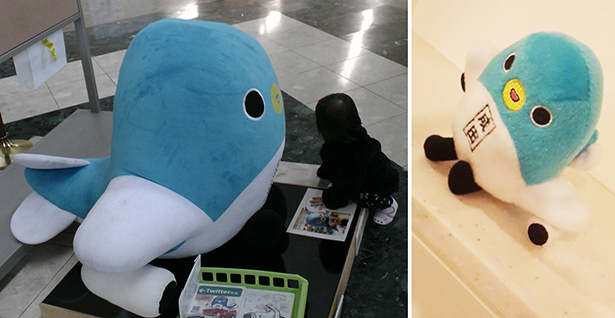 The competition arena for 1500 spectators, convenient infrastructure, numerous comfortable hotels close to the gym, several gyms that can be used as warm-up ones, and most importantly, what Nobuyuki Asai joked about: “There is a great football field nearby, so I had already booked it for the end of November. I know that Vladimir Yaprintsev, a member of the FIAS Executive Committee, the President of the Belarusian SAMBO Federation, likes to make a good team of SAMBO athletes and kick a football, as it was on the eve of the World Championship in Minsk in 2012”.

Football isn’t the main thing, and all discussions were revolved, of course, around SAMBO, and all the questions of Sergey Tabakov addressed to the sports complex team were exactly about SAMBO. The discussion, as always, concerned the whole range of issues: a locker room, marching on the mat, stand for judges, a place for accreditation, and at the same time – where it is more convenient for judges and journalists to work, what utility rooms and constructions are available, and what should be taken on lease or created. As a result, all the smallest details were recorded, marked, and on the basis of assumptions of the audience: no one doubted in “We will make a beautiful and bright Championship”. It’s also black and white that the weather will contribute to this – in November in Narita air is heated to an average of 18-20 degrees Celsius above zero.

Visiting the local city hall is coming up next in the agenda. Head of Narita, Mr. Kazunari Kadzuri live in the emotions and easy in movements, noticed: “This year we celebrate the anniversary – exactly 60 years ago our city was founded, it’s great that we will meet such a great celebration of sports in the anniversary year. We’re ready to work arm-in-arm with the International SAMBO Federation and the Japanese SAMBO Federation and hope that we will succeed”.

This event is also an additional bridge, which connects the Japanese and Russian peoples, and this is diplomacy in action already. In response to the gifts presented by Sergey Tabakov, the Mayor, unwrapping the box with the FIAS branded tie said with a smile: “That’s what I‘ll wear for the official Opening Ceremony of the World SAMBO Championship”. In conclusion, we recalled the Winter Olympic Games in Sochi starting tomorrow, ready at hand we couldn’t ignore the Tokyo Games in 2020 and, of course, also mentioned SAMBO Olympic ambitions. The Mayor noticed: “I know that the International SAMBO Federation is working on this a lot, and I, on my part, wish you a speedy implementation of the Olympic dream: SAMBO is a very beautiful sport”.

The day ended with a gala night, which was attended by distinguished guests – Mr. Masaaki Kondo, the President of the Japanese SAMBO Federation, Mr. Tomiaki Fukuda, the President of the Japanese Wrestling Federation, Vice-President of the FILA, Vice-President of the Olympic Committee of Japan, Mr. Masaki Ishikawa, Director of the Sino-Russian exchange programs of the Ministry of Foreign Affairs of Japan, and many other representatives of sport, business and culture. Welcome speeches, warm words associated with the development of SAMBO in Japan and friendship among Wrestling, SAMBO and Judo Federations of the country, which helps and enriches. And, of course, all the participants noted that looking forward to carrying out of the II Russian President’s SAMBO Cup, which starts in the capital of Japan this Sunday, on February 9.

Read about it in our next reports very soon – now from Tokyo.