Aleksey Lebedev: Thanks to renewed rules there are more emotions 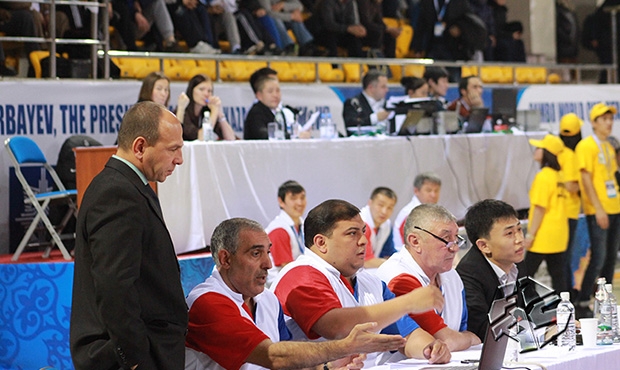 Sambo World Cup stage in Kazakhstan became not only the first international tournament in FIAS schedule for 2015, but the first large-scale competition, which was held according to the renewed sambo rules. The Chief Arbiter of the tournament was an internationally certified sambo arbiter of extra-class Aleksey Lebedev. Especially for FIAS web-site he shared his opinion about the level of the tournament staging, about changes in the rules and the perspectives of these innovations.

“The brightest and the most evident change was reduction of number of points up to clear victory — they were reduced from 12 to 8. The tournament showed that this innovation added dynamism, fleeting nature and spectacularity to the scrummages. The renewed rules caused the appearance of more emotions. A sportsman makes two actions and wins prematurely — as a result he is glad, the spectators cheer, emotions go wild. When a person wins prematurely, he is always pleased. Consequently, the loser also has emotions, but they are different,” says Aleksey Lebedev.

The Chief Arbiter of the competitions told about the way of arbiters’ training, and about the work that was carried out with the representatives of the teams.

“In Kazakhstan, the seminar for arbiters was held before the competition, which helped the arbiters to readjust to a new way, considering the amendments that were made. There was also a meeting held with representatives of the teams. They were told about all changes to avoid any misunderstandings or conflicts in connection with the scores from the arbiters,” shares his thoughts Aleksey Lebedev.

However, the discussions of innovations were continuing throughout the tournament.

“Of course, all new things always cause lively discussions and trigger emotions, the changes in sambo rules were not the exceptions. Throws from the knees caused a lot of talks. Changes in the rules take away particular set of techniques. Some sportsmen construct their training to sharpen these actions. For decades sportsmen practiced the throws that handed them victories. They do it at the competitions automatically, they perform throws but the situation is not assessed,” says the Chief Arbiter of the tournament in Kazakhstan.

“Not only sportsmen had to rearrange, but also the arbiters. In general, the arbiters met the challenge,” states Aleksey Lebedev.

“After the rules changes, the arbiters had theoretical training, and then practical startup was held. I cannot say that everything went smoothly: there were imperfections that require adjustments and improvements. However, if there were any mistakes, they were inevitable, because we needed some time to readjust. Maybe today some aspect of innovation went smoothly, and at the next tournament it would attract more attention. Everybody would look at something that today caused difficulties in 10 competitions and say: well, yes, we should leave as it is. We need six months or a year to evaluate all changes in practice,” believes Aleksey Lebedev.

The internationally certified arbiter of extra-class is not in a hurry with forecasts for renewed sambo rules.

Aleksey Lebedev says, “We can say something in concrete terms only after competitions and obtaining specific statistics. It is hard to estimate any change based on one tournament. As for the general impression, starting competitions of this year run successfully. It is reflected in the number of countries and sportsmen who participated in the tournament. Over 300 wrestlers from 21 countries — from Europe, Asia and America — came to the carpet to fight. Many participants of the World Cup in Kazakhstan are known for their performances in the continental tournaments and world championships, consequently, wrestle class and spectacularity were at rather high level. It was also pleasant that the grandstands were filled — interest in wrestling in Kazakhstan always was great and it still remains so. It can be noted that spectators really understand sambo, they cheered actively. Of course, the organizers made every effort to render attention to all participants of the competition and make them fill comfortably.”

There are new starts and new challenges for sambo athletes and arbiters in the future. In March, the judiciary establishment expects an important educational event, which not only helps to know all innovations in sambo rules better, but also to obtain a license to work at the largest competitions of the season, the main one is the World Championship.

“The main seminar for arbiters is planned in Moscow at the World Cup — two days before the start of Kharlampiev Memorial Competition. According to the results of the seminar, the arbiters will be issued the licenses for further work at the international level and, in particular, allowances to the future World Championship. It is worth explaining that the arbiters, who obtained the licenses at Cyprus seminar last year, can work at all competitions of the current year up to the World Championship. It is necessary to obtain a license in March to work at the main start of the season and further tournaments,” looks into the future Aleksey Lebedev.