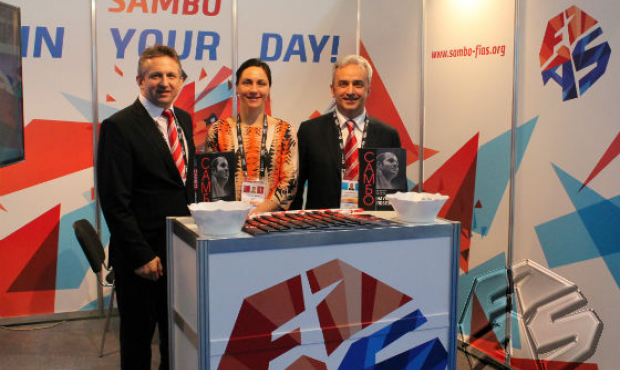 The Convention – is a unique opportunity to come together to establish business relationship, impart knowledge and develop, and in future to implement ideas that will give impetus to the promotion and development of various sports as well as sports marketing and television.

The exhibition ongoing these days helps to establish this relationship faster and so to say, “show the goods to the best advantage”, it includes displays of numerous federations and sports organizations. This year for the first time in history SAMBO presents itself at such a high level. Decorated in the colors of the new corporate FIAS identity, bright and catchy SAMBO “nook” is very popular with visitors and the Convention participants. During the chocolates degustation wrapped in the colors of SAMBO, by guests, the FIAS representatives is telling them about our combat sport, prospects for the development of SAMBO in the world, as well as have time to exchange business cards and discuss the prospects for future cooperation during the conversation.

A significant highlight of the event will be the election of the SportAccord President. Among the applicants for a position of Head of this organization – Marius Vizer ,the President of the International Judo Federation and Bernard Lapasse, the President of the International Union of Rugby. Today in the Lenexpo both applicants made presentations – pre-election programs. Marios Vizer indicated in his speech that all those best practices that currently the Judo Federation have, he will carry into his job as SportAccord Head. Let’s recall that the major reforms in judo have been associated with innovations in the sporting calendar, changes in the rules of the competitions and the introduction of modern technologies in the organization of the judo competitions. Vizer’s innovative idea of the possibility of carrying out a single World Championship in all sports every 4 years is also interesting.

In his turn, Bernard Lapasse announced that SportAccord will hold on the previously selected course under his presidency, developing and enhancing all the tried-and-tested by the organization before. He also suggested that under his leadership those sports that are not included in the program of the multisport games will certainly find their “niche” in the framework of new SportAccord multi-sport events.

Let’s recall that the elections of SportAccord Head will be held on the final day of the Convention – namely, on May 31. Just the same day on our website you will be able to learn the name of the newly elected President of SportAccord.

In the meantime there are conferences, presentations and meetings one after another in the Lenexpo. FIAS Acting Secretary General, Roberto Ferraris, the President of the Italian SAMBO Federation told us on the report of Espen Lund, the SportAccord Board member at one of today’s meeting. He said: “Today Espen has announced a very interesting idea of the assistance that the SportAccord may render, in particular, to the national federations that are members of international federations – the SportAccord members. Knowing the specifics of the arrangement of the sports management process in different countries and having relations to the local Olympic Committee and the Ministry of Sport, SportAccord can serve as a guide for national federations, can help us to solve many difficult organizational issues. It would be a great help for us – that’s what we need now”.