Benefit evening dedicated to the 75th anniversary of SAMBO in London 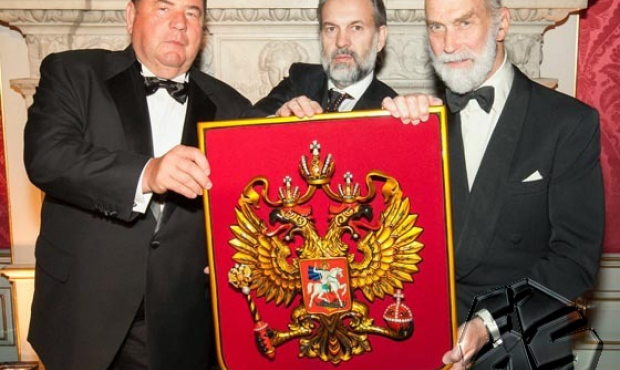 A gala night dedicated to the celebration of the 75th anniversary of SAMBO and promotion of the sport in the global Olympic family was held yesterday at Kensington Palace in London (UK). This unique event was carried out under the patronage of the President of the Russian Federation Vladimir Putin and His Highness Prince Michael of Kent.

Prince Michael of Kent, members of the British Royal Family, Vasily Shestakov the President of the International SAMBO Federation (FIAS) and Deputy of State Duma of Russian Federation, Lord Simon Reading President of SAMBO Association of the British Commonwealth, Alexander Yakovenko Russian Ambassador to the UK, Sergey Aleynik Belarusian Ambassador to the UK, famous athletes, workers of culture and entrepreneurs took part in this event.

The event with a solemn name “Benefit evening dedicated to the 75th anniversary of SAMBO” started in London at 19:00 GMT. After Marshal hit the baton as many times as many guests arrived at the Hall of the Kensington Palace, a greeting from President of Russia Vladimir Putin was read off: “Dear friends, I am glad to welcome you at the party at Kensington Palace and thank you for the attention you pay to SAMBO promotion in the world as a would-be Olympic sport in the future”.

Then, the hour had struck for all the guests of the evening to contemplate SAMBO in action. A unique show called “SAMBO” was demonstrated by FIAS group to peers, lords, Russian and British public and political figures. It is noteworthy that the performing athletes – Masters of Sports in SAMBO Ivan Morozov and Alexander Perepelyuk – showed a bright and spectacular spot in dinner-jackets on the lawn outside the Palace. The dinner-jackets were cut by special order in Russia: the main requirement for them – was exceptional durability, so that the suits seams were able to withstand the wonders of self-defense technique without weapons. On their sincere question “Why are they without sport uniforms?” the participants formulated a convincing answer for themselves soon: “Technique – either it is, or it isn’t”.

After SAMBO show all the present at the Palace were able to see the social significance of SAMBO. It is one of the social projects of the International SAMBO Federation – “How to fall correctly” – about which a short film was demonstrated for all who were present at the event. The essence of this unique FIAS program, popular in many countries around the world – is to educate people of all ages the ability to fall correctly, using SAMBO techniques, which is necessary both in the household, and in emergency situations of everyday life for all people – young and old.

“Next, 2014, is declared to be the cross-year of British and Russian culture, – said Vasily Shestakov. – Sports and SAMBO, in particular, is a competent part of the cultural heritage. We look forward to inclusion of SAMBO projects in the cultural program, which will be held in the framework of this cross-year. And by the way, now there is a tentative agreement and consent of Vladimir Putin to carry out SAMBO Championship for the prizes of the President of the Russian Federation in London next year”.

The President of the International SAMBO Federation comments on the past event as follows: “This evening brought together many people who appreciate and recognize the uniqueness of SAMBO as a part of not only Russian national and cultural heritage, but also a part of the world culture. For us this evening – is one more step towards the fulfillment of the International SAMBO Federation mission. It is both simple and complex: we strive to ensure that, when on any continent the word “SAMBO” is pronounced, everybody would associate it with the word “Russia”. And, of course, we want SAMBO to become already the Olympic one by that time, our sport deserves it”.

The evening that took place in the UK started a series of similar events that would be held around the world in the near future. The next is expected in Kazan (Russia) during the World Summer Universiade in July. And the final of the events of this kind will be a welcome reception, which will bring together SAMBO fans in St. Petersburg (Russia) in November, during the World SAMBO Championship in the northern capital.