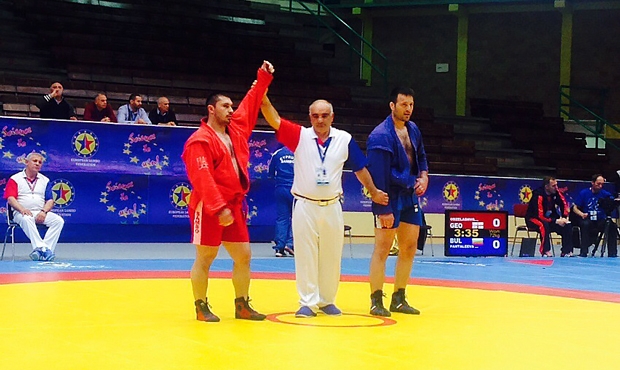 Today, on May 15, in Zagreb’s sports hall Sutinska vrela the European Sambo Championship has kicked off. The main start of the year for the European sambists has gathered about 300 athletes from 28 countries of the Old World. We would like to share with you the names of the bronze medalists of the first competition day of the tournament, as well as the comments of athletes and coaches who will rise to the third step of the podium in Zagreb tonight.

In the first combat Russian Nemkov unexpectedly lost to Anatoly Volschyanov from Ukraine who will compete in tonight’s finals. "Victor was weak the entire meeting, missed a hit on the head and found himself in a knockdown as a result. I think the excitement of the first battle got the better of him and he also didn’t warm up well enough. In the duel for the third place Victor performed better: a throw for 4 points across the head with a shin lock and a few reprimands for passivity. The result was a well-deserved victory in the struggle for bronze against Atanas Dzhabasov from Bulgaria. Of course he wanted to participate in the finals but it is sambo, and more importantly, combat sambo: you relax a little, miss a hit and lose everything," – commented on the first bronze in combat sambo for Russian wrestlers the senior coach of the Russian national team Alexander Konakov.

Halus Roxana Simona, Romania, bronze in the weight category up to 48 kg:

"For me it's a step forward. Last year in the European Championship in Bucharest, my homeland, I was only fifth, stopping just a step away from the medals. Today is a great day for me! I am happy to be with a medal, and it is a huge success for me. Perhaps I will take part in the European Games in Baku in the weight category up to 52 kg. We have two contenders for this place in the team, we both train very hard and soon the coaches will decide who will go. This competition is a huge challenge for the athlete demanding all their forces, physical as well as emotional, and we are preparing very hard."

Valentin Jourdain (France), a sensational bronze in weight category up to 90 kg

The Frenchman has won against the strongest wrestler from Ukraine Valentin Grekov who by the way is a three-time European champion and world championship medalist in judo. Jourdain was losing the entire meeting with a score of 6:0 but 20 seconds before the end of the match he made a throw and took the Ukrainian on hold that brought him victory. Grekov gave up and the bronze went to France. "I know him well, he's a strong fighter, but I’m younger, he’s almost 40 years old. My functional training has helped me. I believed in myself, went ahead and eventually won. It makes me very happy because at last year's championship I lost to Kabelashvili from Georgia in the starting fight, and today I have a medal. Now I will prepare for the World Cup in Casablanca."

Bronze winners of the first day of the European Championship 2015
May 15, Zagreb (Croatia)

[Photogallery] European Sambo Championship — Day 1. Morning
Share
Blog
Recent photos
Latest news
Recent videos
Latest news
Follow latest news You are subscribed!
Thank you! Your confirmation email has been sent to your email.
This website uses cookies to ensure you get the best experience on our website More info Got it!