European Sambo Championship in Zagreb: emotions and impressions of champions and winners of the first day of the tournament 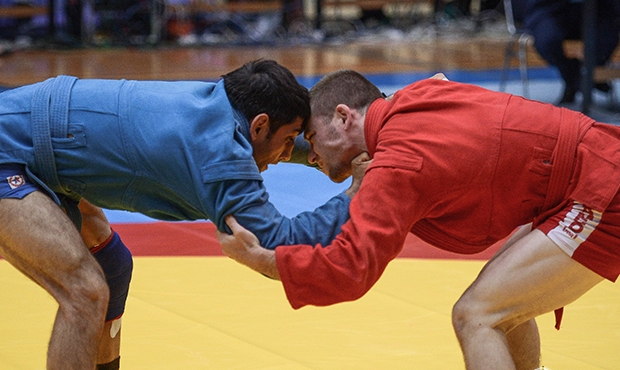 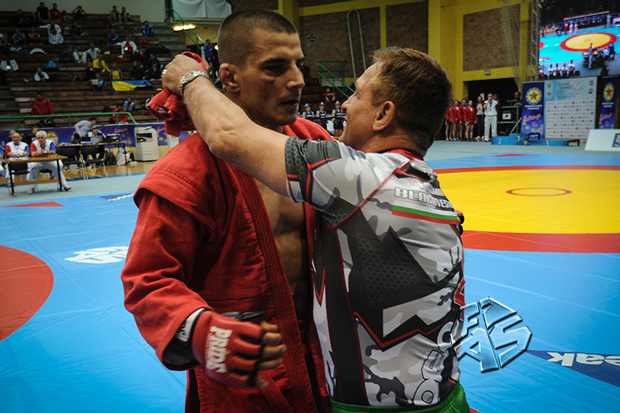 Tihomir Blagovestov (Bulgaria, 1st place, 74 kg combat sambo): man-faith
He symbolizes faith in himself because he was losing with a score of 7:1 and eventually won with a score of 11:7, receiving 3 points for penalty of the opponent, Andrey Kalinin from Russia, and then conducting a series of throws and a hold. "The task was to fight and not to deviate from the wrestling tactics without hitting. Tihomir did the right thing and in the end got a well-deserved gold," -- commented on the victory of his compatriot Ivan Netov, the chief judge of the competition. 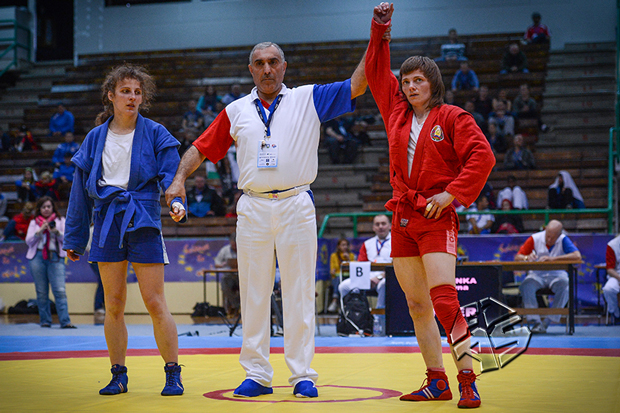 Katerina Prokopenko (Belarus, 1st place, 60 kg), the fifth title of the champion of Europe
"Of course I don’t feel the same emotions I felt when I won the European championship for the first time, but it is not easy to defend the title, the leader is always perceived in a different way, especially since last year I didn’t win. Today's victory has been very hard for me, it is the fourth big start in the season and the fatigue accumulates. Now I plan to get some rest and start preparing for the European Games in Baku, the main start of the year. I haven’t yet started thinking about the World Championship in Casablanca." 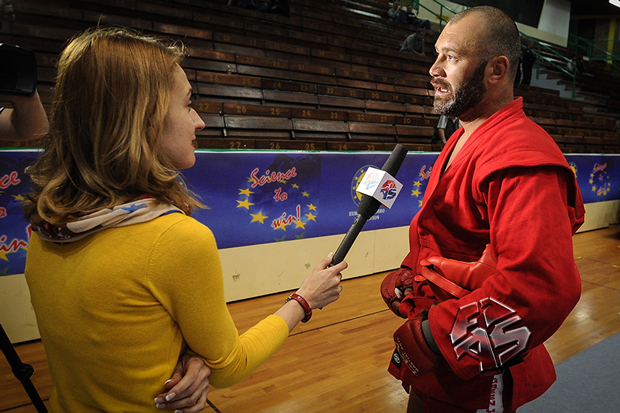 Volosyanov Anatoliy (Ukraine, 1st place, combat sambo 100 kg): man-analyst
"I am 35 years old, by the sports standards I’m not young, and because of my age I can’t do a huge amount of work. So I have a different plan of action, winning through a thorough analytical work and tactical thinking, reviewing the records of fights of my rivals, analyzing, drawing up a specific plan for each fight. This is how I won today, at the start, against the powerful Russian Victor Nemkov, and in the final, against a Hungarian. Initially, I was engaged in combat sambo, but I also teach physical training for the security forces, which is why I was forced to restructure my teaching to more of a striking technique, and then I also changed my competitive activity to combat sambo. Today's gold made me very happy, the next step will be the World Championship in Casablanca." 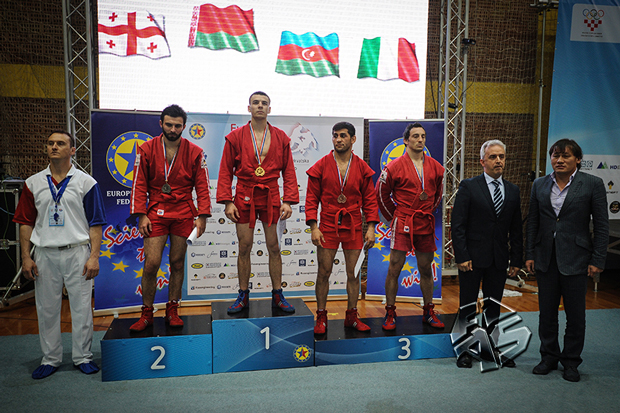 Mattia Galbiatti (Italy, 3rd place, sports sambo 68 kg): the hope of Italy
"This is a great success for the Italian national team and a great result for Mattia himself. In 2011 at the European Championship in our native Crema he was only fifth, and today’s start is a step forward for him. If all goes well and we’ll be able to avoid injuries, I think Mattia may qualify for a world championship’s medal in Casablanca", - commented on the victory of his ward in weight category of 68 kg the Italian national team mentor, Secretary General of the Italian Federation of Sambo Roberto Ferraris. 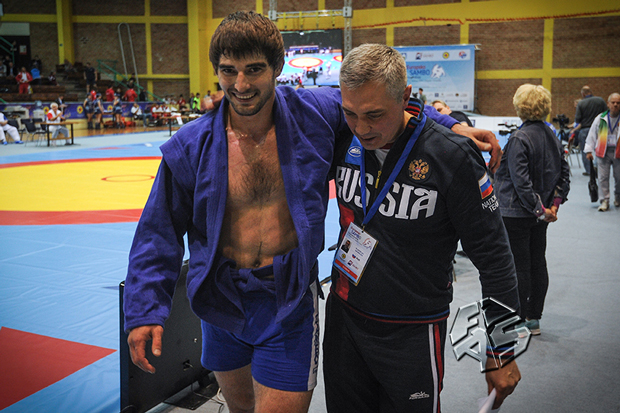 Arsen Khandzhyan (Russia, 1st place, sports sambo 90 kg): the best technique of the day
Arsen is the world champion and two-time European champion. In the main fight of the day he confidently defeated the strongest wrestler of Belarus Andrey Kazusenok. Khandzhyan showed phenomenal beauty and stunning performance of the technique, even more fascinating because its arsenal of movements was quite rare for sambo: a series of sweeps and a reverse throw across the back. "My technique is the merit of George Grigoryan, my personal and only coach, who since my childhood made me work on the sweeps. The result you have seen today, I am pleased that the fight turned out well. In the Russian championship I was second and lost to Arsen Chernoskulov, this is why I’m here, and this is the main start of the year for me, now I will begin preparing for the Championship of Russia-2016." 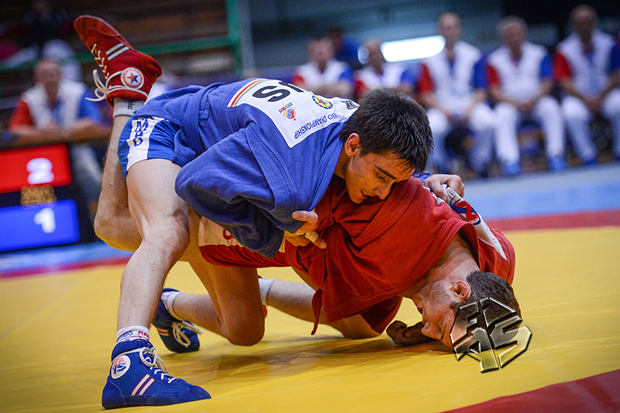 Igor Beglerov (Russia, 2nd place, sports sambo 52 kg): man-promise
"The personal account of Igor’s meetings with his rival Tigran Kirakosyan after today's final became 2:2. Igor promised that the next time he will simply have to win against Kirakosyan, and I’m sure he will keep his word," - said the coach of the Russian team Vladislav Gavrilov about the lost final. 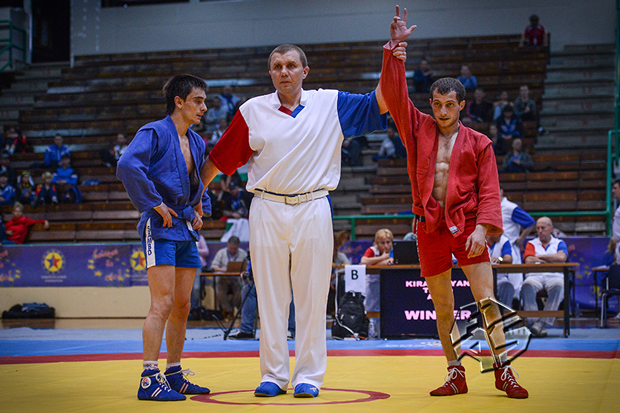 Tigran Kirakosyan (Armenia, 1st place, sports sambo 52 kg)
"Tigran is a born champion, in real life he’s a little secretive, quiet, and on the mat he releases all the emotions. Tigran is the champion of Universiade and Europe, and now all his thoughts are on the upcoming European Games in Baku. After 10 days at the training camp we will conduct a test bout that will determine who will represent Armenia in Baku. There is little time left to wait, "- shared his emotions from the final fight of his ward the Armenian coach.