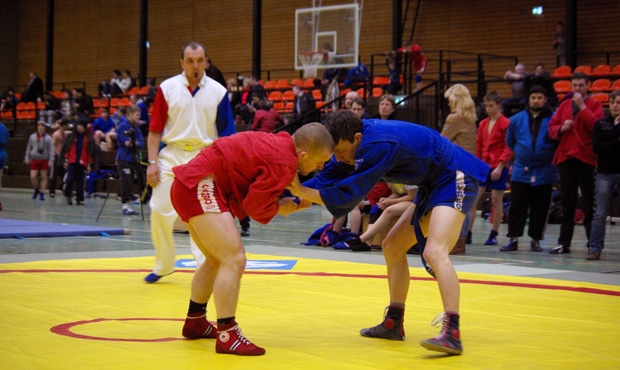 The German Sambo Championship was held in the small city of Syke near Bremen. Nearly 100 Sambo wrestlers from all over the country took part in the competition The sport and combat Sambo competitions took place on three mats, where the Sambo wrestlers pushed themselves to the limit.

As the German Sambo Federation reported, the Mayor of Syke, Suse Laue, gave the welcoming speech at the official opening of the competition.  Syke is a city with a population of about 25,000, where golf is the most popular sport, and tourists come from various cities and countries to play there. On March 4, 2015, Syke’s sporting life was enriched by a new sport – Sambo.

“There was a very friendly atmosphere before the competition, with all participants mingling with one another.  And after going out on the mat, each wrestler tried to prove he was the strongest and do everything possible to win,” says Josef Bart, President of the German Sambo Federation. “This was the first German national championship held under the new Sambo rules. The judges followed the matches closely and made every effort to evaluate the wresters’ actions expertly and objectively.  Finally, I’d like to mention that thanks to the changes in the rules, the fights moved faster, shortening the time for each fight and the competition as a whole.”

Mr. Bart thanked all the participants, judges and organizers of the event. “I would especially like to thank everyone who helped and supported us. You’re our main inspiration,” he said in closing.