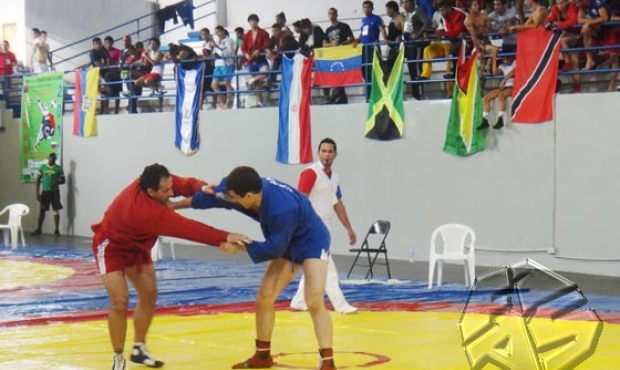 In this report you’ll find out by what buses athletes are traveling in Panama and who is “responsible” for the first ever medal of the Chilean national team at these competitions, as well as what is the weight and height of the heavyweight giant from Peru who won the “gold” of the continental championship today, and why Juan-Pablo Melo is so friendly in manner while communicating with athletes.

The Gimnasio Beto Remon gym which hosts the Pan American SAMBO Championship is a 15-minute drive from the Central Park Hotel which has housed all of the participants of these continental competitions. It is noteworthy that the American symbols – school buses are used for SAMBO fans transportation.

A school bus often becomes the hero of fiction films and cartoons. For example, in the animated series “The Magic School Bus”, it turned into a spaceship, and then decreased with the children to the size of bacteria, and went into incredible excursions to the most unexpected places. SAMBO school buses decorated with bright and original graffiti outside and dazzling trendy music and neon lights inside, seem to carry over all the passengers into some surreal reality, but SAMBO reality, because in these buses conversation are carried only on SAMBO.

It was in the bus where we congratulated the Chilean national team representative Franco Bulnes with the first in the history of their country bronze medal of the Pan American Championship and at the same time learned why its owner, a former judoist Ruben Soto (90 kg) became interested in SAMBO. Franco Bulnes said: “I am happy with the medal, for us it is a breakthrough. And I’d like to say about Ruben that he’s just a fine fellow today. How did he come in SAMBO? He attended a seminar for athletes which was carried out by the President of the Argentine SAMBO Federation Juan-Pablo Melo in Chile and just fell in love with SAMBO. And if there is love and work there will be always the result there.”

The result, also historical, was yielded for the Peruvian national team by the winner of the “gold” in weight category of +100 kg in Sports SAMBO Carlos Zegarra today. In a brief interview with the FIAS website the smiling Peruvian giant told us a little bit about himself: “With the height of 2 m and 10 cm my weight is 180 kg. I am a judoist, but having learned about SAMBO, I decided to try my hands in it. Why do I like it? Now there isn’t much in technique in judo, and SAMBO is a good opportunity not to limit yourself. My results in judo are 6 titles of the Pan American Championships and the 11th place at the Olympic Games in Beijing. In addition I have the Ukrainian origins: my grandmother came from the Ukraine”. When we asked him if he would continue performing at SAMBO competitions, Carlos said: “I think that I will have to choose between Judo and SAMBO, and this choice will be difficult”.

The athletes of Trinidad and Tobago don’t need to make a choice. Though in the past they are also judoists and even mixed martial arts fighters and representatives of jiu-jitsu, they have already made their choice in favor of SAMBO. And now this country is one of the recognized leaders of the Pan-American SAMBO. Today, the national team of Trinidad and Tobago won four medals: the “gold”, 2 “silver” and the “bronze”. Moreover all of these medals were won in Combat SAMBO which the country’s national team mainly specializes in.

Today the U.S. national team is also with medals. Among the Americans Viktor Petchenko came to the top, who won the silver in weight of +100 kg in Sports SAMBO (it was he who lost to the Chilean Carlos Zeggare in the finals) and Voychich Stsolinsky, who won the “bronze” for his team in weight category of 74 kg in Sports SAMBO. Note that Viktor is only 18 years old and the silver at such a serious “adult” start is a great success for him.

The Argentine national team also celebrates the success of the starting day of the continental championship, it has two “gold”, which were added to their team collection by Ariel Zganga (90kg, Sports SAMBO) and Diego Rosati (100 kg, Combat SAMBO). During the competitions, overseeing the Argentines’ fighting, we noted an interesting detail. While communicating and giving psychological support to his wards, the President of the Argentine SAMBO Federation Juan-Pablo Melo showed enviable care and attention – tied an athlete’s belt or helped to wear or take off racerbacks. Our question is for Juan-Pablo: “This is rarely seen, especially when it comes from a serious man – Head of the Federation. What are the roots of this care?” Head of the Argentine SAMBO said: “The fact is that I am a former athlete, and it’s not the ranks and titles that matters, it is humanity and care. Such gestures of care and attention, if you like, help me to motivate athletes, as well as to establish a closer contact with them. It is really important in “coach – student” tandem.