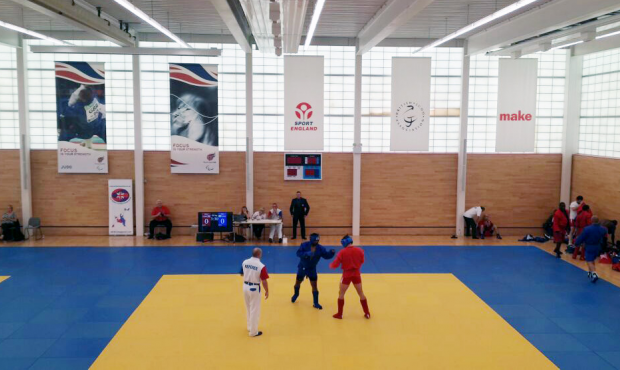 Yesterday English sambo wrestlers celebrated success, having taken the second place at the first Sambo President’s Cup in London. The tournament was held on September 27 at Bluewater Shopping Center. This time the venue of Sambo Championship of British Commonwealth States was different, but English sambo wrestlers managed to succeed again. They were the first as a team having won 16 medals of different value all together.

Although the Association of British Commonwealth States was founded 2 years ago, the Championship was held for the first time only this year. London was selected as a venue, as many of the today’s tournament participants have taken part in the President’s Cup the day before. While yesterday they had competed in a team tournament, today they had an opportunity to define the best in an individual classification tournament.

Sambo Championship of British Commonwealth States took place in Dartford Judo Club, located 30 km away from the capital of Great Britain. About 100 sambo wrestlers took part in the tournament from 10 Commonwealth States. English sportsmen were the best based on the tournament results – they won 16 medals, sambo wrestlers from Trinidad and Tobago ranked second in the final team result card with 7 medals, third were sportsmen from Australia with 6 medals.

“I think that the fact of holding such Championship is a great achievement and it is another step forward for Sambo Association of British Commonwealth States. Another good thing is that this is an additional opportunity for sportsmen to gain competitive experience, as many of them due to geographical distance cannot take part in the World’s Sambo Cups during the year. I spoke to the Presidents of the Commonwealth States Federations and they noted that there was no lack in sportsmen; however, there was a deficiency in professional coaches that would know our sport from the inside. This is an issue we should work on and I am sure that the Sports Department of the International Sambo Federation (FIAS) will resolve this problem in the nearest future”, – says the FIAS President Vasiliy Shestakov.