Chon Geum Moon: “Our primary goal is to win medals!” 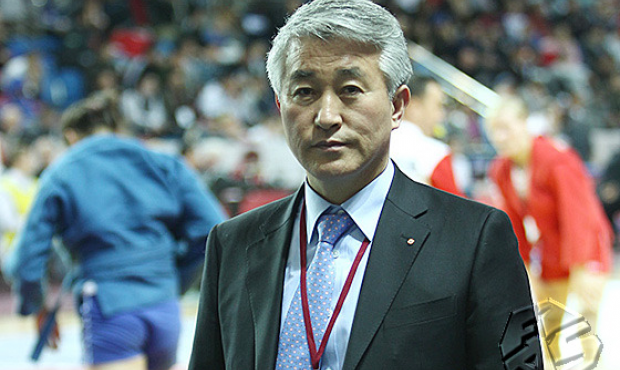 Sambist from South Korea surprised everyone at the World Cup stage “Memorial of A. Kharlampiev”. And that’s an understatement. If the team of this country used to have a tradition to loose already during the first bout of any major international tournament, then now the Koreans took “gold” in most prestigious competitions. The FIAS website as if anticipating a sensation in the making got a chance to talk to Chon Geum Moon, President of the Korea Sambo Federation, already during the preliminary bouts. He explained why taekwondists gladly move to SAMBO, what plans for the Universiade in Kazan the Koreans have as well as exclusively for the FIAS website he told a secret which he was keeping for a couple of years.

– What goals have you set at the World Cup stage “Memorial of A. Kharlampiev”?

– Our primary goal is to win medals. This competition is of much importance for us. Three sportsmen represent our country. Of course, every of them strive to win medals at the tournament which is named after the man who was one of the originators of SAMBO.

– How is this type of combat developed and known in South Korea?

– SAMBO has been developing in South Korea for 10 years already and it has travelled a long way during this time. If few people heard about it before, then already many of them know what kind of combat it is today. Sportsmen who used to do taekwondo, kudo, aikido, wrestling and other types of combat move to SAMBO more a more often today. In other words, people who have been doing combats and have a good understanding of them choose SAMBO as a priority type. It is hard for us to compete with the SAMBO trendsetters yet, but we strive to make progress little by little. If we could not win any bout before, then yesterday we already won one bout and have achieved success today too (the conversation had taken place during the second day of “Memorial of A. Kharlampiev” when Joo Yong Lim have not won his “gold” yet).

– What types of sport are the most popular in South Korea? What is broadcasted more often?

– As taekwondo is a Korean national type of sport, it receives a lot of attention from television. Besides, precisely this publicity and popularity of taekwondo has already bored everyone a lot. People are looking for something new and it often becomes one of stimuli for sportsmen to move to SAMBO. Now they have started to do SAMBO in sports halls where popular in Korea types of combat were traditionally cultivated. Many sports halls unite several types of combat, i.e. taekwondo and SAMBO, for example. It is also a big plus to us as people who come to these sports halls to do taekwondo find out about SAMBO and start doing this type of sport. It is quantity which matters for the owners of the sports halls, i.e. they need as many people as possible to come. They are we who care about quality in return, i.e. medals matter to us.

– What domestic competitions in SAMBO are held in South Korea?

– 3 large tournaments are yearly held here. They are the Open National Championship, the Championship for the prizes of the President of the National SAMBO Federation and the Qualifying Tournament to form the Korean national team. Every of these competitions gathers from 300 to 500 participants. Moreover, less large regional tournaments are occasionally held here. More than 60 sports halls where several thousand Koreans are doing this type of sport operate today in South Korea. A number of Russian coaches who teach sportsmen wisdoms of this combat have been invited to the country by the efforts of out Federation. Many people, including pupils, are doing SAMBO in Korea and I believe that it is possible to develop relations between the countries even more deeply when improving exchange in this area.

– What are the priorities of developing SAMBO in South Korea?

– There used to be only one goal “the more, the better” until today. We wanted as many people as possible to find out about SAMBO. Now while continuing work on attracting new sportsmen we have focused our attention on training and development of sambists who are able to win medals. We also provide intensive training of new coaches and referees. We therefore continue to develop broadwise and skyward.

– What is the attitude of the government and of the National Olympic Committee to SAMBO in South Korea?

– Our National Olympic Committee acknowledged the Korea SAMBO Federation. However, there are several stages of acknowledgement in the country and we do not receive financial aid from our NOC yet. But we are moving further in this direction. Today many politicians and other public figures are interested in SAMBO in South Korea. And I intend to do everything possible for it to become as popular as taekwondo both in our country and all over the world. I am very glad that such a major public official as Vladimir Putin, President of Russia, likes SAMBO and pays a lot of attention to its development. As far as I am concerned sambo competitions for the Russia’s President Vladimir Putin Cup were held in Japan. I would like the same tournament to be held in South Korea too.

– Is SAMBO spectacular enough in your opinion? What can be improved when organizing competitions?

– I find this combat to be a very interesting one though we do have things to work on. We even planned to open an International SAMBO Forum in South Korea last October. But we did not manage to organize it then. However, we do plan to organize it this autumn. The ways of improving SAMBO and directions for faster entrance in the Olympic family will be discussed there.

– Could you possibly express some of your suggestions already now?

– Well, it has been my secret and I have kept it but I am ready to tell it exclusively for the FIAS website. Before putting my thoughts into words I would like to emphasize once again the fact that all sportsmen who are doing popular in Korea combats consider SAMBO to be a popular and spectacular type of sport already now. And an uneasy way of acquisition of a license of a referee or a coach in Korea supports this fact indeed. It is necessary to complete full paid training. Many people go for it because they see a perspective and desire to open their own sports halls to teach SAMBO to new people.

Now as for new thoughts. Now a bout in SAMBO lasts 5 minutes and the sportsmen get noticeably tired at the end. Quality and spectacularity suffer because of it. I think it would be interesting to create 2 rounds lasting 3 minutes each and a break between these rounds. During the break a coach would have a chance to give new instructions to the sportsmen who in return could rest a little. I think it would be possible to see a more spectacular bout in this case. We can witness this approach both in boxing and ММА. I have been thinking about it for many years already. That’s why I ask you to mention at the website that this is my exclusive idea.

– We promise! And we ask you to answer one last question in return. Will the national team of South Korea participate in the Universiade-2013 and how important is it for you?

– It is a very significant event for us - as significant as for the whole sambo community. And the members of our national team have been already selected – the sportsmen have already passed the elimination competitions. Besides, one referee who has already received an invitation from the Organizing Committee of the Universiade will represent Korea. So, we will certainly participate in this tournament. And, of course, our primary goal is to win medals!