Dalil Scally: “Next African Continental Championship will be held in Tunisia” 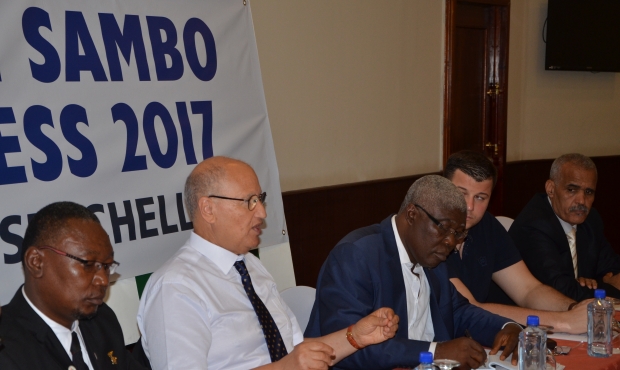 On May 11 in the city of Victoria (the Seychelles) the Congress of African Sambo Confederation, dedicated to the development of this sport in the continent as well the choice of the capital for the next African Championship, was held.

Representatives of 11 countries such as Morocco, Algeria, Tunisia, Benin, Cameroon, the Ivory Coast, Mauritius, Egypt, the Seychelles, Niger and Congo took part in the event under the chairmanship of FIAS Vice-President, President of African Sambo Confederation (ASC) Dalil Scally.

In the course of the Congress Dalil Scally summarized last year’s events, reviewed the work of the national federations, set new ambitious aims and goals. Having noted that sambo in Africa had made a huge step forward; he also touched upon some existing problems, having distinguished separate issue concerning the expansion of referee staff at major international competitions.

“Despite obvious achievements of African referees, whose representation reached 6 people at 2016 World Sambo Championship in Bulgaria; such success can be regarded as interim stage only, not as an ultimate goal. The number of African staff should constantly rise, - noted Scally. -  It is necessary to create a unified system of referee’s evaluation in African continent. This will contribute to the growth of the number of African referees at international tournaments”.

ASC Secretary General François Mbassi reminded of necessity to simplify the interaction between national sambo federations in Africa, since flight problems, their high cost and duration often become a serious obstacle for sportsmen. For that end, he reminded of the decision to divide African continent into 4 zones and to hold championships and training seminars within these zones. That way Morocco can become the center of the Northern part of Africa, Niger - of the Western, Cameroon – of the Central, the Seychelles – of the Southern part of African Continent.

After Mbassi Chief Technology Officer of Moroccan Sambo Federation Mohamed Aberouz gave the report. He emphasized that the success of African sportsmen year by year is getting more and more remarkable; they gain experience and win more medals. Thus, at the latter Grand Prix in Paris the Africans managed to win 4 gold medals and 3 silver medals. African representatives also managed to get on the podium at World Sambo Championship in Bulgaria and Kharlampiev Memorial in Moscow.

“The success of African sportsmen is especially valuable since sambo has no roots and history in our continent unlike Uzbekistan or Tajikistan”, - Aberouz noted.

In conclusion, congress participants discussed plans for the future, having endorsed initiative of the national federation to hold 2018 African Championship in Tunisia.