Do as I do: SAMBO athletes set the personal example in support of blood donation 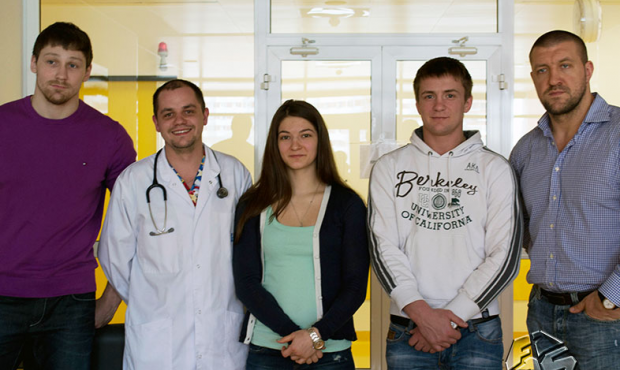 What is needed to cure a child from a serious illness? Qualified doctors, advanced technologies, expensive drugs... But there is another component, without which all of the abovementioned will be useless. It is donated blood and blood components. The Russian Federal Research and Clinical Centre of Pediatric Hematology, Oncology and Immunology named after Dmitry Rogachev, one of the best similar facilities in Europe, has almost everything. But, incredible as it may seem, donated blood is in short supply here. FIAS together with the photo project “We are living on this Earth” has decided to contribute to correcting the situation.

Acting under the principle of “The best method of persuasion – is a personal example”, SAMBO athletes decided: one should help not with words but with deeds. That is why in a spring sunny day four indifferent athletes went to the blood tank in FRC-PHOI named after Dmitry Rogachev (Moscow). People who play sports, know firsthand how health is important. FIAS representatives have repeatedly been at the Centre, brought gifts, talked with children, reviving their spirits.

– Everything related to charitable contributions, including cooperation with the Centre, is great and FIAS has the opportunity to take part in it, because children who have checked into the Centre, need support. Not only spiritual and emotional, but as it turned out, the material one – in terms of a material, namely – blood – says Dmitry Maximov, the two-time world champion, FIAS Sports Director.

At the Record Department all donors need to provide their passports and fill in a special questionnaire. Most of the questionnaire items are standard, but one of them has caused difficulty for champions. It was necessary to list the date and place of trips abroad over the past two years. Taking into consideration a huge number of competitions and training camps, in which titled SAMBO athletes participate annually, it seemed an impossible task. However, as it turned out, doctors are interested only in exotic countries – if a potential donor has visited them, he or she will be done a more detailed blood examination.

As it turned out, the Russian Champion 2012 and the World Championship Bronze Medalist 2012 Anastasia Valova has already been familiar to all the subtleties of blood donation. The SAMBO athlete told us that she has already donated blood for five times – went to the blood bank once, and then, as the saying goes, could not stop.

– Very courteous people always work at the blood banks. It does not hurt and is so fast, as well as it requires no recovery, that I don’t understand why so few people are engaged in similar business – shares her experience Anastasia. – We all should help each other, and the more helpless children. On my own behalf I ask people if it’s possible to come and donate blood. It is nothing for donors but human lives can be saved.

Before you go directly to the honorary donor’s chair, each person donates blood for examinations. Doctors thoroughly check for it to match all the criteria and fit in all respects. While waiting for a teammate near the office, the World SAMBO Champion 2011 Vladimir Prikazchikov shares his experience:

– I used to donate blood only once – in the army. But our today’s action has inspired me so much that in the future I plan to come here as often as possible in order to help young patients, – says Vladimir. – I look around and see how everything is sterile and modern, and once again realize that donation is safe on all sides. The only restriction, as the doctor explained to us, relates to athletes – after blood donation there may be some restriction on physical activity. Therefore, it is possible that I have to be absent from one training...

Physician-transfusiologist Nikolay Starostin confirms these words – champions should reduce physical activity for one or two days. As for the ordinary people who are not engaged in sports professionally, they have almost no major restrictions after blood donation. In addition, the doctor adds that it is even good for the body to donate blood regularly – hemodilution occurs, thereby the risk of strokes and heart attacks reduces.

– It takes just 10-15 minutes to donate whole blood. If a person is absolutely healthy, then the blood unit, we let, impairs the health in no way, – says Nikolay Starostin. – We take as much as needed in order not to harm a person. Our task is to provide the clinic with donated blood, but not at the cost of the donor’s health. That is why we always take care of people, do everything for a person to like it and come again and again.

As judged by the smile and good mood of the two-time European Champion and Russian Champion 2012 Vyacheslav Mikhajlin, he really liked the blood tank. The SAMBO athlete was at such a facility for the first time.

– I haven’t had a donation experience before, I haven’t just thought about it. Besides, I have never had hemophobia, so always believed that it’s not a big deal. And today I realized that this simple action can be of great help to people. Now it isn’t common for people to be engaged in it, but I believe that it is necessary to help one’s neighbor, – compares his notes Vyacheslav.

During our action at the blood tank in FRC-PHOI named after Dmitry Rogachev not only athletes, but also regular donors came here, many of whom were here not for the first time. Came by ones, came in pairs. As the Medical Centre staff told us, generally parents or relatives of young patients necessarily donate blood. But it is not enough, so it is very important for volunteers to come. – We are not always lack of donors but we still want more. Because our clinic is large, we have a lot of children and blood components are always needed – the more, the better.

We have quite a lot of regular donors who come permanently. Quite a lot of new people – they come and stay: come again and again, – says physician Nikolay Starostin.

A characteristic feature which should be noted: doctors and nurses necessarily say goodbye to all donors: “Goodbye! We are waiting for you again, come again”. Whenever possible, doctors try to emphasize that donors are always welcome. The Centre specialists do all their best for a person to like blood banks and come again. Some are ready to go at least every day, but there are certain rules.

– If a person donates platelets, then they may be donated again in 15 days. They are very quickly restored. If a person donates whole blood, he or she may come again in 60 days. In other words, every two months blood may be donated in stride, – says Nikolay Starostin. – With regard to our Centre, we always need platelets more, so first and foremost we ask to donate them. Our children need this component as after chemotherapy, which they have, there is a great deficiency of blood cells, including platelets. This, in its turn, causes a huge risk of bleeding. Children need daily platelets transfusions, so every day we need at least 15 donors.

Of course one our action can’t solve all the problems. But if each male or female SAMBO athlete who reads this article takes thought and helps someone with his or her donated blood, the problem will become a little bit smaller. And together all SAMBO community can take on the world. FIAS believes in it!

– Our action, I hope, will be followed by repercussions throughout SAMBO community, and guys will come to the blood bank and donate blood. I think it is very important and necessary, – says Dmitry Maximov, FIAS Sports Director. – The fact that we are involved in this – is a worthy expression of human qualities. Now I speak on behalf of the International SAMBO Federation, but it employs people in the first place. I urge all the people: come, participate, help people, and you’ll feel better from this!

P.S. Today, on April 20, the Donor’s Day is celebrated in Russia. If you live far away from Moscow and can’t come directly to the Federal Research and Clinical Centre of Pediatric Hematology, Oncology and Immunology named after Dmitry Rogachev, look at the list of medical institutions of your city and come to one of its blood bank.