Day one: what the winners and champions of the World Cup &quot;Kharlampiev Memorial&quot; 2016 talk about? 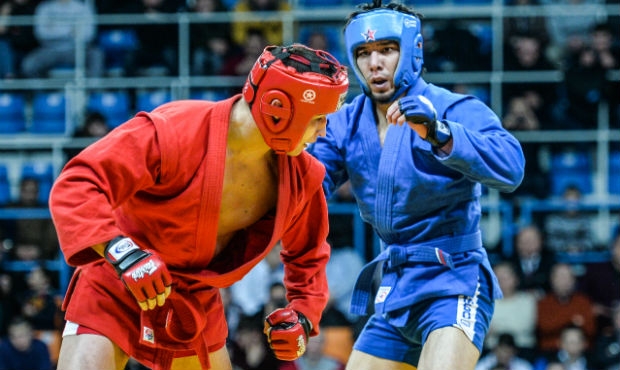 The first day of the "Kharlampiev Memorial" World Cup in Moscow has defined the names of champions and prize-winners in 12 weight categories among men and women and in combat sambo. The FIAS’s site has already reported the names of those who managed to climb the podium. But what emotions the champions and winners of the tournament experienced immediately after their fights you can find out right now.

Georgian sambo athlete Shorena Sharadze started her final match against the Russian sportswoman Oksana Lukyanchuk with little success. For a long time she was losing, but when the fight was coming to an end with only a few seconds remaining she was able to make an efficient action and snatch the victory. 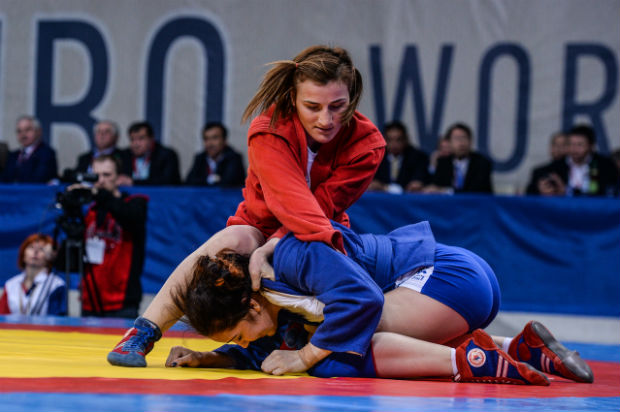 "I trained really hard to become a champion and when I was losing in the course of the match I realized it’s now or never. I was able to collect my wits and win! - she said in an interview to the FIAS’s site. – When I was going to the World Cup in Moscow, I dreamed only of gold. Other medals were not even considered, even though I knew it would be very difficult to achieve. When I get home my parents will be laying a large table approximately 50 meters long. We will celebrate my victory with friends and family."

And the representative of Russia in combat sambo section Vadim Shagin’s fight against the Armenian wrestler Samvel Badalyan was just as confident as it was quick. 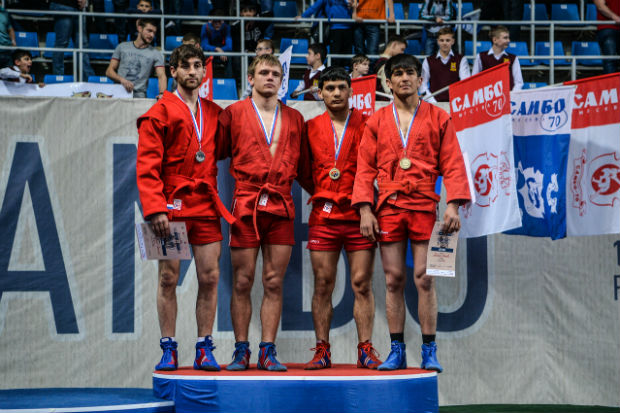 "I was confident of winning, well prepared and knew what to do during the fight. I’ve seen the rival several times on the mat and I knew what to expect from him, - said Vadim in the interview. – In the course of the fight, I first did a bit of reconnaissance: after all, my rival might try to surprise me. And then, I do not know why he went into active assault, and in that I'm stronger. I immediately did a throw and a hold-on and won with a clear advantage."

In the dispute over the fastest finals this combat sambo wrestler could well argue with a triple world champion Marina Mohnatkina known for her lightning-fast attacks completed by painful holds. However, the athlete was not in a hurry to finish this match and in an interview to the FIAS’s website she told us why.

"In my weight category there were few rivals. There were only two of us, and we met in the final. I wanted to fight a little longer to feel the experience of the international tournament, - said Marina. - The idea was to do my standard chain: a throw, then a painful hold. I did not want to finish quickly, and when I saw that we had been fighting for two minutes already, I decided that it was time to finish the match." 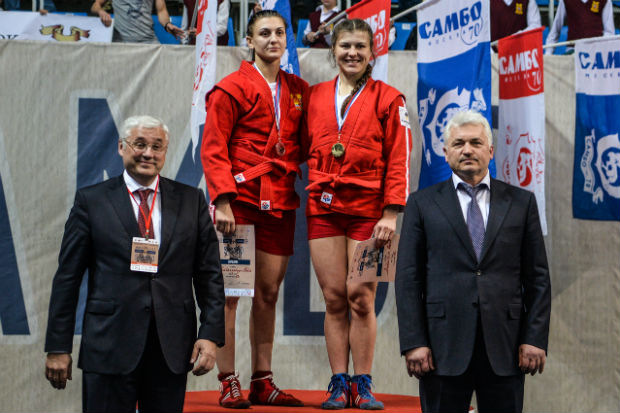 In an interview to the FIAS’s website before the start of the tournament Marina had already told how she manages to combine motherhood with the fighting. She also told that her husband stayed with the child during her performances in Moscow. However, at the World Sambo Championship this year, the couple will have it more difficult as they are both involved in the main sambo start of the year.

"This year, my husband has become the champion of Russia in sambo and I won gold in the national championship among women. Therefore, in autumn we are going to the World Cup in Bulgaria together. This is a family business. Our son will be left with his Grandmother for a few days. Having our genes, the baby is very active, so we can’t watch out for him at the World Cup", - said Marina.

While the Russian was being delighted by her gold, the Cameroonian sambist Paula Sitcheping was as happy if not more after she became the bronze medalist of the tournament. 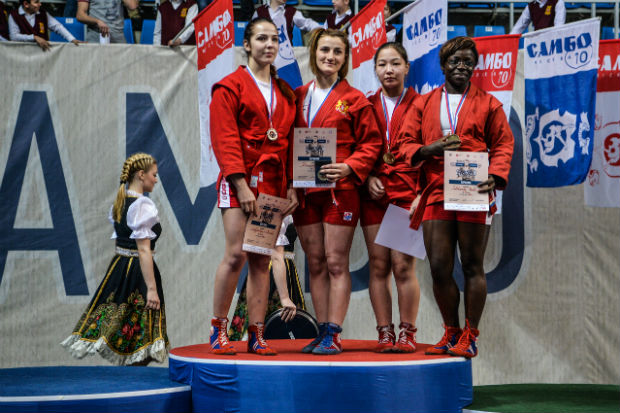 "Our girls were very well prepared for the World Cup, our whole team. I am happy that I was able to win the bronze medal in this competition. Of course, you always want more, but this result makes me also very pleased, - said in an interview to the FIAS’s site Paula Sitcheping. - I will work on to improve my scores and win awards in other competitions. I do sambo less than two years but I really like this sport because it involves a lot of interesting techniques. While in Cameroon there are not a lot of girls engaged in sambo it is sometimes difficult to find sparring partners in your weight. Nonetheless, we seek to develop further."

The American Johnson Jajoute had mixed feelings from the conquest of the bronze medal in the combat sambo section. The athlete said that he had started to practice combat sambo only a month ago so his medal can be considered a good achievement. However, he always aims at the best result only, that’s why he felt a slight bitterness from the lack of the gold medal. 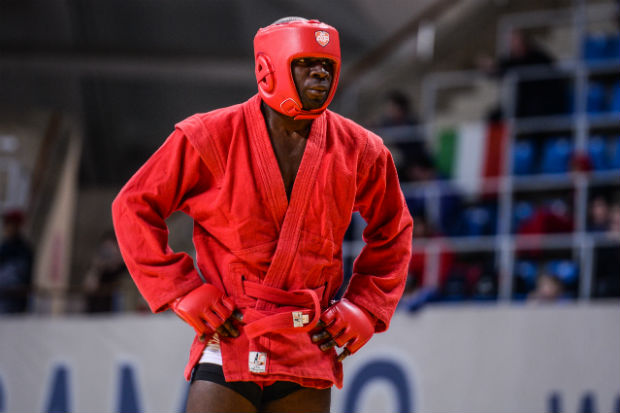 "When I participate in a competition it is always to get the maximum result. No one is trying to give all their best to achieve average results. Even though I’ve been training in sambo for only a month, I was focused on the gold. Many people may say: "Are you unhappy? Are you crazy? Only a month of training and you get a bronze at a major international tournament." But I still always strive only to win. Nevertheless, I am happy that I was able to be on the podium ", - he said in an interview to the FIAS’s site.

Johnson also explained his vision of why he was not able to achieve maximum results: 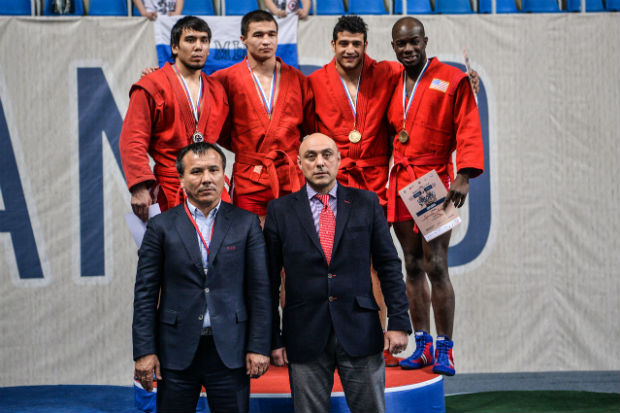 "It so happened that my first fight was against a guy who eventually won the gold. It was my first fight in a sambo tournament and I felt a certain excitement, so it is not surprising that I lost. But after that fight, I realized how I needed to act and managed to win the bronze medal. I am a professional MMA fighter and professional boxer. It was my first sambo tournament. I really liked it, especially the atmosphere in the hall. But most importantly, sambo gave me a new understanding of martial arts and filled up my technical arsenal. I think I will actively use it to compete in different sports", - said the representative of the United States.

While performing in Moscow, Russian sambo wrestlers always can count on the active support of the fans. And crowded stands of the sports complex "Druzhba" fully met these expectations. But even in such circumstances, the fans of one of the participants of the tournament, Andrey Perepelyuk, stood out from the crowd. Posters, banners and, of course, the noise - all this was provided by Andrey’s students from the famous school "Sambo-70". 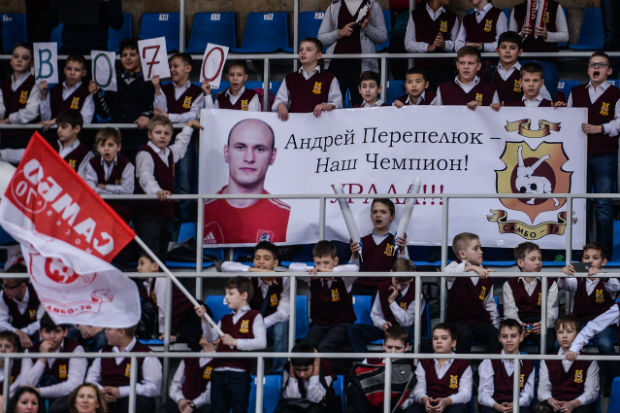 "This is my class, I train them, they came to cheer for me. I am very grateful to the guys: their support didn’t allow me to relax for a second, all the while it cheered me up and drove me forward. It made losing impossible", - said Andrey Perepelyuk.

The final battle against the Belarusian Timofey Emelyanov proved to be one of the most dramatic. 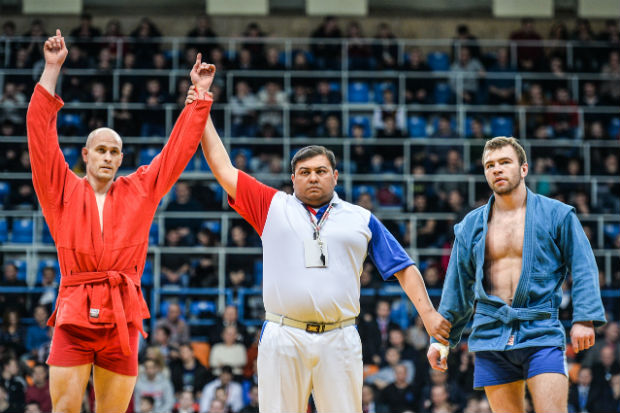 "The fight was on equal terms but I had a slight advantage which decided the outcome of the match. I knew my opponent well, have fought him before and lost to him. So I made my conclusions, and everything turned out well, - said Andrey Perepelyuk. - At the first training session after the event I’ll show the guys my medal and tell them to be ready for their future tournaments, work hard and become champions!"

This hard work exactly has helped become the champion to the representative of Uzbekistan Sarbon Ernazarov. After the victory he told in an interview to the FIAS how he managed to achieve such a result: 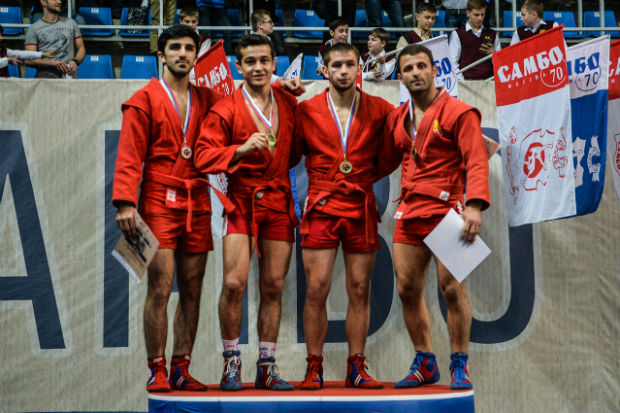 "Now the emotions, of course, are going wild. To be honest, for a long time I was purposefully preparing for this tournament. Last year I was the third here. It’s not that I was upset, but I realized what I had to work on. Had a well-developed tactic by the final. In the course of the match all went as planned. I would also like to thank all the staff and all the "Sambo-70" school coaches where I was preparing for the tournament for a long time with the help of Artem Nikolaevich Drokov. We looked through all the videos with the opponents’ performances and thought out tactics of conducting a duel with each of them."

Sarbon also told us how he found himself at the school "Sambo-70". 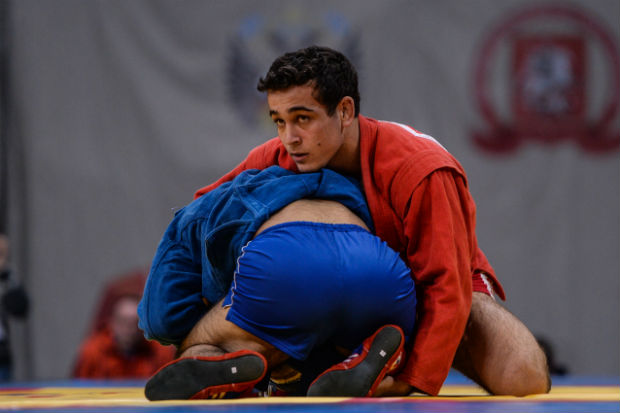 "I live and study in Moscow and perform for Uzbekistan. I began to do sambo at home and then I was very well received at the school "Sambo-70" where I train now. At the World Championship in Morocco I got third place. This defeat was the impetus for me to prepare and train even harder. You can’t have anything for free in sambo. Talent is nonsense, it is necessary to work more and more, then you get a result,"- said Sarbon.

One of the first to congratulate the athlete with a gold medal was the President of the Sambo Association of Uzbekistan Ravshan Akhmedzhanov. 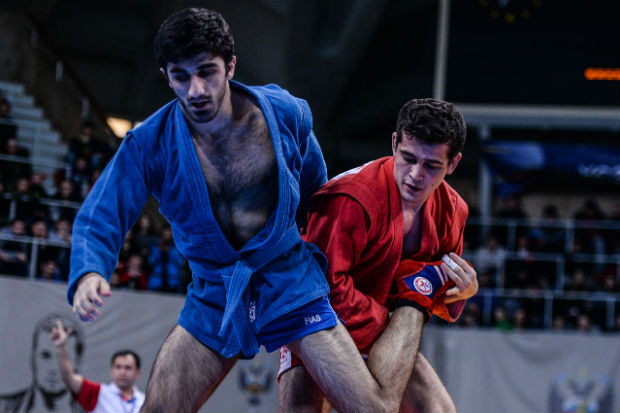 "For a long time, none of the representatives of Uzbekistan won gold in the tournament. The previous one was precisely Ravshan Akhmedzhanov who won the gold medal here at the first "Kharlampiev Memorial". And the second in history was me. This victory I dedicate to the whole of "Sambo-70" and my country!"- said Sarbon Ernazarov.

On the second day of the World Cup "Kharlampiev Memorial", March 26, 15 sets of medals will be played. Follow the progress of the tournament with the help of the online broadcast on the FIAS’s website.

[Photogallery] World Cup "Kharlampiev Memorial". Day 1
Tags:
Share
News on the topic
Blog
Recent photos
Latest news
Recent videos
Latest news
Follow latest news You are subscribed!
Thank you! Your confirmation email has been sent to your email.
This website uses cookies to ensure you get the best experience on our website More info Got it!