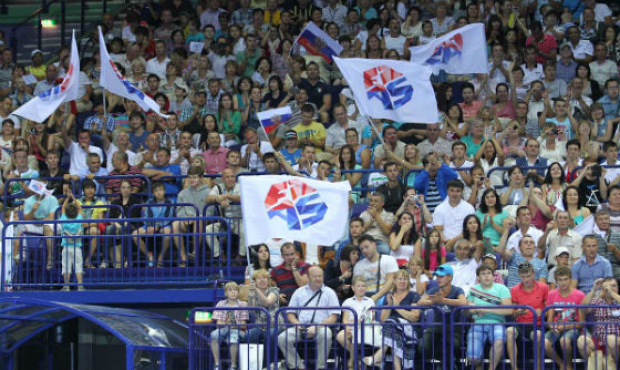 SAMBO debut at the Universiade was a great success! Overcrowded bleachers of Tatneft Arena, sensational victories and medals of national standing – these and much more were there on the first day of SAMBO tournament. What athletes had the loudest cheers? Who ran away from the journalists to the bleachers? In what cases do gold, silver and bronze become practically equal medals bringing happiness? What event will get into the history of the Universiade and SAMBO? Answers to these and other questions are available in the article on the first day of SAMBO tournament at the Universiade in Kazan at FIAS site.

Elena Bondareva from Russia was the first athlete in the world who won SAMBO tournament at the Universiade. Right after the award ceremony sambo athlete got surrounded by the journalists who of course wanted to know everything about the athlete’s feelings.

– Honestly speaking, I still haven’t realised what has happened. It is hard for me to imagine that thanks to this victory I have become a part of SAMBO or Universiade history. I think I will feel something special a little later, - said Elena being a little shy and very sincere. – It is my second performance in Kazan, last year I fought at the Student World Cup. At that time everything was organized just great, but the Universiade is something special. We have a certain feeling of some special friendship among the nations and the feeling of the total unity. 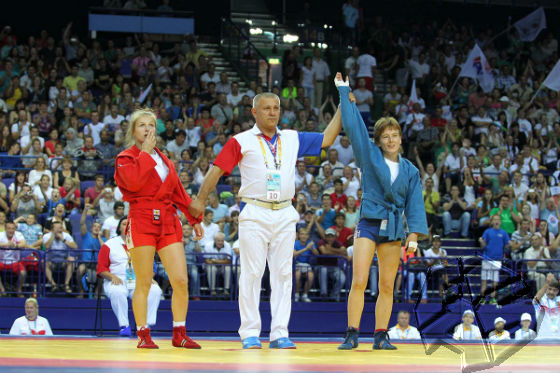 Tigran Kirakosyan from Armenia was the first men champion of the SAMBO tournament at the Universiade. However, the winner of the gold medal didn’t feel like sharing his emotions and mentioned that he can’t speak any languages but Armenian. Despite the journalists’ attempts to find a translator very quickly, Tigran managed to hide in the room under the bleachers where volunteers took him to the doping-control.

Unlike the shy Armenian man, Russian champion of the Unversiade Yana Kostenko turned out to be a real finding to the press. She spent a lot of time talking to the journalists and answered every questions of every reporter.

– The Universiade is like the Olympics to me and the medal I am holding in my hands is already a part of history, - says Yana. – In order to win the most important was to regain presence of mind. One can be very technical and physically prepared but if the nerves are not good it is very hard to win. Our fans on the bleachers who cheered for us in a loud and active manner helped me a lot. I got their energy and fought on the sambo mat at my best to thank the fans. 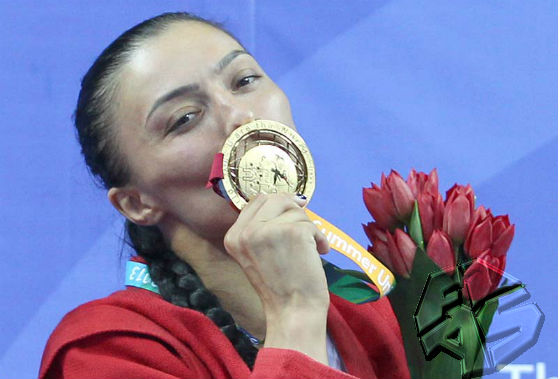 It is interesting that before the beginning of the finals animators at the stadium warmed up the fans and called to them to make a lot of noise the level of which was measured with a special device. SAMBO fans tried to beat the record that had been set earlier in the same hall by judo fans. The fans did their best but it seemed that the loudest sounds of excitement and applause came along when Yana rose onto the top tier. It is a pity that the sound-meter indications weren’t announced at that moment.

Only Belarusian fans managed for a few seconds to be louder than the Russian fans. During the fight of Denis Davydov from Russia and Alexandr Koksha from Belarus 6 representatives of the Belarusian team called out “BE-LA-RUS!” when all the bleachers kept silent watching everything that was happening on the mat. However, several seconds later the hosts of the Universiade in the amount of almost 10 thousand people called out “RU-SSIA!” and made this proud but definitely less powerful chant of the Belarusian team disappear.

The advantage even not so large also turned out to be on the Russian sambo athlete’s side. Denis Davydov became the owner of the gold but was severely told off by his coach.

– The coach was not satisfied with the fact that I hadn’t showed more interesting and spectacular SAMBO. I do understand myself that if I make it to such a tournament I have to do my best. It is the Universiade, a great sports event, moreover, it is our sports debut in the programme of the students games. This makes me happy and sad at the same time. I am looking at my medal right now and I understand how it got into my hands and it is a real present, - shared his emotions Denis Davydov. 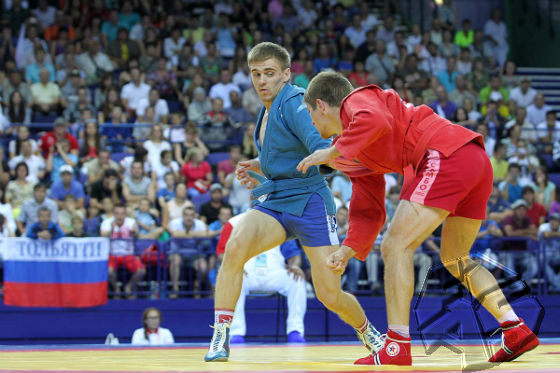 Not all journalists managed to ask their questions to the new champion of the Unversiade when he headed off from the mixed zone to the bleachers. The organizers and volunteers who were waiting for Denis at the entrance to the room under the bleachers were very surprised and had nothing to do…

Some time later the sportsman came back and again appeared in from of the press.

– Frankly speaking, I don’t know why I headed off to the bleachers. It all happened spontaneously. I found my parents, hugged my mum, shook my father’s hand and went back. On my way back I met a lot of folks who wanted to greet me, which made me late, - said Davydov.

Meanwhile, the athlete from Japan surprised everyone on the mat. Rui Takashi felt very confident in her fight with Zhanara Kusanova from Russia and she won with a big lead. It is interesting that during the award ceremony she received the medal from Fedor Emelyanenko who doesn’t need any special introduction.

– I am glad that I have won. I like Kazan a lot and I came to SAMBO from judo, - that is how the answers of the winner to the journalists’ questions were translated from the Japanese language. 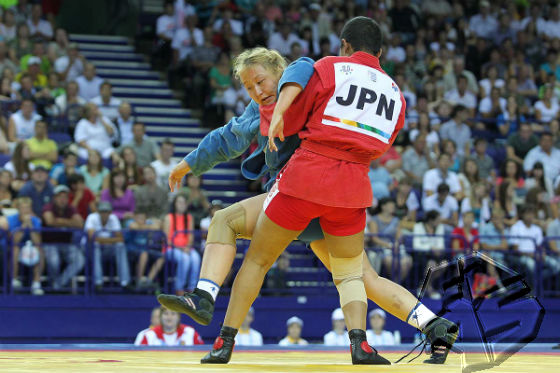 Her opponent, in her turn, pointed out the Japanese athlete’s great work on the mat and shared the piece of advice she had received from Fedor Emelyanenko.

– He also noted that the Japanese athlete had been good on the mat and he advised me to work on the stand more. This is how I can win over such opponents, – said Zhanara Kusanova.

The last fight of the first day of SAMBO at the Universiade will get into the history of the student games in a special way. The gold medal that was won by Pavel Rumyantsev turned out to be the 100th gold medal won by the Russian team at the Universiade. As FIAS has found out this fact had been given special importance in the International University Sports Federation (FISU), which indicates that SAMBO that had its debut at the Universiade has good chances to remain in the programme of the games. At the same time the hero himself noted that the ordinal number of the medal 100 has no importance to him personally.

– This medal has become the 100th not thanks to me but thanks to 99 athletes who had made everything before me. I haven’t thought about it yet. It is pleasant that our team showed good results during the first day, – said Pavel in his interview to the journalists. – I had tough time going through preliminaries, which is due to the end of the season. I am tired and I had little emotions. And during the final fight, thanks to the spectators, emotions got out. I warmed up during the tournament. There were no doubts about the success but the final fight was the toughest. I had a very strong though young opponent. He might lack some experience now but in future he will wreck everybody’s nerves. 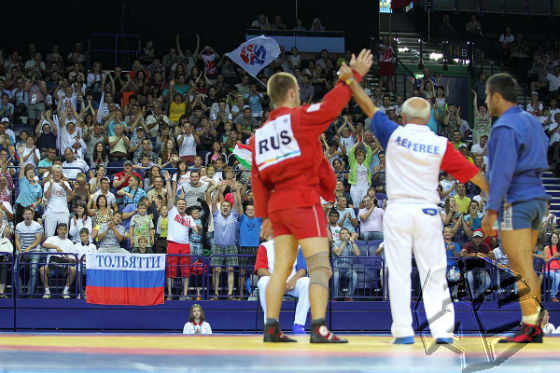 While the Russian was speaking about his opponent, the latter, with a happy smile on his face, was taken photos with his medal on the medal stand. This behavior of the sambo athlete from Tajikistan Komronshokh Ustopirion denied the well-known saying that ‘silver is not won, but the gold is lost’. He was sincerely happy with his medal.

He was probably nothing less happy than the sambo athlete from Bulgaria Martin Ivanov. His bronze medal at sambo tournament was the first medal of the Bulgarian team at the Universiade in Kazan. Thanks to the sambo athlete, the national team finally got to the teams total. That is why we want to finish this article with the words that were at the very beginning thereof: SAMBO debut at the Universiade was a great success!