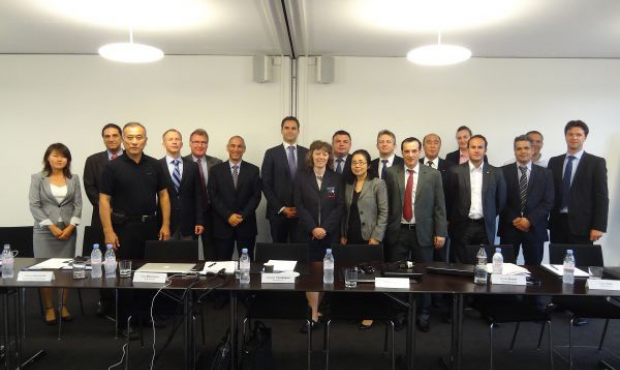 The coaches of SAMBO wrestlers, who will take part in the “SportAccord” World Combat Games, should take not only sports clothes, but also a regular suit to Saint Petersburg with them. The Organizing Committee obliged all the coaches, who will second the athletes in the final block of competitions, to stick to the dress code – suit and tie. This and other requirements were under discussion in Lausanne at the meeting of the technical delegates of international sports federations with the preparation works for the coming “SportAccord” Games as a core issue.

There is not much time left before the start of the tournament. It means that the majority of preparation issues are settled. In particular, the beginning of August became the deadline for the application submission of athletes, coaches and representatives of the federations for the participation in the SAMBO competitions listed in the program of the Games. The same deadline applies to other Martial Arts that will be represented at the tournament in Saint Petersburg.

The technical delegates of all 15 international federations of combat sports, represented in the program of “SportAccord” World Combat Games, took part in the meeting held in Lausanne. The meeting gave an opportunity to discuss and settle the remaining issues connected with the organization of the sports event. The specialists spent 2 days, analyzing in details all aspects of the preparation works for the event that is scheduled to start in 3 months. As Mr.Vlad Marinescu, Director General of “Sport Accord” underlined, the very unity and effective cooperation of all the participants of the event would let us organize the Games in Saint Petersburg on the level, which will set the pattern for all “SportAccord” events in the future.

It is worth noting that the event is being prepared in the interests of the main persons of each and every competition – those who attend and watch it. For the sports fans it is the visual appeal of a competition that matters. When it comes to SAMBO competitions, they will comply with the modern requirements of television, as well as the rules for conducting the most spectacular show. The new sports complex “Spartak”, which will be commissioned on September 1, allows us to bring to life completely everything that we planned.

“The experience of SAMBO tournament at Kazan Universiade shows us that all the participants of multi-sports competitions must strictly follow the requirements of the organizing committee. Everything matters here – from the access zone according to accreditations to the way people look” – as Sergey Tabakov, FIAS Executive Director and technical delegate at the Games, says.

A great number of the organization issues were raised and discussed in detail during the meeting. Though the participants looked tired after two busy days, they were satisfied with the outcomes. Technical delegates of international sports federations were irradiating optimism and were charged with enthusiasm about such an important and big sports event of international importance as “SportAccord” World Combat Games in Saint Petersburg. We’ll see very soon whether they will manage to realize everything planed to the fullest extent. The tournament will take place from October 18 to 26.