Sambo World Cup Stage – the International tournament “For the prizes of the President of the Republic of Belarus”: the winners of the first Minsk bronze medals are named 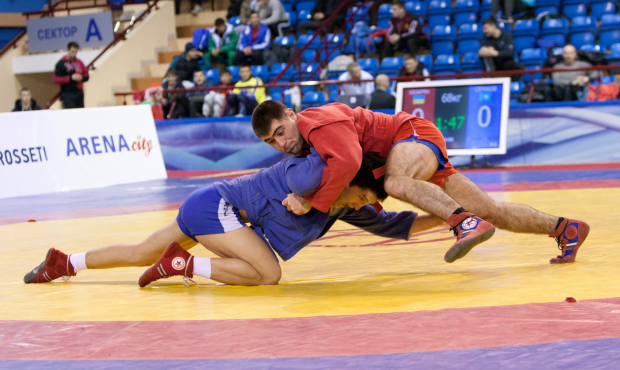 Minsk Sports Palace has gathered today the representatives of 11 countries who are contesting medals and titles of the prestigious World Cup Stage. The names of the finalists are already known, the opening ceremony of the tournament and the fight for the bronze medals begin at 17:00. Meanwhile we will tell you about the most spectacular fights for the bronze medals.

The fight for the right to get on the third step of the victory podium was held among the representatives of the Georgian, Russian, Ukrainian, Kazakh and Latvian teams.

The most spectacular ones were the fights in the weight category of 52 kg. At first Aset Aldeshov, leading with 4 scores, made a perfect lateral drop throw –effective and fast. And the most important – he remained in the position that brought him an ahead of time (2 minutes before the end) victory over Maxim Krasinsky from Belarus. The second fight for the bronze medal in this weight category was won ahead of time by the Georgian Givi Nadareishvili against the Moldavian Ivan Balan. At the fight start two 4-score throws with the returned back from the position lit 8:0 on the panel, and the “jadwiga” that was made in the perfect manner allowed the Georgian to complete the fight ahead of time.

The representatives of Latvia could not interfere in the fight for medals today, in both their fights for the bronze medals they yielded to the Georgians. Therefore, Nico Kutsio was stronger than the Latvian Germans Zhukovs in the weight category of 82 kg: the victory was brought to him with a 2-score grip from inside and the retention. In the heavy weight category the Latvian Arturs Nikiforenko had nothing to oppose to the Georgian Sambo athlete Giorgi Nozadze. The leading Latvian Sambo athlete missed a minimally estimated throw, risking, covered himself for the retention, making an overhead throw, and as the result turned below the line of prize winners. Giorgi Nozadze won the bronze medal of Minsk World Cup Stage. The second bronze winner in the heavy weight category was Sergei Borisochkin from Russia who prevailed over the Belarusian Kirill Milyutin in his main fight.

In the weight category of 68 kg the fight between the Kazakh Nurol Serikov and Gor Kazaryan from Ukraine happened to be spectacular. A 4 score grip from inside of the Kazakh athlete was stronger and more beautiful, and what is more important – more effective than the over the back throw from the knees of the Ukrainian estimated at 2 scores, and as the result the bronze medal left for Kazakhstan. The second bronze medal in this weight category was given to Pavel Langvinenko from Russia.

The fight in the weight of 74 kg between the Russian Alexander Saraikin and the Turkman Sambo athlete Samvel Airapetyan was full of tension and vigour. The Russian was losing 1 score one minute before the fight end. A 4-score pick up throw under 2 legs and a 2-score mill-circle of the arms drew the Russian forth, but this is Sambo, and 30 seconds before the fight end Airapetyan made a 4-score overhead throw, the judge recorded the retention and with the final score 9:6 the Turkman Sambo athlete celebrated the victory in the fight for the bronze medal in this weight category.

Vasily Kuznetsov from Belarus was the only one who made painful leg lock in small finals of the current tournament and prevailed his countryman Ilya Asin in the fight for the bronze medal.