“We Will Hold This Tournament Until We Are Alive” 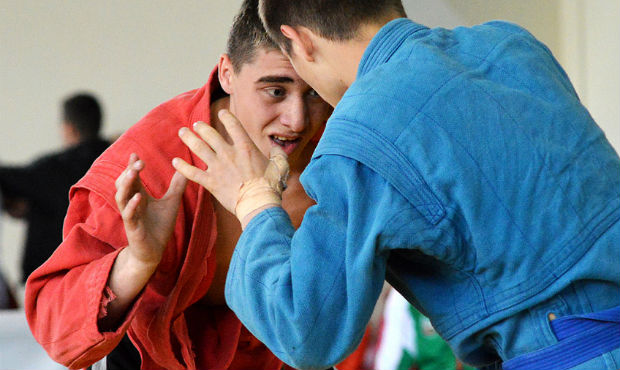 The 30th Anniversary A. Doga Memorial International Tournament was held on May 10 in Chisinau, Moldova. Sambo athletes from Moldova and Bulgaria demonstrated their skills in the head-to-head fights in the big hall of USEFS. The report on the FIAS website comprises the solemn opening ceremony, intense struggle on the mats and warm memoirs of pupils of Andrei Doga, Honoured Coach of the USSR and Moldova.

The A. Doga Memorial International Sambo Tournament has been held regularly since 1984, when the great master has gone. This is a great work of the organisers of the competition and admirers of the celebrated coach. Andrei Andreevich Doga’s followers do not pay attention to the years passed.

- We will hold this tournament until we are alive, honoured coach of Moldova, master of sports, Andrei Doga’s pupil Ivan Kurdov said. – This was a real personality who deserved to be eternally remembered.

Athletes from different Moldovan cities and towns and welcome guests from the capital of Bulgaria – Sofia – fought for the awards of the tournament. Despite the fact that favourites are the winners in the final protocols, the way to victory was not easy for all of them. The fight of two winners of the World Youth Championship in the weight category of 82 kg, where Yuri Leu and Dorel Scoarta performed before the audience, was very intense. Both sambo athletes are the pupils of Mikhail Chudin, Honoured Coach of Moldova. During the fight, Yuri managed to hold an action for which he has been given two points. With such a score he won the fight. But Vyacheslav Plemedyale (coach - Viktor Gorobets) easily defeated Bulgarian Plamenn Churov - 12:2 - in the weight category of 68 kg (Andrei Doga used to fight in this category).

It is interesting that in addition to medals for the winners, as well as prizes from sponsors, two sambo athletes were awarded special prizes from A. Doga’s family. TV sets were awarded to Vyacheslav Plemedyale and Nikolai Foka, the youngest participant of the tournament, who is only 16 years old.

A lot of people who personally knew Andrei Doga traditionally meet at the tournament. It is them who can tell things about the coach that one will never learn from anywhere else.

- It was long ago. In 1963, at the Sports Contest of the peoples of the USSR, in the fight for the bronze medal, my opponent used a painful arm lock. A few seconds were left until the end of the fight. Andrei Doga was crying, “Hold on, don’t give up, three seconds left... two... one... Well done!” This is how we won the bronze medal.

- I was trained by Andrei Doga for just two years. But there was one evident thing in him – he attracted young guys like a magnet. He could convince athletes and valued human qualities. He enjoyed great prestige in the All-Union Sambo Federation, as well as among Soviet specialists.

- I remembered forever the day when Andrei Andreevich handed me the badge and the certificate of the USSR Master of Sports in Sambo in the presence of many fighters. I was the first master of sports of his pupils who earned this title. “Semyon, let your example be a lesson to others. I am convinced that your comrades will fulfill this standard in the near future,” Andrei Andreevich said.

Nikolai Bolboceanu, director of the Republican wrestling school named after A. Doga, master of sports:

- Andrei Doga was a man of his word. Having fulfilled the standard to get the grade of the master of sports, I was going for practice in the Donduseni district. Andrei felt that I worried about the result. He looked at me and said, “Kolya, don’t worry. You’re actually a master of sports, rather than on paper. I’ll do the rest.”

And soon I received the documents of awarding the title.

[Photogallery] Memorial of A. Dogi 2014
Tags:
Share
Blog
Recent photos
Latest news
Recent videos
Latest news
Follow latest news You are subscribed!
Thank you! Your confirmation email has been sent to your email.
This website uses cookies to ensure you get the best experience on our website More info Got it!