FIAS at the AIPS Congress 2017 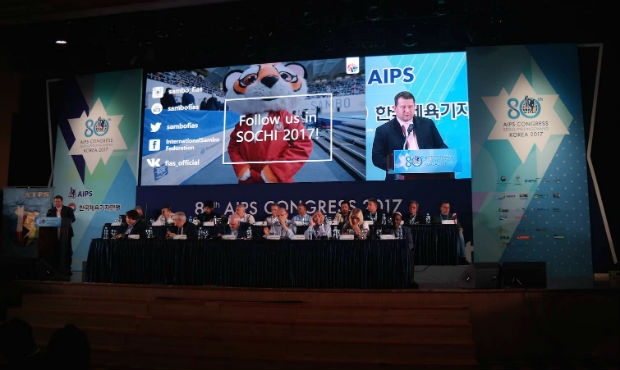 The International SAMBO Federation (FIAS) participated at the 80th Congress of the International Sports Press Association (AIPS) from 10 to 12 of May 2017 in Seoul – PyeongChang, Republic of Korea.

The official part of the event was split into two days of presentation sessions and one day of the official electoral AIPS Congress. The event was opened by the AIPS President Mr Gianni Merlo. The President of the International Olympic Committee (IOC) Mr Thomas Bach delivered a welcome speech through a teleconference. Also, the welcome address was given by the IOC member Mr Seung Min Ryu. 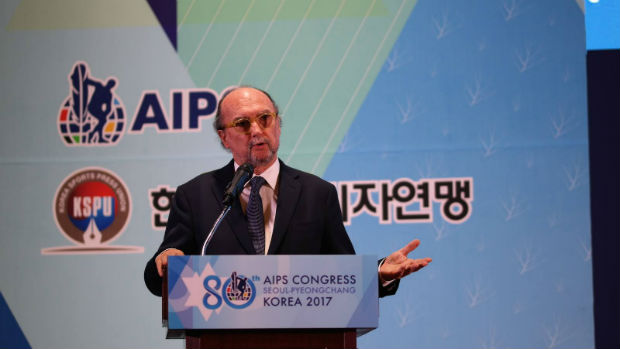 The first Congress day was filled with interesting presentations. The President of International Association of Athletics Federations (IAAF) Mr Sebastian Coe spoke about the transparency, governance and changes in IAAF. After the International Judo Federation (IJF) Media Director Mr Nicolas Messner shared with the participants the latest progress of the IJF, including the projects related to its development. The Organising Committee of Tokyo 2020 updated to the delegates the latest communication and media successes. Furthermore, the IOC Head of Media Operation and Planning Mr Anthony Edgar informed the journalists about the latest preparations for the Winter Olympics Games in PyeongChang 2018. Also, the Union of European Football Associations (UEFA) and the International University Sports Federation (FISU) briefed the delegates about their upcoming events. In closing Mr Seppelt, ARD journalist, concluded that first day of the Congress in Seoul with a very interesting panel discussion about the investigation journalism in sport.

Early morning on 11 of May the delegates relocated to PyeongChang, where in the Alpensia Convention Centre, the Congress continued the presentation session. Most of all this day was marked by the fact that the FIAS had a speech. The FIAS CEO Mr Michal Buchel made a presentation which gave to the journalists an overview about the recent digital-strategy. He shared and provided some statistics of target audience in social networks, some inside figures of spectators during online broadcasting of competitions in the Internet. 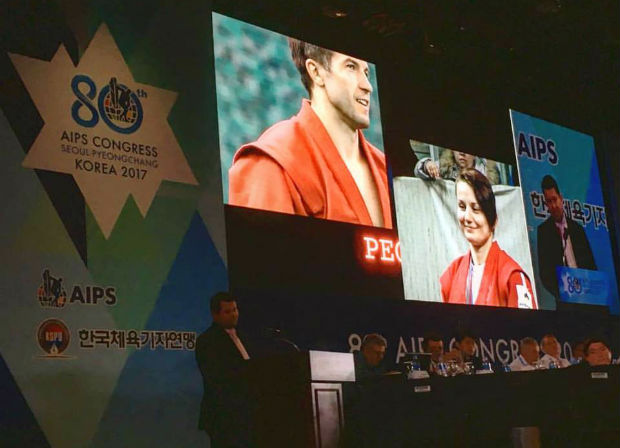 The FIAS has representatives from 190 countries all over the world, who subscribe to FIAS groups in social networks. The interaction throughout the social media allows admires to follow most of live tournaments, and it also allows personal media to get the results promptly and to find new SAMBO figures. Consequently, the overall information gives sponsors a chance to be seen worldwide.

Moreover, the participants received the latest update about the achievement of Special Olympics, International Federation of Bodybuilding and Fitness (IFBB), Organising Committee of the International Swimming Federation (FINA) World Championship 2019 and the Asian Indoor and Martial Arts Games 2017 in Ashgabat.

On the final day of the 80th AIPS Congress, the elections were held for the new four-year term of the Executive Committee (2017- 2021). AIPS President Mr Gianni Merlo was re-elected for fourth term, having run for the Presidential post unopposed. It is also important to emphasize that the AIPS SAMBO Commission member Mr Nikolay Dolgopolov was elected by the clear majority of votes as the AIPS vice-president.

The official programme was concluded by the visit of the Olympic Venues.