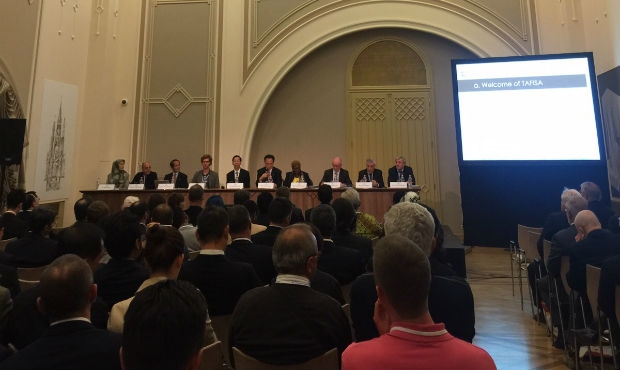 From 14 to 18 October 2015 in Budapest was held the 24th TAFISA World Congress - the International Sport for All Association in which participates 450 representatives of 76 countries, including the FIAS. Within the Congress, October 14, the commission of expert was held under the leadership of the Secretary-General of the TAFISA Mr Wolfgang Baumann.

"We ae looking to find a systematic approach in the field of martial arts. Certainly, this issue must be resolved in accordance with the statutory goals and objectives of TAFISA, as well as to avoid other alternative activities of organizations working in this field. The TAFISA goal  underline the special power of martial arts as a means of increasing the number of members within the movement of "sport for all" and physical culture in General, "said Baumann.

The participants of the Expert Council agreed on the need to create a platform for discussion of future strategy, including the establishment of TAFISA "martial arts and sport for all". The supporting members of TAFISA - international sport organisation agreed to establish a working group which will work on the strategies and study the opportunity of organisation of the martial art demonstration events or festivals.

There is a large number of martial arts with their unique traditions, values and culture. The platform of Sport for All should be a great opportunity to develop and make popularization of national and traditional martial arts which are truly unique in its kind. We believe that tradition and national types of martial arts could be bring a powerful and new impulse to the development and promotion of martial arts worldwide.

By February 2016, all members of the working group will meet again in the and in mean time they should submit its proposals on the further development to TAFISA.

On October 15, 2015 the 24th TAFISA World Congress - international sport for all Association have had official opening ceremony attended by the dignitaries of European Commission, IOC, Hungarian NOC and Government Ministry. The World Congress was hosted by the Hungarian Leisure Sport Organisation chaired by the Olympic Champion in swimming Mr Attila Csene.

At the opening ceremony, TAFISA Secretary General Mr Baumann pointed out the main trends in the development of mass sports in real time:

The program of the TAFISA World Congress includes interesting presentations, extensive discussions and opportunities for informal communication and relationship-building. Also initiates the opportunities for new alliances and partnerships.

Friday, October 16, 2015 the TAFISA General Assembly was held in Budapest beautiful concert hall of Vigado and was attended by the representatives of more than 70 countries - the members, supporting members and associate members of TAFISA. The FIAS as the supporting member was represented by its CEO Mr Buchel.

The General Assembly provided an opportunity to discuss many issues of successful modern sports and it is a decision-making platform for the upcoming period. This unique annual raised area on which all the experts where able to find answers to a variety of issues. FIAS will work very closely with the TAFISA on the development of the sports for all through the SAMBO sport.

During the TAFISA General Assembly the participants learned about the most updated situation in preparation of the TAFISA World Games 2016 which will take place in the capital city of Indonesia - Jakarta.

TAFISA Association founded in 1991 year in France. At present the Association consists of more than 200 member organizations in more than 130 countries from all continents. TAFISA is the leading association in the global movement of leisure and mass sports. The Organization's headquarters is located in Frankfurt am Main.