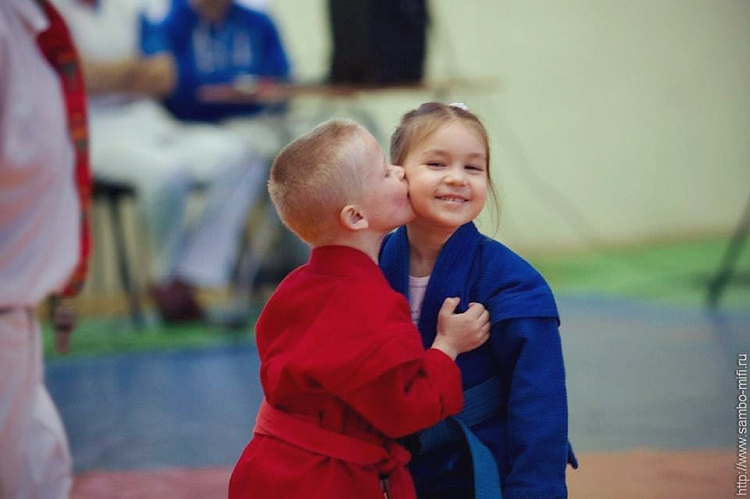 The first group of women's SAMBO was organized at the Moscow school in 1938. These girls became the founders of women's SAMBO in Russia. The first official competitions between training groups of SAMBO wrestlers were held in 1970, sambo wrestling competitions attracted a large number of spectators, all of them noted the high entertainment and aesthetics of the tournament. The first SAMBO championships for women was held in 1983 in Madrid, Spain.

FIAS continue to ensure equal opportunities for women in SAMBO, competing and coaching environments, free from discrimination and harassment and gender inequality. The SDG goal 5, Gender equality and promotion of women rights in the civil society is incorporated into FIAS focused initiatives in the Women’s commission and we are proud to showcase many women athletes taking part in SAMBO events. Among the commitments made by the International SAMBO Federation (FIAS) at its 2016 Annual Congress was to encourage the development of the women's side of the sport. FIAS has witnessed an ever-growing increase in women’s participation at SAMBO events and has launched a gender equality campaign, entitled "Share Your Story", where female sambists are encouraged to share sporting challenges on their social media pages. Later as well FIAS launched another campaign called #GameChangers to celebrate female athletes and promote gender equality. FIAS has also been supporting United Nations campaigns aimed at stopping violence against women.

International Women's Day celebrations range from a public holiday in some countries to being largely ignored in other countries. In some places, it is a day of protest; in others, it is a day of celebration of femininity. However, the world has made unprecedented advances, but no country has achieved gender equality.

This year, the theme for International Women’s Day (by UN), “Women in leadership: Achieving an equal future in a COVID-19 world,” celebrates the tremendous efforts by women and girls around the world in shaping a more equal future and recovery from the COVID-19 pandemic and highlights the gaps that remain.

It is also aligned with the priority theme of the 65th session of the Commission on the Status of Women, "Women in public life, equal participation in decision making" and the flagship Generation Equality campaign, which calls for women’s right to decision-making in all areas of life, equal pay, equal sharing of unpaid care and domestic work, an end all forms of violence against women and girls, and health-care services that respond to their needs.

When women lead, we see positive results. Women of the world want and deserve an equal future free from stigma, stereotypes and violence; a future that’s sustainable, peaceful, with equal rights and opportunities for all. To get us there, the world needs women at every table where decisions are being made.

International Women’s Day is a time to reflect on progress made, to call for change and to celebrate acts of courage and determination by ordinary women, who have played an extraordinary role in the history of their countries and communities.

The International SAMBO Federation is happy to congratulate all of wonderful women of the world and celebrate the social, economic, cultural, and political achievements of women, as well as admire women's power and brave, beauty and femaleness, intelligence, and wisdom. We believe that you can make this world a better place.