FIAS has signed a cooperation agreement with the "Amur tiger" Center 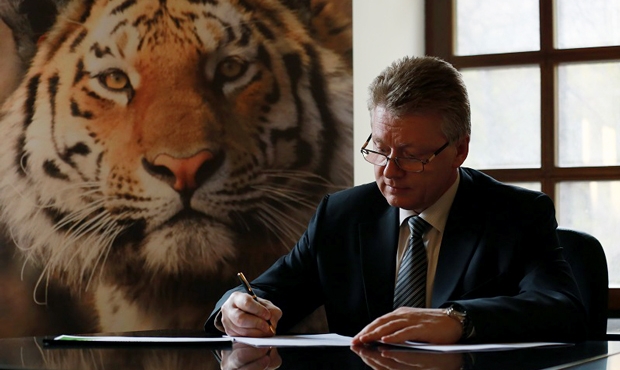 The International Sambo Federation and the autonomous non-profit organization "Center for the Study and Conservation of the Amur Tiger" signed a cooperation agreement on May 5. The aim of this cooperation is to unite efforts for the development and popularization of sambo as well as for maintaining and increasing the population of the Amur tiger. The partnership will allow the two organizations to render each other mutual assistance and cooperation in various activities.

As follows from the document, the parties will jointly organize and carry out charity events, sports, demonstrations and other events. They will be directed at the development and popularization of sambo, on the one hand, and on the other, to the attraction of public attention to the problem of preserving and increasing the population of the Amur tiger.

FIAS President Vasily Shestakov commented on the signing of such an important document: "Sambo is a sport that teaches the ability to stand up for themselves and protect their loved ones. Social responsibility is an important direction of development of modern sambo, social projects are a priority in the strategy of FIAS. That is why the Executive Committee of the International Sambo Federation which met in late March in Moscow unanimously supported the initiative of the guardianship of the tiger and approved the image of this tiger as the official mascot of the federation. It will not only be a symbol of good luck for the whole world of sambo but will also serve as an additional impetus to the development of programs to protect animals and the environment.”

Speaking about cooperation with the "Amur tiger" Center, I'm sure it will draw the attention of the sambo family and the public to the problem of extinction of the Amur tiger and other rare animals. I hope that other sports federations around the world will support FIAS and take care of various endangered animals. We have managed to identify a number of very important and useful initiatives to attract public attention to the problem of the disappearance of the Amur tiger population with our colleagues from the Center. In addition to sports and demonstration activities, we are also planning to launch a project for the training of law enforcement agents according to a special sambo program”.

General director of the "Amur tiger" Andrey Smirnov commented on the signing of the agreement: "The "Amur tiger" Center aims to draw public attention to the problem of the preservation of the Amur tiger. Thanks to the cooperation with the International Sambo Federation the entire world will learn about this endangered predator. We hope that the tiger mascot will agree with professional and novice athletes and fans of sambo in the world, and thereby allow us to draw attention to the problems of preservation of this animal. Only by combining our efforts we can achieve some results and save the Amur tiger for future generations".

For reference: The Amur tiger is the largest tiger subspecies in the world. The body length of males reaches 220 cm; their weight is 260 kilograms or more. The life expectancy of the Amur tiger is 15-20 years but the zoo animals can live longer. Virtually the entire population of this rare animal lives in Russia, sometimes it is found in China, mainly along the Russian border.

In the twentieth century the Amur tiger population has decreased significantly. According to the last census conducted in 2005 there remained no more than 500 individuals in the wild. The tiger has become rare primarily due to habitat destruction and illegal hunting.