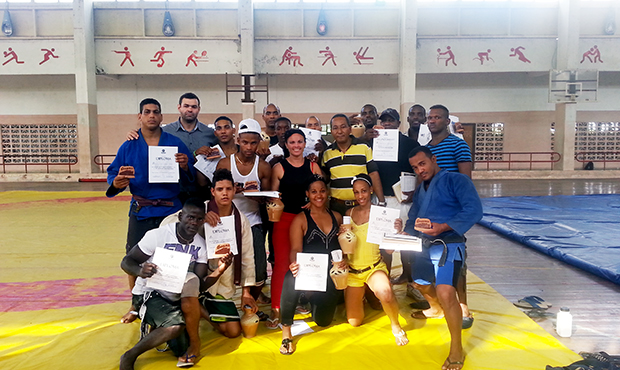 Having been held in this country for the second time, the Cuban Sambo Championship has taken place in the province of Granma this year. This place is considered the cradle of the Cuban nation and comprises almost half of the important historical sites in Cuba.

The province got its name in honour of the yacht called the Granma. There were 82 revolutionaries led by Fidel Castro and Che Guevara on board the yacht who landed on the coast of Cuba in 1956.

The Cuban Sambo Championship gathered about 50 athletes from 5 teams from different provinces of Cuba in Granma. They were mostly men. But the fair sex, though in small number (3 women), took part in the championship as well. What concerns sports in Cuba, baseball, boxing, athletics and volleyball are prioritized. Cuba is the birthplace of many world famous athletes, but unfortunately, there are no sambo ones yet. However, given the fact the Constitution of Cuba says that "the State directs and encourages the development of physical culture and sports in all its manifestations as a means of education and all-round development of the individual," we hope that with proper promotion and drawing attention of the Cuban sports officials to our sport another state may appear on the sambo world map in a short time.

But all this is ahead. For now the main task of sambo athletes here is to increase interest in sambo and tell sports fans in this country about it. One should do this carefully. It is even better if the story is accompanied with the show. To do this Juan Pablo Melo landed on the Island of Liberty to hold a series of seminars and workshops for Cuban fans of martial arts.

The seminars were attended by experts from the Institute of Sport, Physical Education and Recreation (INDER) and the Department of Physical Culture of Manuel Fajardo University of Sciences, Physical Culture and Sport, as well as representatives of the regional centre for sports medicine.

The seminars for judges included practical and theoretical studies. Coaches and athletes were able to improve their sambo knowledge and skills to quickly master the sambo language.

The seminars and workshops held at the University of Physical Education of Granma were of general character; however they managed to make improvements after the National Championship as well.

With regard to the strategic objectives for the development of sambo on the Island of Liberty, of course, educational work for judges and coaches is to be continued here, and athletes definitely need a competitive practice. It is planned to hold a three-day referee course for judges in the near future. Athletes will be able to raise their level on regional championships in Gibara and Havana, as well as compete at the III Cuban Sambo Championship to be held in May.