Issoufou Hamidou Alzouma: "I'm very happy about the praise for the African Championships" 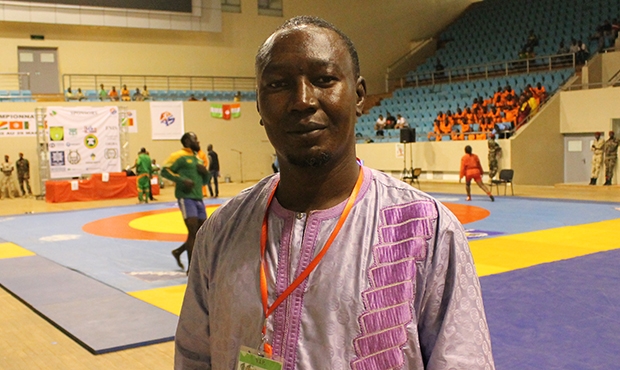 Issoufou Hamidou Alzouma, Secretary General of the Niger SAMBO Federation, did a great job as head of the organizing committee of the 2016 African SAMBO Championships. All the spectators and participants remembered the tournament held in Niamey on May 28 and 29 as a great, interesting and well-organized event. In an interview with the FIAS website, Alzouma said in which category the Niger SAMBO Federation set a record. He also talked about his plans to include SAMBO in the training program for law enforcement agencies, and predicted an increase in popularity of this sport in Niger.

"I'm very pleased to hear the positive feedback from the participants and spectators at the recent African Championships. We made every effort and did everything possible to organize this event and make it a success. I also think everything went well, despite some minor issues. I'm very happy about the praise for the African Championships," Alzouma says.

Alzouma admitted that the organizing committee team was quite small, but said that each member knew exactly what to do and worked very hard.

"Our federation is very young, less than 6 months old (it was previously an association), so you could say we set a record as a very young organization that was able to hold a continental championship. Previously, we only organized competitions and workshops on a national scale, and we're very pleased that our first great experience was successful," Alzouma said proudly.

He also said that following the results of the championship, the national federation must receive more support.

"It's not easy in our country, where sports federations generally don't receive any support from the government. However, at all international SAMBO competitions in which our team is involved, we've become like ambassadors for our country, representing Niger," Issoufou says. "It's also worth noting that athletes from Niger did very well in Niamey, even though for many of them it was their first time at the continental SAMBO championships. Our national team was in third place, which is a good achievement."

A large number of members of the army and police attended the African Championships, not only as spectators, but also as active supporters of their fellow citizens in the stands.

"The presence of so many members of law enforcement agencies may be first major step in getting them involved in SAMBO. They were not only in the stands on both days, but also actively supported our sambists, and watched the fights with interest. They're obviously interested," Alzouma says. "We'll gradually try to introduce SAMBO to the police and army training program. I'm sure SAMBO will come easily to them. In general, everything in our country is very closely associated with the military, so we will obviously try to cooperate with them on all issues and try to introduce SAMBO to the army and police."

Along with the attention to SAMBO from law enforcement agencies, Alzouma also notes a surge of interest among young people.

"Interest in SAMBO in our country has soared. Even during the championships in Niamey, children and teenagers were constantly asking me how they could start training and where they could practice SAMBO. I'm very happy and I'm looking forward to a great burst of activity from young people," Issoufou says.

"I'd like to thank everyone who took part in the tournament and made it a success. I'd especially like to thank the International SAMBO Federation and its President Vasily Shestakov, and the African SAMBO Confederation and its president Dalil Skalli. Without them, the championships would not have been as successful as they were," Alzouma said. "We take a very serious approach to organizing these competitions. We may not be a rich country, but when we feel the support, we make every effort to use it as effectively as possible. Even without much support, SAMBO will be able to sweep all other sports in Africa out of its way. And we have plenty of enthusiasm!"

Finally, the Secretary General of the Niger SAMBO Federation shared his views on the future development of SAMBO in his country and the world.

"I think that if we want to develop SAMBO in the world, we need to invest as much as possible in countries where there is no financial support from the government. It's important to note that the development of SAMBO is impossible without experienced coaches and referees. These experts have to work in all countries where we're trying to promote SAMBO. We need our own experts, who will later be able to teach others. These are important points we have to think about if we want to develop SAMBO and become a truly international sport," Alzouma said.