Ivana Yandrich: “I’ll try to win another medal for Serbia” 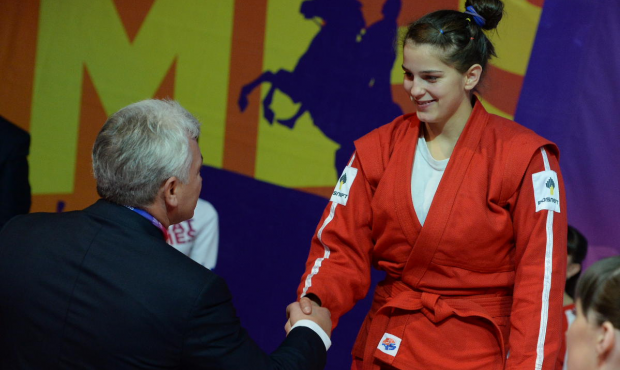 At the II SportAccord World Combat Games SAMBO Tournament the Serbian athlete Ivana Yandrich lost to the Russian woman Marina Mokhnatkina in the final fight. Despite the fact that the fight lasted only 13 seconds, after the Victory Ceremony Ivana didn’t seem upset. Happily smiling, she posed for photographers and received congratulations from the others. The FIAS website also congratulated the “silver” winner and learned about why she is always relaxed before duel meets, to what extent competition in SAMBO had increased, and what her goal for the near future is.

– I was very impressed with the organisation of the competitions. Going to the World Combat Games in St. Petersburg, in fact, I had no idea that everything would be at such a high level. When I saw that the scale of the Tournament was much more than I thought I was pleasantly surprised. And at the end of the competitions I was even more happy because I managed to win a medal – moreover the silver one.

– Is this your first big break?

– Now I mostly perform at the competitions among juniors, so all my advances are there. There are the “silver” and “bronze” of the Youth World Championship and two “silver” of the Youth European Championship in my asset. The SportAccord medal is my first award at the Tournament for “adults”, and I am very happy about this.

– How do you set yourself up for duel meets?

– It’s worth mentioning that I came to the Games to St. Petersburg being calm and relaxed. I like SAMBO largely because of the fact that here I’m able not to get excited before the start. Just show the maximum, which I’m capable of, and I understand that the success will come. My first sport is judo, it is from it I began my experience of the world of combat sports.

Today in Serbia not so many people know about SAMBO as wished it to be. Also in our country combat sports are not very popular, few people know even about Judo. But now many athletes go into SAMBO, because they like to fight in the sport. I’m fond of SAMBO, and I’m good at performing at the SAMBO Tournaments. I began to like SAMBO to bits after judo rules had changed. In Serbia a lot of athletes think so.

– And what can you say about the development of SAMBO in the world?

– It is indeed on the upgrade. This year for the first time SAMBO was included in the program of the Universiade. At every tournament it is felt that rivals have become stronger, and the number of athletes themselves become greater. Earlier there were 4-5 girls in my category, and now there are 12-15 of them there. And I think that SAMBO is becoming more popular. I really hope that it will become an Olympic sport.

– What are your plans for the near future?

– I plan to perform at the Youth World Judo Championship, and then I proceed to the tight purposeful preparation for the World SAMBO Championship in St. Petersburg. I will try to win another medal for Serbia to complete this sports year with the excellent result.

– You’ll be in St. Petersburg the second time already...

– Yes, before the competitions I managed to walk around the city, saw the museums, churches and historic buildings. I liked this beautiful city, it looks like a place where I live in Serbia. This time I couldn’t get myself familiar with some area in St. Petersburg, I think, at the World Championship I’ll be able to go on excursions. But my main goal is still a medal of the World Championship.