Cameroon – for Africa, Africa – for Cameroon 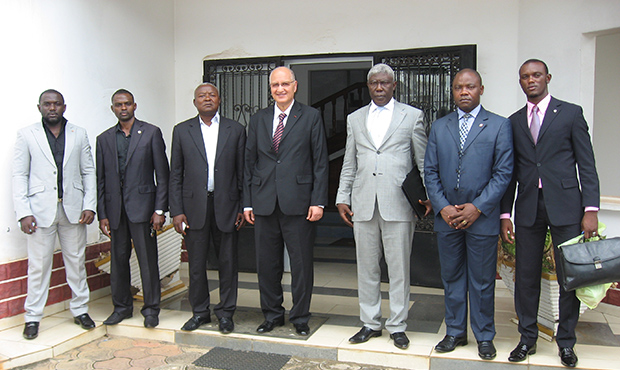 In September the African athletes will gather in Cameroon at the continental SAMBO Championship and compete for the title of the strongest. While they are engaged in preparation for the competitions with coaches, the organisers are making every effort for the Tournament to be held at a high level. In late April, Dalil Scully, the President of the African SAMBO Confederation arrived in Cameroon on a working visit to check on the preparation for the Tournament, as well as participate in a number of important meetings and conduct judicial seminar for local SAMBO athletes. But first things first.

A meeting with members of the Bureau of the Cameroon Nanbudo and SAMBO Federation became the first of the scheduled meetings. Naturally, preparation for the African Open Championship, which starts in September, as well as SAMBO development at the national level became the main issues. Local functionaries told that the organisation of the Tournament is running according to the plan, and a lot has already been done. Following the discussion it was decided to join the National Federation efforts with the Continental Confederation to hold the African Championship.

Coming up on the program of Dalil Scully’s visit talks with Michel Tshoyi, Secretary General of the Union of African Sports Confederations (UCSA), were scheduled. During the meeting they discussed the current issues of development of SAMBO and sports in general in Africa as well as plans for the future were outlined, including those related to the upcoming continental SAMBO Championship. Furthermore, Dalil Scully received an invitation to visit the new UCSA office, which will be opened soon.

The President of the African SAMBO Confederation didn’t need to get acquainted with the President of the African Football Confederation. Dalil Scully and Issa Hayatou are longtime comrades. That is why at the meeting they raised not only business matters, but also shared the recent events of private life. Informal conversation brought constructive fruit: the Presidents agreed that their confederations will work closely and act together for the benefit of SAMBO, football and sports in general – distribution for young people. We will know soon about how it will be implemented.

A meeting with Adoum Garoua, Minister of Sports and Physical Development of Cameroon, was more of official character, but thereon it didn’t become less constructive. The fact that Adoum Garoua treats SAMBO with great respect and have been to the major tournaments in the sport not once, both in Africa and on other continents. During the meeting with Dalil Scully, he reiterated his position on the provision of comprehensive assistance for the preparation and organisation of the Championship in Cameroon. In addition, participants of the meeting, among whom there were also members of the Bureau of the Cameroon Nanbudo and SAMBO Federation, discussed the possibility of holding international SAMBO seminars for athletes, coaches and judges. Dalil Scully took the commitment to support the Cameroonian SAMBO, both materially and technically, making special emphasis on training.

The platform on which the competitions will be held is of great importance for the success of the competitions. Dalil Scully, the President of the African SAMBO Confederation visited Pale OmniSport Multisport Complex in Yaounde, which should host SAMBO athletes in September. He noted that it is really a very high level Sports Complex, which will undoubtedly cope with his mission.

Dalil Scully also visited one more platform – CAF Football Centre of Excellence. This is a large football center of the African Football Confederation, built quite recently – in 2010. It has already managed to host a few competitions in football, and is also used as a training ground for football, volleyball, basketball and other sports. Located in Mbankomo, near Yaounde, it may also be involved in the African Championship.

In addition to organisational affairs, Dalil Scully also managed to devote time to the sports affairs. He conducted a judicial seminar on Sports and Combat SAMBO for the Cameroonian referees and athletes. Participants from all regions of Cameroon gathered in the hall at the Yaounde Institute of Sports and Youth 30. All of them were very interested in the event and expressed the wish that seminars to be held as often as possible. This will enrich SAMBO athletes’ experience and improve their knowledge.

– I am very pleased with the preparations for the African Championship in Cameroon. The Sports Complex, logistics, accommodation – organisers thought out and prepared all the key moments, – Dalil Scully sums up his trip. – In addition, we managed to carry out a number of important meetings that will help to develop SAMBO in Cameroon and on the whole continent. I liked the attitude of Minister of Sports and Physical Education in Cameroon towards SAMBO, and I’m sure he will do his utmost to support our sport. And the African SAMBO Confederation, for its part, incurred heightened obligation to promote Cameroonian SAMBO. Together, we can do a lot!