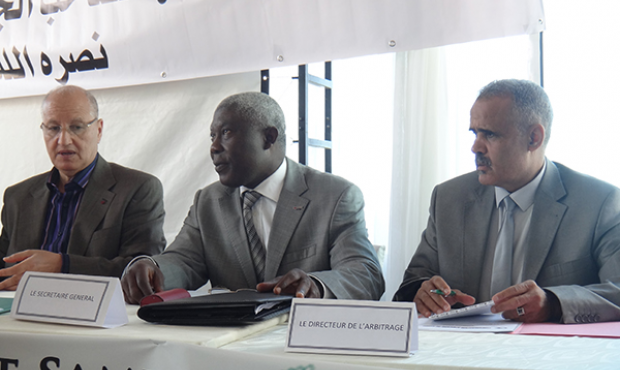 In this report Francois Mbassi will share his considerations on the African SAMBO Championship, tell about what was unique in today’s CAS Congress, and on his dream of SAMBO in Cameroon to become stronger than SAMBO in Russia.

Francois Mbassi – is the second man in the African SAMBO Confederation, he – is its Secretary General. Evaluating the last Congress, Francois said: “Last year we had set ambitious goals for the development of the African SAMBO. Today it is worthwhile noting that SAMBO on the continent has really put on. The result of the work – are new members of the CAS – the Ghanaian and Seychelles SAMBO Federations. We hoped for the possibility of the same procedures in regard to the Cape Verde SAMBO Federation, they have already sent us all the necessary documents, but to take them to the CAS members the presence of the Federation Heads Congress is necessary. Unfortunately, due to the problems with obtaining visas they didn’t manage to come to Morocco now. I think in the very near future, Cape Verde will become the member of the African SAMBO Confederation family.

Taking into consideration the Congress held today I can say that its serious organization pleased us, we completed work on the agenda well and efficiently, all the Federations had an opportunity to speak out and tell about their achievements and challenges in work. Such discussions are necessary to us today, because we are becoming a united and cohesive team. Today applications to host the 2014 African Championship were also received from Cameroon, Tunisia and Algeria”.

The African SAMBO Confederation Congress was held the day after the African SAMBO Championship. We also asked Francis Mbassi to comment on it: “For the first time in the history of our championships, all those delegations that came to Morocco, were presented not only by the Federations Heads, but also brought their athletes to perform. As the result, yesterday we had 15 participating countries among SAMBO athletes. It is worthwhile noting sports success of Niger, Seychelles and Ghanaian teams. Of course, there were some problems in the organization, not everybody was satisfied with judging, but I am convinced that for us – it is the opportunity to analyze the situation and understand the directions for future work”.

He says: “This year we brought the team of 7 people to Morocco, as the result, three of them won the bronze medals of the Continental Championship. For us – it is certainly a success. At today’s Congress we have applied for hosting the next African Championship and hope that our country will win this high right”.

Francis continues: “Now SAMBO is very popular in Cameroon. As well as football was born in England, and the strongest football team of the world is in Brazil now, our aim is to do SAMBO, born in Russia, sports number 1 in Cameroon. I’m sure in a short time the Russians will come to Cameroon in order to practice SAMBO”.

Serious ambitions Cameroonian SAMBO Heads surprised and amazed us, but as we know the intention and desire – are the great things, we have a right to suppose that the Cameroonian SAMBO athletes’ dream is fairly feasible.

The Russians, have an eye in head, don’t slow down the pace of your trainings!