Asian SAMBO Federation Congress: increase in the membership and discussion of plans 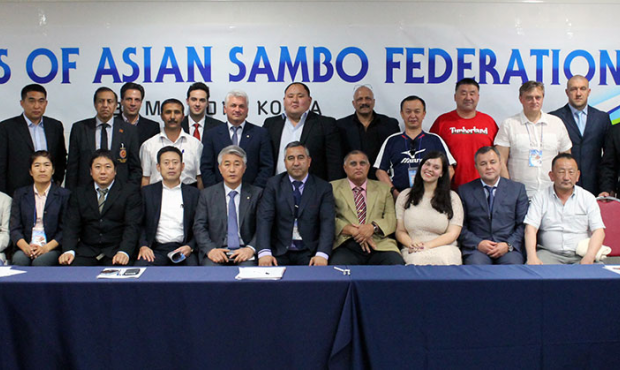 On May 31 in Seoul (South Korea), the Asian SAMBO Federation (ASF) regular Congress was held. Prior to the Continental Championship start, representatives of 11 national federations discussed the most topical issues of SAMBO development in Asia and the world. Our today’s story is about how SAMBO is developing in South Korea who joined the ranks of the Asian SAMBO Federation and about what tournament will be held in Seoul next year.

The first who took the floor was the host of the current Asian Championship – the President of Korean Sambo Association Mr. Jong-Keum Mun. He told about how the preparation for this tournament was carried out and also noticed substantial aid from the International SAMBO Federation. For the first time the Asian Championship was conducted in South Korea and the right to hold competitions of such a high level was deserved by Seoul. Korean SAMBO has been developing for the past 10 years and during this period much has been done. In addition to attracting a large number of athletes, training of highly qualified SAMBO coaches, and resounding victory in major international tournaments, Korean Sambo Association received recognition from the National Olympic Committee of the country in 2009.

As the FIAS Vice President Sergey Eliseev underlined in this connection, to hold the Asian Championship in Seoul is a big step in the development of SAMBO both in South Korea and on the whole continent.

In particular, the President of the SAMBO Federation of India Mr. Suresh Gopi told that in this country SAMBO developed at a leisurely pace for a long time. Having become Head of the Indian federation four years ago, he managed not only to organise regular large-scale seminars for athletes, coaches, and judges, but also to hold the first-ever national championships. Addressing the Asian SAMBO Federation representatives, Mr. Gopi said: “Our role is to help athletes to develop and we have to do it always. I am sure that we obtain whole-souled support from the FIAS. That’s exactly why I’m here.”

The Asian SAMBO Federation Congress delegates approved granting membership to such countries as Sri Lanka, Singapore, India, Iran, Taiwan, and China, which will be received upon submission of a complete package of all necessary documents confirming State registration.

Then the participants moved on to discuss a competition calendar. The Congress participants resolved to approve a provisional competition calendar of the Asian continent for the next 4 years. In addition, each federation could offer their country to hold the Asian Championship, as well as other major events. In the course of discussion the Congress participants concurred that such long-term planning will allow each country to prepare well because it will know in advance what competitions and when it holds.

Literally right off the bat Mr. Moon confirmed this idea with a specific reference. While presenting the candidate of South Korea to host the 2014 World Championship among juniors, boys, and girls he said that usually in Seoul preparations for major tournaments start at least a year before them. This allows to find the most suitable arena and prepare equipment. As Mr. Moon told, in 2014, the World Youth SAMBO Championship in Seoul is planned to be held in the Olympic Park. As soon as the last awarding ceremony at the 2013 Asian Championship is over, Korean Sambo Association will start preparations for the World Youth Championship.

And meanwhile the main characters of SAMBO Seoul are more than 200 athletes of the Asian continent who determine the strongest ones in face-to-face fights on the arena of the famous Korean Yong-In Sports University. You can judge the extent to which the event is significant for South Korea at least by the fact that the biggest national sports channel KBSN, choosing among several international tournaments, gave its preference to SAMBO. That’s why the wide audience of the TV channel, as well as of the FIAS website, will enjoy the broadcast of the Asian Championship this weekend.