FIAS Congress in figures and numbers 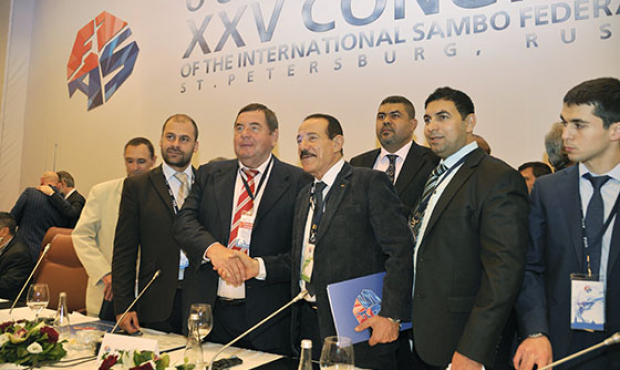 The XXV Congress of the International SAMBO Federation in St. Petersburg has become record in number of participating countries: representatives of 90 national federations took part in the work of the main governing body of the FIAS. However, not only these, but many other figures and the numbers of the Congress make it into the history of SAMBO development. The FIAS website looked at the Congress held, in the light of some of them.

For this number of years Vasily Shestakov was elected to the Presidency of the FIAS following the decision of the Congress in St. Petersburg. It is worth noting that Shestakov’s report was approved by the Congress, and the FIAS work during his Presidency was recognised to be satisfactory. Vasily Shestakov was unanimously elected for the President of the FIAS, scrutineers who followed the procedure of voting, declared the following: “for” – 65, “against” – 0, “abstained” – 0.

The women’s appearing in the management of the FIAS is not only a tribute to the requirements of the International Olympic Committee, which stands for the growth of the women’s role in making decisions at the International Sports Federations. It is also recognition of the merits of Heads of these Federations. Svetlana is the only woman who heads SAMBO Federation in Europe, swimming, judo, and of course, SAMBO are in her sports record. Monique is Head of two federations of her country (SAMBO and Judo), as well as a member of the National Olympic Committee of the Seychelles. She has a volleyball player’s sports record and successful career in the field of sports management under her belt.

The FIAS website compared executive bodies of several sports, close to us and found out the following. There are no representatives of the fair sex in judo and taekwondo, but there are also 2 women in the Bureau of the International Federation of Associated Wrestling Styles (FILA).

This figure is engraved on the case of the gift gold watches, which were presented to the Presidents of the National Federations-members of the FIAS at the XXV Congress of the International SAMBO Federation. This year is the anniversary for SAMBO, not only hearts of the leaders of the national SAMBO of different countries will tap a rhythm now, but also the clock mechanism on their wrists. In the year of its 75th anniversary our favorite combat sport is striding across the planet more and more confidentially – SAMBO competitions are held under largest multi-sport tournament in the world. The 2013 Universiade in Kazan, the World Games in Cali, the II SportAccord World Combat Games – this year SAMBO athletes all over the world have a lot of opportunities to express themselves at the prestigious competitions.

It’s the number of times the Ukrainian Viktor Savinov, a newly elected member of the Executive Committee of the FIAS, has won the World SAMBO Championships. Viktor is a unique athlete; he has won the “gold” of the planetary SAMBO Forum in two weight categories – 68 and 74 kg. At the 2012 World Championship in Minsk, he became the “silver” medalist in weight category of 82 kg and performs in this weight category up to now.

Thus, after the Congress in St. Petersburg, it became hypothetically possible that in November this year in St. Petersburg current member of the Executive Committee of the FIAS will get on the podium (or even will become the 8- time world champion).