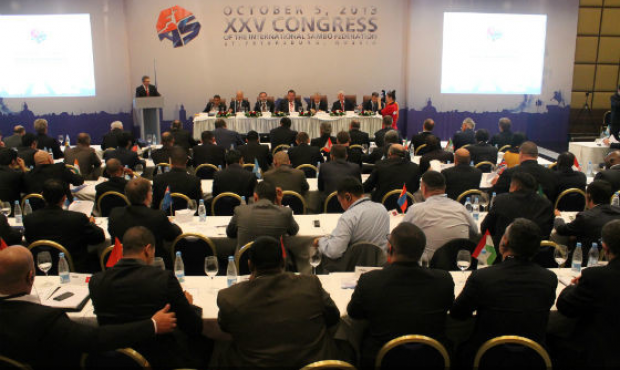 An unprecedented number of participating countries registered for the FIAS Congress in St Petersburg, with 207 delegates from 90 national Sambo federations from five continents taking part in the work of the main body of the FIAS administration.

The first item on the Congress agenda was inducting new members into the world Sambo family. The decision was made by vote to include nine national Sambo federations in the ranks of FIAS. Among the European newcomers were the Czech Sambo Union and the Sambo Federation of Hungary; Pan-America was represented by the Federations of Nicaragua, the USA, El Salvador, Trinidad and Tobago and Guatemala; Africa was represented by the Seychelles and Asia by the Federation of Singapore.

After the instantaneous acquisition of new members of the world Sambo family, it was time for the reports on the work performed between 2009 and 2013 from FIAS President Vasily Shestakov. In his speech, Vasily Shestakov touched on the main spheres of development of the FIAS in which major results have been achieved recently: the work on anti-doping, educational programmes, raising the standard of continental championships, participation by Sambo wrestlers in the 2013 University Games in Kazan, promotion of SAMBO within FISU, establishment of a British Commonwealth Association and work on integrating SAMBO into multi-sport games.

Vasiliy Shestakov was followed by Senior FIAS Vice-President Andrey Kliamko, who reported to the Congress participants in the FIAS finances for 2013. The work of the FIAS during the reporting period and Andrey Kliamko’s financial report were recognised as satisfactory by the representations of the national Sambo federations.

The next decision made by the Congress proceeded from decision of the FIAS Executive Board taken in March this year. At that time, Fazliddin Pulatov, Mikhail Shults, Nikolay Lents and David Rudman were removed from their posts and their powers within the FIAS were terminated until the next regular FIAS Congress. By a majority vote, the St Petersburg Congress approved this decision.

The new leadership of the FIAS is as follows: Secretary General – Roberto Ferraris, 1st Vice-President – Andrey Kliamko and Vice-Presidents – Dalil Skalli, Cesar Chu, Sergey Eliseev and Alamjon Mullaev. Seventeen people were elected members of the new FIAS Executive Committee, this being the same number as before but there were some personnel. For the first time since its inception, SAMBO was joined by two women: President of the Sambo Federation of Austria Svetlana Sokolik-Neubauer and head of the Sambo Federation of the Seychelles Monique Athanase. Also for the first time, the FIAS Executive Committee was joined by head of the FIAS sportsmen’s commission, the well-known Ukrainian Sambo wrestler and 7-times world champion Viktor Savinov.

The Congress is still in full swing.