Congress of the Pan American SAMBO Federation in Panama 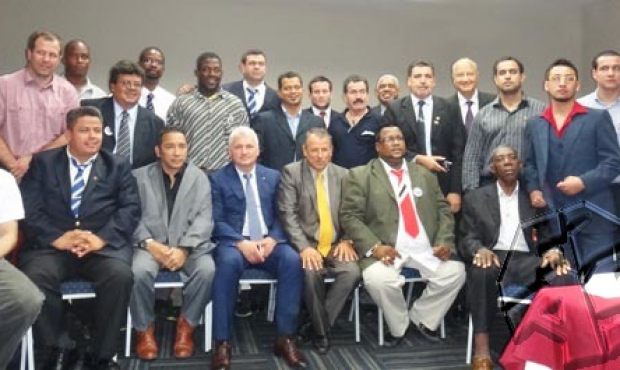 On June 14, in the state, which among other things is famous in the world for the fact that the famous Panama Canal, connecting the Gulf of Panama of the Pacific Ocean with the Caribbean Sea and the Atlantic Ocean, is located on its territory, the Pan American SAMBO Federation (FEPAS) Congress took place. At its time the construction of the Panama Canal was of extremely great geopolitical importance. The Congress carried out yesterday will certainly be of great importance for the development and advancement of SAMBO in Pan America.

The Congress was held in the conference hall of the Central Park Hotel, a place which housed all the competitors of the starting Pan American SAMBO Championship. The current Congress broke the records for the number of delegates who took part in its work. Representatives from 25 countries of Pan-American SAMBO have flown in to Panama to participate in the Congress.

The meeting of the main body of the Pan-American SAMBO was started by Caesar Chu, the President of the Panamanian SAMBO Federation: “I am pleased to welcome everyone present here today. SAMBO unites all of us and I am pleased that our SAMBO family is growing and gaining strength. The number of countries participating in today’s Congress and the competitions which start tomorrow really prove it. And I am proud that my country and our SAMBO Federation are art and part in it”.

The Pan-American SAMBO family has increased, but the management has changed. The thing is that Juan-Pablo Melo, being the President of the Pan American SAMBO Federation and Argentine SAMBO Federation as of the time of the Congress, resigned from his post as Head of FEPAS at the Congress. In connection with this Melo’s decision the Congress meeting had to hold elections for a new President, General Secretary, and members of the Executive Committee of FEPAS.

We were able to talk with C-suite of the newly elected Pan American SAMBO Federation. Omar Lopera Tamayo said: “Today we witness a historic moment for the Pan-American SAMBO: 25 countries will take part in our continental championship and it’s certainly the FEPAS former President Juan-Pablo Melo’s merit. Our working group, as I call it, which was elected today will continue the work already started and try to take a step forward. Our goal for the nearest future is to increase the number of members of our Federation up to 50.”

And the newly elected FEPAS President commented on the starting tomorrow Pan American SAMBO Championship as follows: “It will be an amazing championship. It is already clear that there will be many participants, interesting and competitive fighting is expected. Particularly, I think it’s worth expecting a lot from Combat SAMBO as this year a lot of competitive fighters of this SAMBO discipline have come to Panama.”