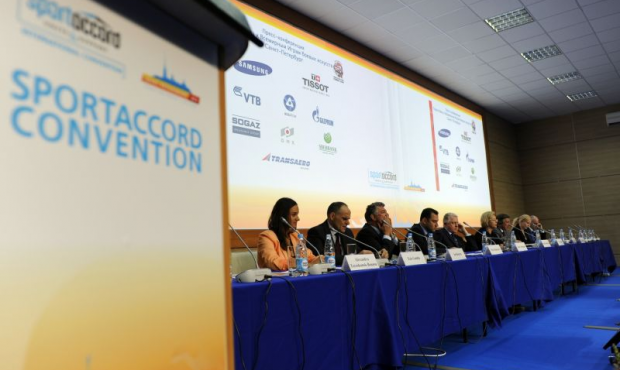 There is a holiday in St. Petersburg – it celebrates 310 years since its founding. The anniversary rushes the Petersburgers off their feet to tell visitors about the city they have a heart for with particular proud. But if the locals usually emphasize the architectural features and the abundance of museums and theaters in the cultural capital of Russia, these days they had a reason to talk about St. Petersburg as a great sports city. The fact is that from May 26 to 31 in St. Petersburg they hold the International SportAccord Convention.

According to the news on local TV channels, now there are three main topics for discussion in St. Petersburg: the Town Day, sports and weather. We have already mentioned the first two, we’ll touch on the third. Forecasters have tried and “conjured” the excellent spring in St. Petersburg – clear sky and warm sunshine. And if you remember the famous St. Petersburg’s “white nights”, which will soon appear in all its glory, it seems that there is nothing better. Many tourists who come to St. Petersburg every year in late spring – early summer agree with this.

By the way, if now the majority of foreigners need a visa to get into the cultural capital of Russia, in October some of them, to be exact – the athletes and delegates of the SportAccord World Combat Games – will be able to visit St. Petersburg without the procurement of visas. Natalia Parshikova, Deputy Minister of Sports of Russia told journalists about it. She stressed that it became possible thanks to a special Decree of the President of Russia Vladimir Putin. 2013 World Combat Games will range among the major sports forums, such as the Universiade in Kazan, Sochi Olympic Games and the 2018 FIFA World Cup.

It is interesting to imagine what polyphony of alien speech St. Petersburg expects in October, if already now in the Lenexpo exhibition center, where the work of the SportAccord Convention is organized, it is difficult to hear the conversation in Russian. The majority of the Petersburgers – from organizers to volunteers – have switched over to English and habitually communicate even with each other in the language of Shakespeare from time to time.

“I’m surprised by the Russians’ level of English”, – we hear the words of the representative of the United Arab Emirates. “If our all Russian partners have such a good command of a foreign language, we could cooperate with each other more productively”, – expresses his point of view the participant from the UK. Representatives of the Russian party say that they are well aware of the importance of understanding and demonstrate their success in this business.

Among those, by the way, there is information from Pavel Zhuravlev, head of the Directorate of the 2013 World Combat Games there. He noted that thanks to the collaboration of 15 international federations, the Russian Government and the Organizing Committee of the competitions, St. Petersburg will become not only cultural, but also the sports capital of the country in October. Head of the Directorate also presented the official pictograms of all 15 sports that will be presented at the Games. They are approved by the international federations.

Joel Buzu, head of the Peace and Sport International Organization told about the fact that a common language can be not only English, Russian or Japanese but the all-countries one – the language of sports. He pointed out that only martial arts have a special philosophy between the rivals, based on respect for each other. This makes it possible to band the society together and solve social problems. The values of martial arts were also pointed out by Hein Verbryuggen, the SportAccord President. “2013 Combat World Games – is an elite event, which contributes to the development of friendship. We are very happy to hold them here in St. Petersburg rather than elsewhere”.

Well, there is some time before the start of the Games, that all the interested parties can spend on reaching new productive agreements. And SportAccord Convention, which takes place in St. Petersburg these days, will contribute to the rapprochement of international sports organizations.