SportAccord Convention in St. Petersburg: 15 combat sports at the same site, SAMBO at the World Games and against doping 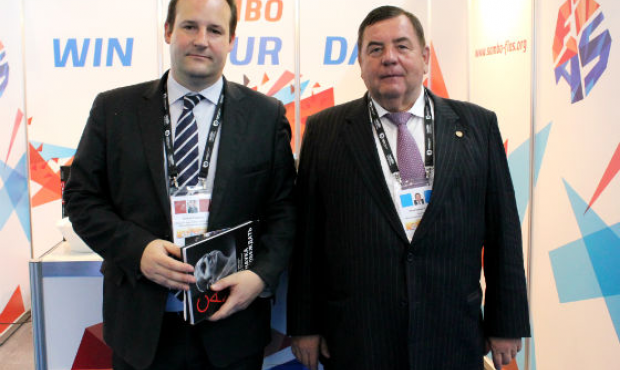 In this report we’ll tell you about the presentation of sports – participants of the II SportAccord Combat Games, conversation about the possible SAMBO participation in the World Games, the role of combat sports in the fight for peace and education of young people, as well as further joint effort of FIAS and WADA.

Today in the Lenexpo exhibition hall in St. Petersburg, where the annual SportAccord Convention is held these days, the morning started from the grand presentation of the II SportAccord Combat Games. All 15 sports, which athletes will perform in the framework of the Games as early as in October, submitted short show-programs to approval of the Convention participants to foot tapping music, the audience’s applause and numerous camera flashes. On this day SAMBO “face” was perfect and smiling, because 2 lovely and graceful female SAMBO athletes, the new-sprung European champions – Marina Mohnatkina and Nadezhda Zaitseva came on the mat of the demo site. Masculinity and athleticism of Combat SAMBO athletes – Mikhail Mohnatkin and Denis Goltsov served as a foil to the girls’ beauty.

Charged by the vivid presentation run, all participants of the Convention got down to work with triplicate force. The work mainly consisted of meetings and negotiations – those elements which new projects and enticing prospects are generally born of then.

If FIAS has yet to work in this direction, the joint activities of FIAS and the Peace and Sport organization began a year ago, and now this cooperation is developing very fruitfully. Last year FIAS participated in the Friendship Games – a project of this organization, which purpose – is the assistance of young people and teenagers in areas of post-war conflicts and economic cataclysms. In order to discuss FIAS and Peace and Sport prospects Vasily Shestakov met with the President of the organization Joel Buzu today. He said: “I am grateful to FIAS that it has actively involved in cooperation with us and takes an active part in all our projects. I believe that combat sports in general, and SAMBO in particular are powerful and efficient instrument, by means of which one can properly educate young people and guide them in the right direction. This is especially important for those young people who live in areas of post-war conflicts. This is our target audience, and I am glad that SAMBO is involved in the work, so important for the future of the world”.

WADA also does important work in the world, fighting for a “clean” sport without doping. SAMBO has entered this fight very actively. Today the FIAS President managed to talk about doping with Frederic Donze, Head of the WADA European branch. At the meeting Frederic said: “The way which is worked up by other federations for several years, FIAS managed to work up an amazingly short space of time. I am grateful for the partnership. FIAS cooperation with the SportAccord Anti-Doping Department turned out to be very effective. We hope that later on our joint effort – of WADA, FIAS and SportAccord – will be the same as it is now: creative and productive. We have much to do along the way, I’m sure in such a team everything is within our powers”.