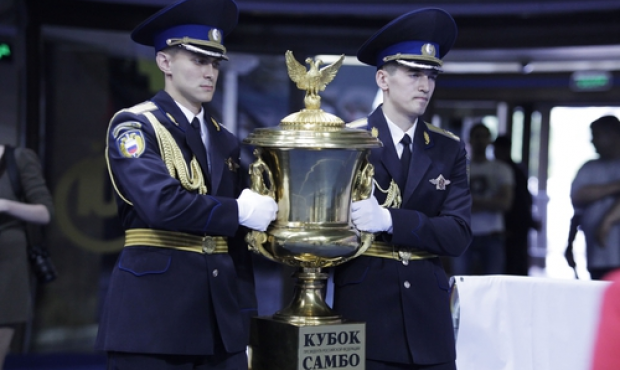 SAMBO Cup of the President of the Russian Federation will be held the eighth time in Moscow on June 6. The current tournament will differ from all previous ones greatly. If earlier it was a competition, which representatives of the various countries of the world took part in, now the format of the event has changed. For the first time in the history teams of the Russian law enforcement agencies as well as the country’s youth team will compete for the Cup. It is for these institutions important to apply SAMBO not only on SAMBO mats, but also in their professional activities.

It is interesting that recently the importance of SAMBO for Russian law enforcement agencies was discussed not only at the talks of high officials, but confirmed in practice. During the meeting with Sergey Eliseev, President of the All-Russian SAMBO Federation (WSF), Lieutenant General Anatoly Yakunin, Head of Ministry of Internal Affairs of Russia State Institution in Moscow, supported the initiative of the All-Russian SAMBO Federation – to open specialized gyms for police officers’ professional going in for SAMBO at each police department. Herewith, he stressed that “SAMBO is the only form of combat sport, which today should enter service of the police officers”.

Maxim Novikov, Deputy Chief of Police for Fieldwork of the Ministry of Internal Affairs Department of the Krasnoselsky District in Moscow, confirmed that his words don’t have a leg to stand on. He accidentally turned out to be at the scene of the crime by car and apprehended the suspect in the Russian capital, having applied SAMBO techniques.

“All this happened in the full view. I saw a criminal producing a series of shots at the driver’s side of the car, and the person who made the shots, tried to escape. I decided to follow him, after that I asked a friend, who was driving, to make the ram and taking advantage of the suspect’s confusion, ran out of the car and applied SAMBO techniques for his caption”, – said the policeman.

He added that people who were next also helped him. According to him, the apprehended person tried to shoot, but he was neutralized.

Thus, it was confirmed once again that SAMBO is not only very beautiful and spectacular sport that is loved by the audience worldwide, but effective applied combat sport, which helps representatives of law enforcement agencies in their professional activities. However, law enforcement officers do not forget about competitive practice. We will know about the best one at SAMBO Cup of the President of the Russian Federation, on June 6.

“The tournament will be still referred to the Cup of the President of the Russian Federation, – comments on Sergey Eliseev, President of the All-Russian SAMBO Federation. – But this year, not only foreign national teams but also teams of law enforcement agencies of Russia, will participate in it. They are national teams of the Ministry of Internal Affairs, the Federal Security Service, Ministry of Emergency Situations, Interior Troops, Armed Forces, the Federal Service for Execution of Punishment and Drug Enforcement Agency – the representatives of the agencies that develop SAMBO in our country. The Russian youth team will be the eighth contestant. T tournament might bear the Russian one instead of the international status, because the major task while conducting this competition is to promote SAMBO in our country. And the status of the tournament will give greater impetus to the development of our sport”.

As a reminder the tournament was established in 2006 on the initiative of the All-Russian SAMBO Federation by the Decree of the President of the Russian Federation Vladimir Putin. First the prestigious trophy was competed for in 2007. It was conducted among the strongest teams on the basis of the world rankings. Throughout history of the tournament anyone of the competitors didn’t manage to win the Cup from the Russian team, and the movable trophy has never crossed the border of the country.