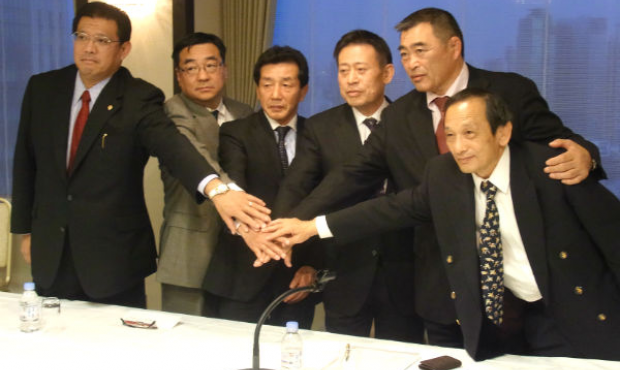 As previously reported, on the second day of the second month of the coming 2013 year the Land of the Rising Sun will host the SAMBO Japan Championship among students. Even now the Japanese student tournament catches the mass media’s and combat fans’ eyes with its respected name – “Russia’s President Vladimir Putin SAMBO Cup”.

The tournament among the school youth will be held in the Saitama Kenritsu Budoukan Hall in Saitama, a city located in Saitama Prefecture on Honshu Island. The Cup bearing such a noble name is obviously self-sufficient, but it is also aimed at one more important thing – it will be the qualification stage for Japanese team to participate in the SAMBO competitions within 2013 Universiade in Kazan.

On 21 November in Tokyo, on the eve of this event which is of the essence for the Japanese SAMBO, a press conference dedicated to the mentioned February championship was held.

All people of importance for the development of the Japanese SAMBO, including Nobuyuki SATO, the President of the Japan Judo Federation; Masaaki KONDO, the President of the SAMBO Federation of Japan, and Nobuyuki ASAI, the Yasuhiro Yamashita’s assistant, the member of the FIAS Executive Committee and the Chairman of the Organising Committee of the coming tournament, except for the inspirational legendary judoist Yasuhiro Yamashita took part in the conference.

The press-conference primarily referred to the arrangement of the tournament and in general to the modern development of SAMBO in Japan.

“Currently we are solving a major problem for us – getting judoists and wrestlers (free and Greco-Roman style) together and preparing them for SAMBO. So far, about 30 athletes have already been practicing SAMBO to win the first SAMBO medals for Japan within the Universiade. Next year in May the FIAS representatives are going to hold a seminar for our athletes and coaches, which, I believe, will help us reach our Kazan goal”, the President of the SAMBO Federation of Japan Masaaki KONDO says.

“I triumphed in 1977 Universiade in Bulgaria and this event is still in my mind. Obviously, participation in the Universiade is a great event in the career of any athlete. This is amazing that along with the inclusion of SAMBO into the programme of the coming Universiade we are now able to give our athletes one more chance to write their names in the chronicle of the world student sports”, the President of the Student Federation of Combat Sports of the Western Japan Nobuo FUJISAWA comments on the future participation of sambo wrestlers in the Kazan Universiade.

Now let’s have a brief look at the coming event. This time a person who knows everything on the future event takes the floor - the Chairman of the Organising Committee of the February tournament Nobuyuki ASAI. “The fact of giving such a respectable name to this first SAMBO tournament in the history of Japan is really important to us. We are delighted to think that the Russian President practiced and succeeded not only in judo but in SAMBO too. It’s a pity, just a few outside Russia know about that, but I’m sure that thanks to our tournament this fact shall receive wide advertisement. We cannot choose but do our best to hold the tournament at the highest possible level. We will take great pains to live up to the respected name of the Cup, which will definitely promote further prosperity of SAMBO in Japan and in the world”.

In our reports we have been always emphasizing the fact that SAMBO is like a family, so now we are especially excited to have someone from Japan as members of SAMBO Family.