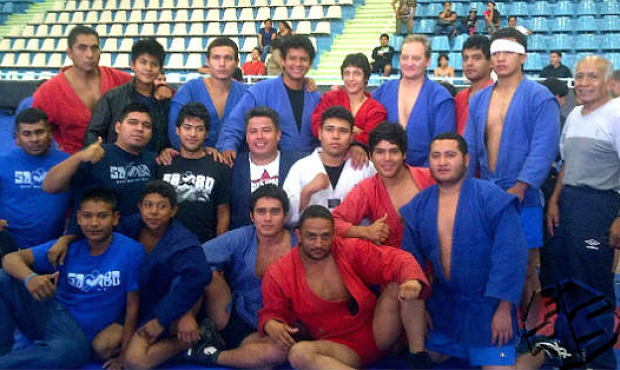 The history of SAMBO development in Mexico goes further back than just 10 years. The mexican students, who were studying in the USSR in 70's, brought home not only the professional knowledge and new skills, but also the new sport of SAMBO, which was not broadly known at that time. It was logical that shortly after, the representatives of SAMBO Mexico joined to sign the FIAS Foundation Protocol at the historical congress in Madrid in 1984.

Notoriously, there are personalities which make the history - the same was happening in the history of Sambo. The person known to be as the 'face' of Mexican Sambo, was Emilio Alonso from Venezuela. In 2003 he was elected as the first president of the Pan-American Sambo Federation. It is said that spiritual teachers spread the spiritual truths, and the same goes for Emilio and his numerous seminars, which he had done all over the country, converting many into his followers - coaches and athletes in Sambo.

Most importantly, it was the true love for Sambo and the dedication displayed by many of them throughout their lives, that they have gained from Emelio Alonso besides the sports knowledge and skills. Emilio made a significant contribution to the promotion of SAMBO in the National special services and structures; under his guidance, Sambo was introduced to the special forces of the Mexican Army and police.

The modern days SAMBO Mexico hero is Antonio Ramirez, the President of the Sambo Association of Mexico. His club in Acopulco, holds the status of 'Academy of Sambo', and was created as a replica of the famous Kstovo Sambo Academy (in Russia). It was Antonio's several visits to Nizhny Novgorod for SAMBO studies and SAMBO practice, under the supervision of the outstanding Russian coaches - Michael Burdickov, Michael Kulkov, Gennadi Bogdanov that led him to accomplish the successful «cloning» of the famous Academy. Antonio has not only adopted the philosophy of Russian Sambo, which is initialy based on respect and high morality, but also the idea of free education. After all, there are many children who attend the Sambo classess for free in the Acedemy of Sambo in Acopulco, especially those from low-income families.

Sambo is also an established sport in the Mexican State Polytechnic Institute, where sport is elevated to the rank of major subjects. Andrew Moshanov has evaluated the (basis) of the institute as following: «The astonishing was my introduction to the fantastic institute premises, which could be envied by any sports institute. Judge for yourself: 50 meters swimming pool, athletics track, gyms for wrestling, judo, boxing, and now Sambo. By the way, the Sambo athletes practice in this facility 4 times a week. It is remarkable that the Polytechnical Institute state-of-art sports facilities annually host from 5 to7 international events in various sports.»

Mr. Enrique Jimenez Vargas, Director of sport, wrestling and Sambo coach, continues: «our doors are always open for Sambo, and we are instantly ready to host the Sambo competition of any level on the basis of our institute. There is one another unbeatable advantage of our premises – it's promixity to the Metro, and this is an important factor in such a big city of almost one and a half thousand square kilometers and a population of about 23 million people».

It is quite common that every big city accomodates various sports. There is a room for everything within the big city: high performance sports, recreational sport, various events. Mexico city is well known for having all of this, hence the city saw the first Pan-American Sambo Championships in 2004, staged in the Sports Complex «Gelatau».

They say, that the life goes on in circles. 10 years later the circle of life brought everyone back to the same Sports Complex «Gelatau» . The end of March saw the SAMBO Seminar for coaches and athletes, arranged by the Development Department of international SAMBO Federation. During two days 105 coaches and athletes from 15 clubs representing 10 States of Mexico were sharing and learning the new Sambo skills under the guidance of Andrew Moshanov - Director of the Department of Sambo Develoment of FIAS.

Andrew comments: «I saw coaches who studied SAMBO with Emilio Alonso nearly 10 years ago. I truly appreciate their sound technical level. Without any doubt, this is a credit to a great athlete and coach Emilio, whom I would like to thank».

The President of the Mexican Sambo Association, Antonio Ramirez complements: «At the moment, we are naturally short of the athletes of a high level, but we are always participating in the events of FIAS with great enthusiasm. We have big ambitions concerning the development of this glorious and exciting sport in our country. As we have a good opportunity to benefit from our collaboration with the International Federation of Sambo, we are particularly exited. For us, the dream came true; both the athletes and coaches were very satisfied. As a coach I have to admit , that the level of motivation of my athletes showed the dramatic increase after this seminar , they are hardly to miss any training session now».

I could say that I literally serve the Sambo. I have sacrificed a lot, to include the time underspend with my family and kids, but I have never regretted it. Because, I see increased level of Sambo in my country, and the opportunities that arise for the athletes in this sport. This gives me more and more strength to continue working for the development of Sambo in my home, in my Mexico».

The seminar ended up with a series of matches between athletes of the different provinces to strengthen the theorical part. The refereeing practicum was lead by the well-known and accomplished sambo athlete from Venezuela, Luis Adrinaza (few times Pan-American Sambo Champion, and a winner of the A. Astakhov World Cup stage), and was also a valuable lesson for all the coaches and referees.

Particularly, this 'refreshment refereeing display' helped all participants to consolidate the acquired knowledge in both, the training methodology of Sambo and in referreeing. And this knowledge will be soon very much needed, as in a month's time, the first ever official Mexican Championship will be held in Mexico city. It will be the selection event for the Sambo team for Mexico prior to the Pan-American Championship to be staged in Panama in June .

The developments in the corporate affairs of the Mexican Sambo saw the First National Conference held in the Hotel «Casa Blanca», where representatives from 15 clubs discussed the various matters of SAMBO development in the country, to include the participation of the mexican Sambo athletes in FIAS competitions.

During the Conference the Sambo Mexica leaders set for themselves ambitious tasks. They are difficult, but achievable: to implement the «National Program of Sambo Development» project, and also to receive the recognition for the Mexican Sambo Federation, which will take first of all to meet in full the requirements set by the Ministry of Sport and Olympic Committee of Mexico for every National Sports Federation.

«The tasks to be accomplished are quite extensive; yet the people who have taken them on board are not the ordinary ones, as I was led trusted. Therefore I am certain that in the near future Mexican Sambo will have the recognition, and an action plan for th enational development, and also the athletes of a very high level.» - resumed Andrew Moshanov on the results of his Mexican experience.