The European Youth Championship in Cyprus: international dances, Georgian wrestle in a kneeling position, Russian will power, and Cyprus organization 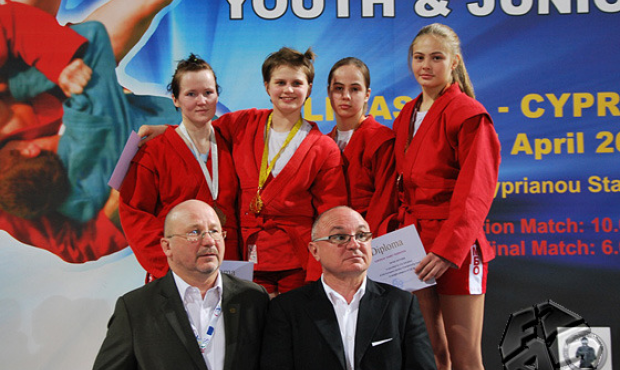 At 6:00 a.m. in Cyprus your obedient servant, the FIAS press attaché and representatives of the press pool of the International Sambo Federation were on the Mediterranean Sea. Someone was engaged in the cross country running, someone was sunbathing, and someone was swimming in the sea. But each of us gathered energy before the forthcoming working day at the European Championship. And we did need that energy, as we being media workers wanted not only to watch this interesting and impressive Cuprus competition but to make comments in the broadcasting, make a video coverage or report. We wrote, reported and made video about the European Sambo Championship among young men and women, junior boys and girls, held in Limassol under the aegis and with the support of International Sambo Federation.

Presenting the results of the first day of this youth competitions, I would like to describe generally the starting competition day of the Championship in Limassol.

From our childhood from Greek mythology we remember the legend about the goddess of love Aphrodite coming out of the sea foam to the ground here in Cyprus. Probably that is why the opening ceremony of the Championship was filled with dances, a branch of art favoured by the goddess. There were diverse dances: Cyprus, Greek, Ukrainian, and Russian. The dances were followed by sambo, not less beautiful but martial branch of art.

Among other things an impressive wrestle of juniors in the weight category up to 48 kg where Armenian Djivan Gazaryan and Georgian Georgiy Melkuashvili met. Traditionally Armenian athletes (as well as Georgian ones) do not wrestle in a kneeling position. They do not like it, do not use it and are not interested in it. What was the surprise of audience, sambo specialists and experts when Djivan fairly wan this final battle by the painful arm lock! Beside the happiness for him we felt proud for the Armenian sambo school, which is developing, enriching and therefore capable to make such joyful and spectacular surprises. Also I would like to note, that now Djivan Gazaryan can be truly considered the Armenian sambo athlete who properly carry on traditions of the legendary Gurgen Tutkhalyan, the four-time champion of the world, who in 90th of the past century was famous for his phenomenal wrestle in a kneeling position.

The only description of the victory of Ekaterina Tkacheva from Russia in the weight category up to 56 kg in the young women age category is a heroic deed. The thing is that Ekaterina picked up an injury while warming up, therefore her participation in the championship was questioned. Conversation with the coach, tape on the leg, pain killing injections, winner of the Cyprus championship – that is how Ekaterina made it. But she is the champion who wan not only her competitors, but successfully overcame pain, self-pity and weakness. From our part we express our respect and admiration for her.

Before announcing the list of winners and awardees of the first day of the European Championship in Limassol, I would like also to express my delight and respect for the Cyprus Sambo Federation. I should note accuracy, arrangement, and fastness, which governed at organization of sportsmen coming to the competition area and of the awards ceremony. This accuracy allowed the today’s online broadcasting on the FIAS web site to be transferred properly and precisely without any delays and pauses. Especially for this we being sambo fans express our gratitude to Cyprus colleagues.

Here are the results of the 1 day European SAMBO Championship on Cyprus.