We Hope for Olympic Recognition of SAMBO in the near future 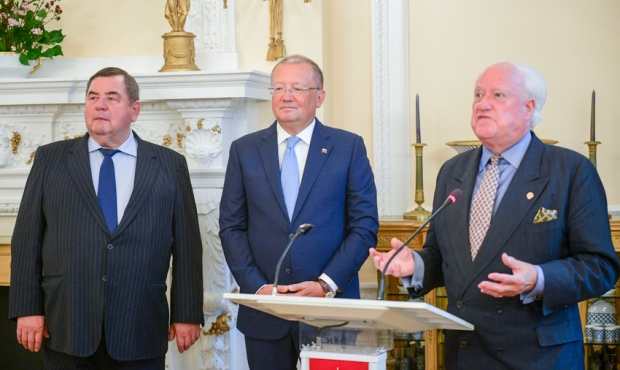 The statement was issued by FIAS President Vasily Shestakov at the reception in the residence of Russian Ambassador in the UK Alexander Yakovenko.

The reception on the occasion of the fourth President`s Sambo Cup took place on the 29th of September in London, UK. Representatives from a number of countries where SAMBO is being dynamically developed attended the reception held by Russian Ambassador. Delegations from the UK, the USA, Cyprus, the Netherlands, Mexico, Ghana, Trinidad and Tobago and other countries participated in the meeting. Russian Ambassador in the UK Alexander Yakovenko, President of the British Commonwealth Sambo Association Michael Parker, FIAS President Vasily Shestakov and British Sambo Federation President Martin Clarke welcomed the attendees.

Head of FIAS Vasily Shestakov in his speech drew attention to the fact that “SAMBO is not just a sport but a family that currently comprises representatives from 120 countries. And SAMBO is a kind of a bridge for ordinary people that leads to mutual understanding and friendship when things get rough”.

“Nowadays SAMBO is being rapidly developed worldwide. SAMBO was included in the Asian Indoor & Martial Arts Games Programme for the first time; the Games took place in Turkmenistan. SAMBO competitions have already become a part of the European Games and the Central American Games. Negotiations have been ongoing to add SAMBO to the list of sports that will form the programme of the African Games. So, we are at the last frontier now, but I hope we will overcome it soon and SAMBO will finally become an IOC-recognised sport”, – he added.

“Athletes from at least eighty countries have taken part in the latest championships. Fifteen countries provide live coverage of the World Championships at this time. About 360 thousands of people visit the official FIAS page on Facebook every day during major [international] competitions in order to gain information on athletes’ performance. American users are on the first place while users from the UK have taken the second place; as for Russians, they`re only eighth”, – said the FIAS President.

The fourth President`s Sambo Cup will take place on Saturday, Sept. 30, in the University of East London. Teams from the USA, Russia, the UK, England and Scotland, the Netherlands, Cyprus, Mexico and Ghana are going to face one another on the mat in the battle for winning. The Combat Sambo Grand Slam will bring together sambists from Poland, the UK, the USA, Russia, Slovakia, Mexico, Trinidad and Tobago, Jamaica and Aruba.

“Today we are witnessing that the level of the tournament is growing from year to year and participants are becoming stronger and stronger as well. We expect SAMBO to develop more rapidly in the UK due to hosting the President`s Sambo Cup. SAMBO has strong roots in the UK; many athletes from this country have become medallists at the European Championships and World Championships. We are grateful to the “Rosneft” Oil Company, our general sponsor, for taking an interest in SAMBO. We commend mass media and also pay thanks to Russian Ambassador in the UK for the President`s Sambo Cup to be hold”, - noted Vasily Shestakov.